Atlantis of the East

Majority of people wish to not only travel to visit a gorgeous getaway location for vacation but also to make meaningful memories and connections. Others hope to gain valuable knowledge and surround themselves with plentiful history. Finding a unique place that fuses these prospects of being aesthetic, entertaining, and educational, which is also family-friendly, is an appealing commodity for the diversity of taste and finesse.

“Atlantis of the East” is an architectural proposal that delivers guests to an ancient underwater city of China. Located 40 meters below the beautiful Qiandao Lake in Shicheng is the historical Lion City built in the Tang Dynasty more than 1000 years ago. The government’s construction of Xin’anjiang Reservoir in 1959 sank the city and coincidentally created an artificial lake with thousands of islands around. The city was named after the Wushi mountains, which stands for “Five Lion Mountain” and was once the center of politics, economics and culture.

We propose a holistic experience that immerses our guest in the rich historical context of the people that once roamed the Lion City. By combining an architectural infrastructure with innovative use of underwater submarines and augmented reality technology, we hope to bridge the distance between time and place to bring the past and present together. 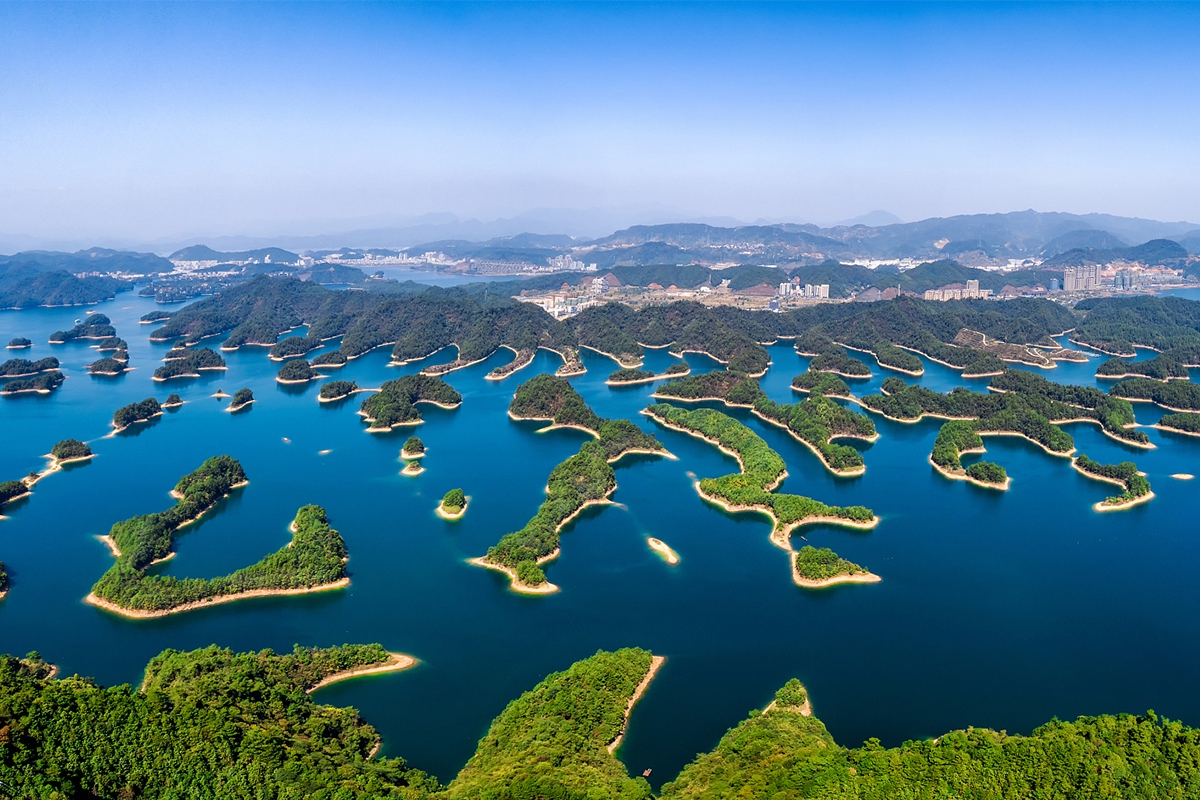 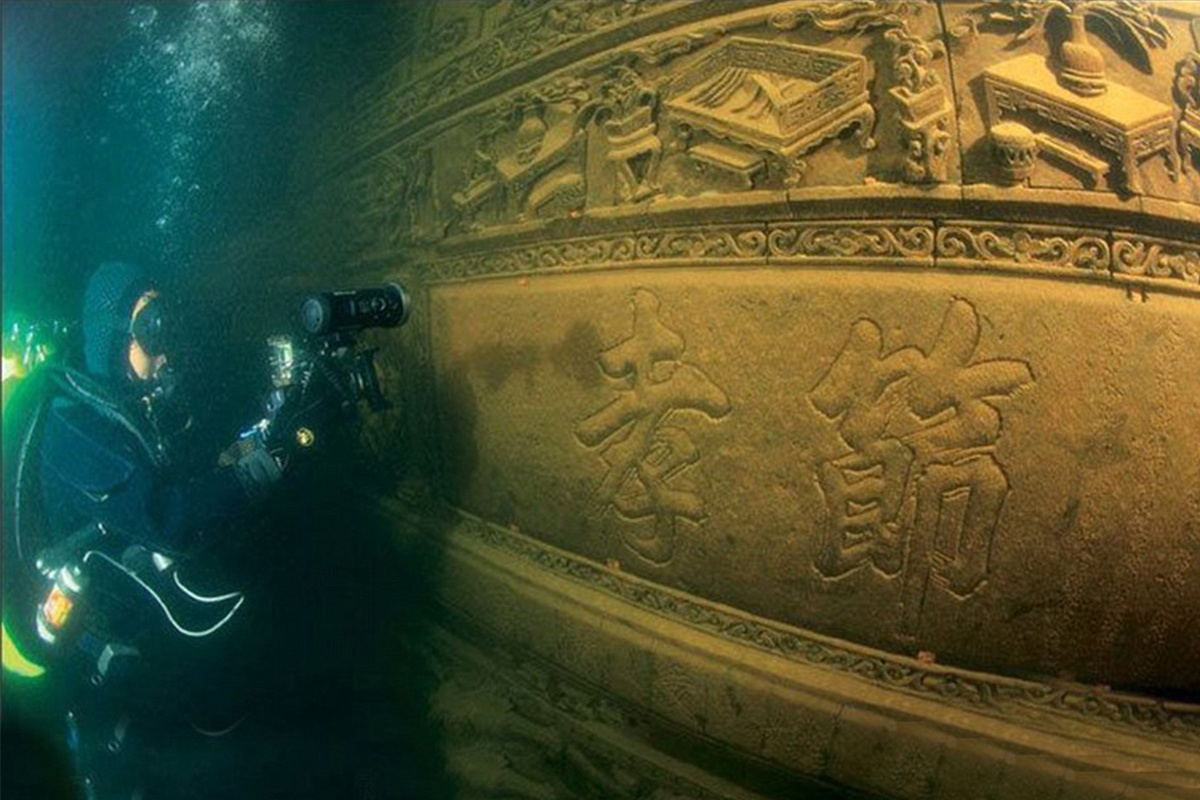 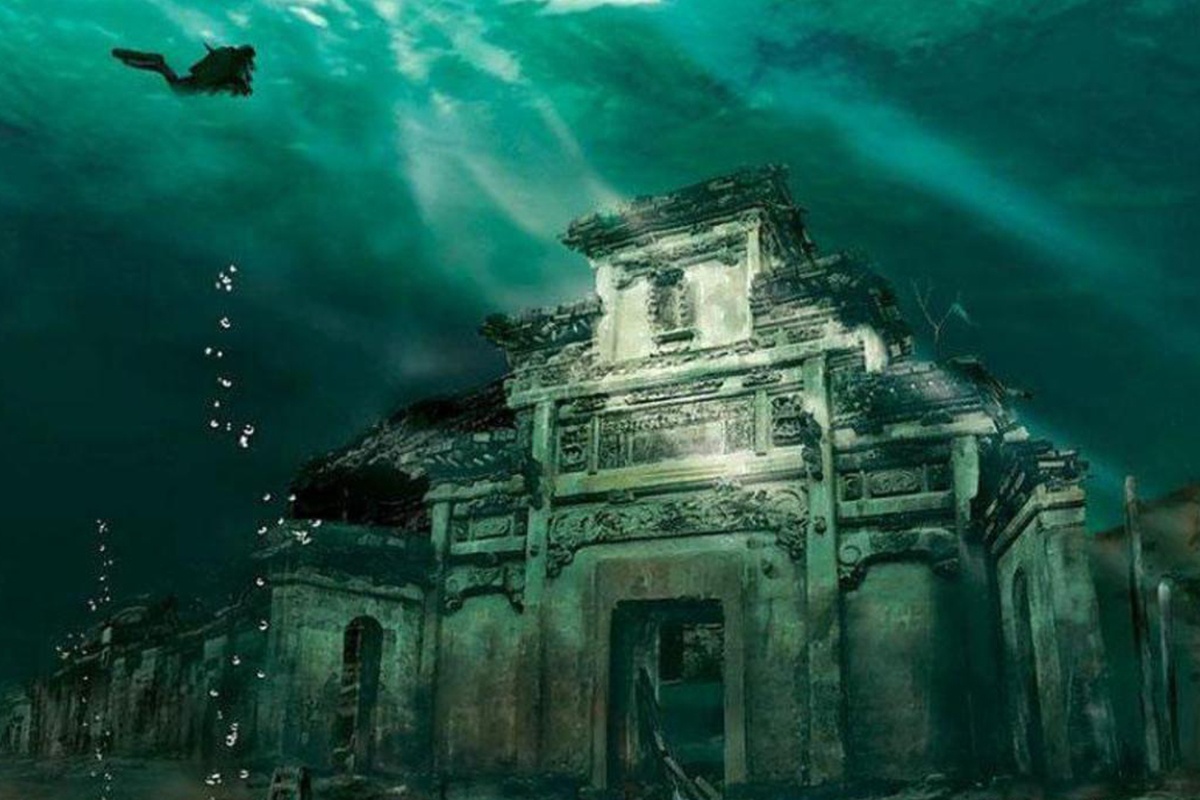 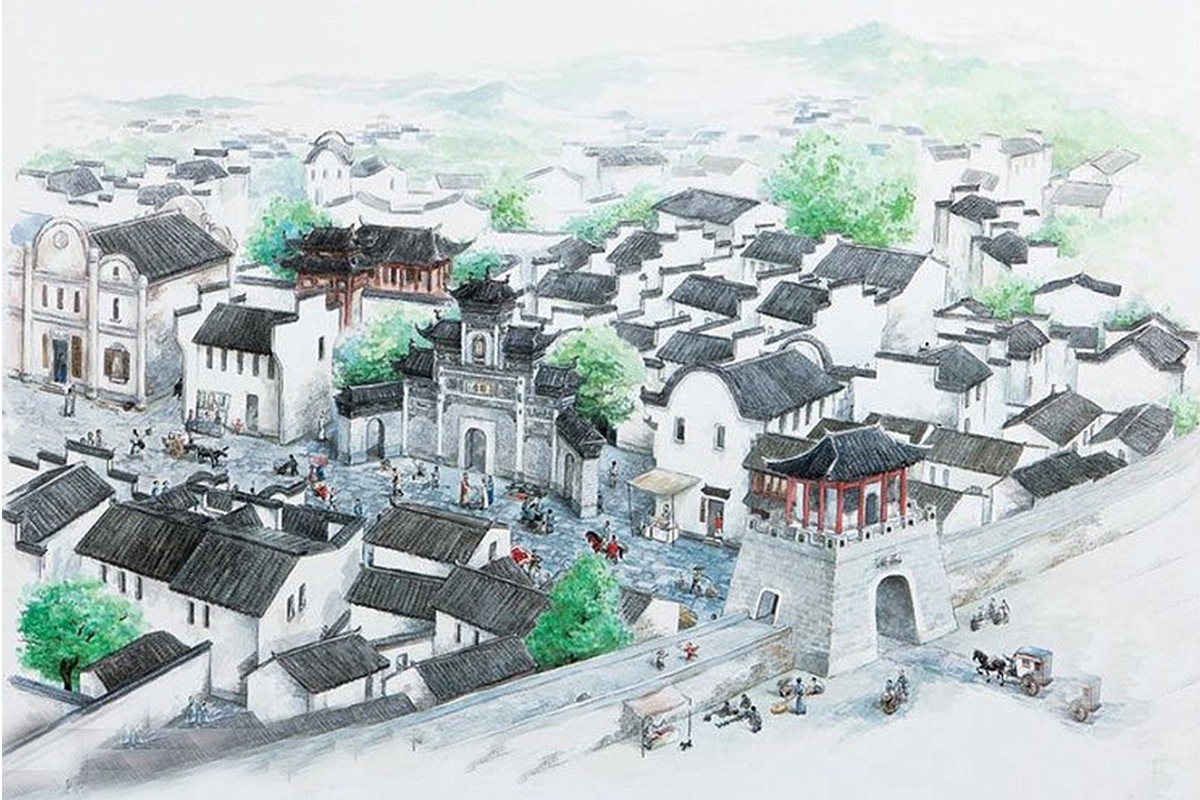 Story behind the Design

According to a Chinese legend, there once lived a turtle that was a thousand years old. Living inside the Dragon King’s Mighty Palace, the turtle was envious of its Master’s beautiful Pearl. Thus, one day while the King was absent, the turtle took off with the jewel. Outraged by the betrayal, the King chased after the turtle. However, from seeing the Furious King in close pursuit, the turtle dropped the Pearl in panic. Upon impact, the Pearl was buried deeply within the ground which triggered an enormous sound that attracted the attention of the Five Lions. Enchanted by its glow, the Five Lions fiercely fought over the Pearl. Seeing such chaos, the King froze the Five Lions in place, turning them into a mountain that later became known as the Wushi Mountain (五狮山). He then cast a spell on the Pearl, taking away its glow and turning it into a small village.

Over time, the village became known as Shi-Cheng (狮城), otherwise known as the Lion City. Now lying underneath the Qiandao Lake, Shi-Cheng remains frozen in time. Our proposal seeks to revitalize this once-bustling city by orchestrating an experience drawn from its mythology. We welcome our guests to come aboard the turtles and descend down into the depth of the lake in search of this glorious City. 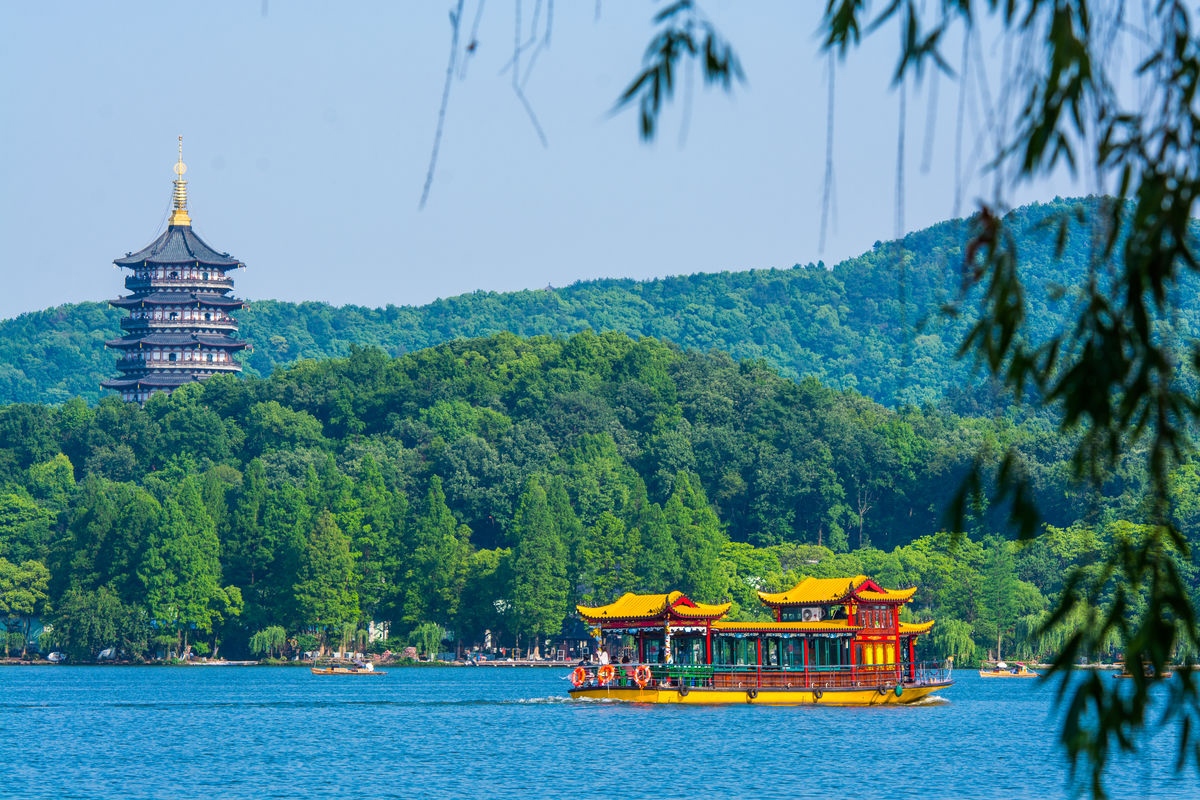 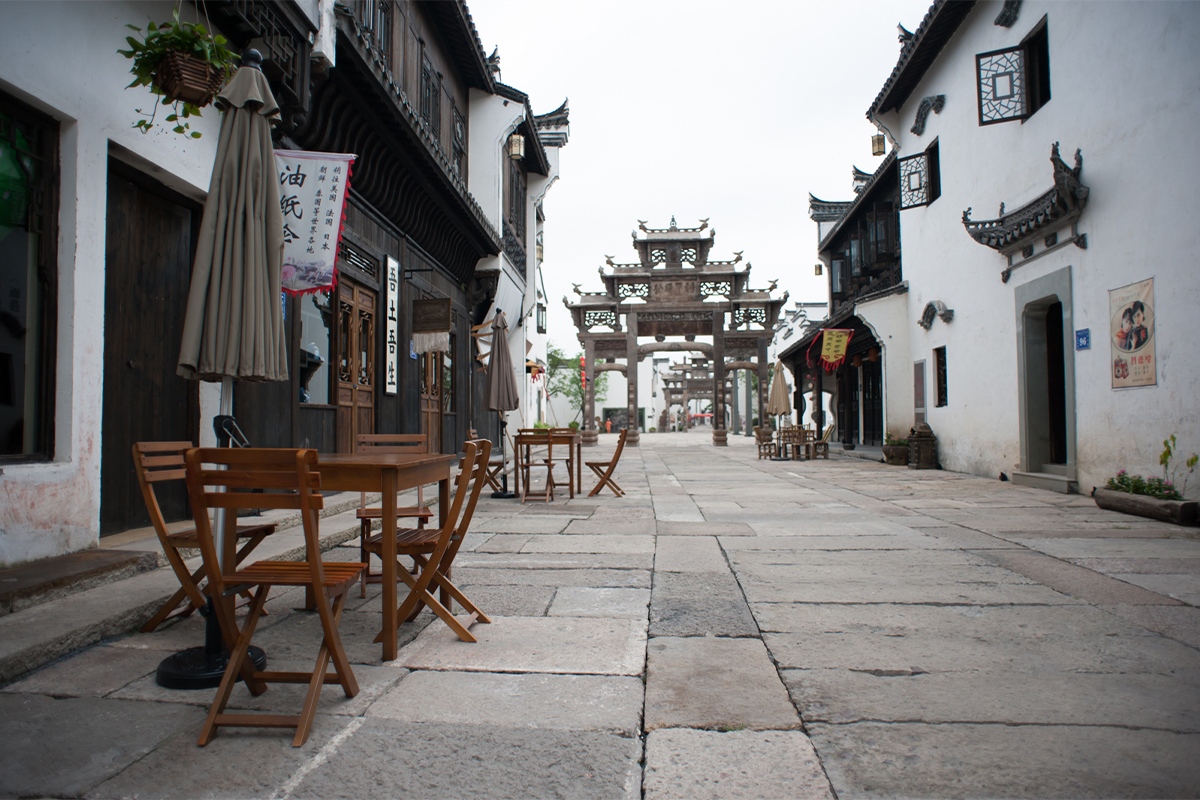 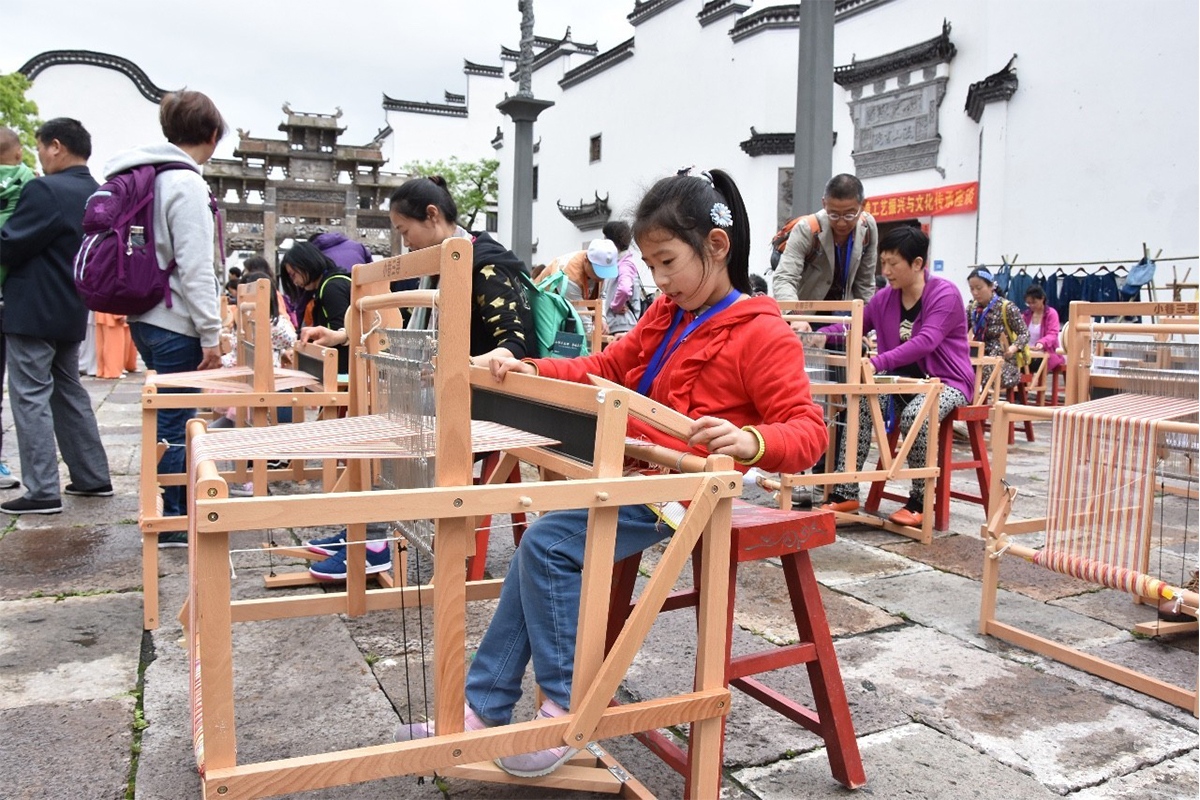 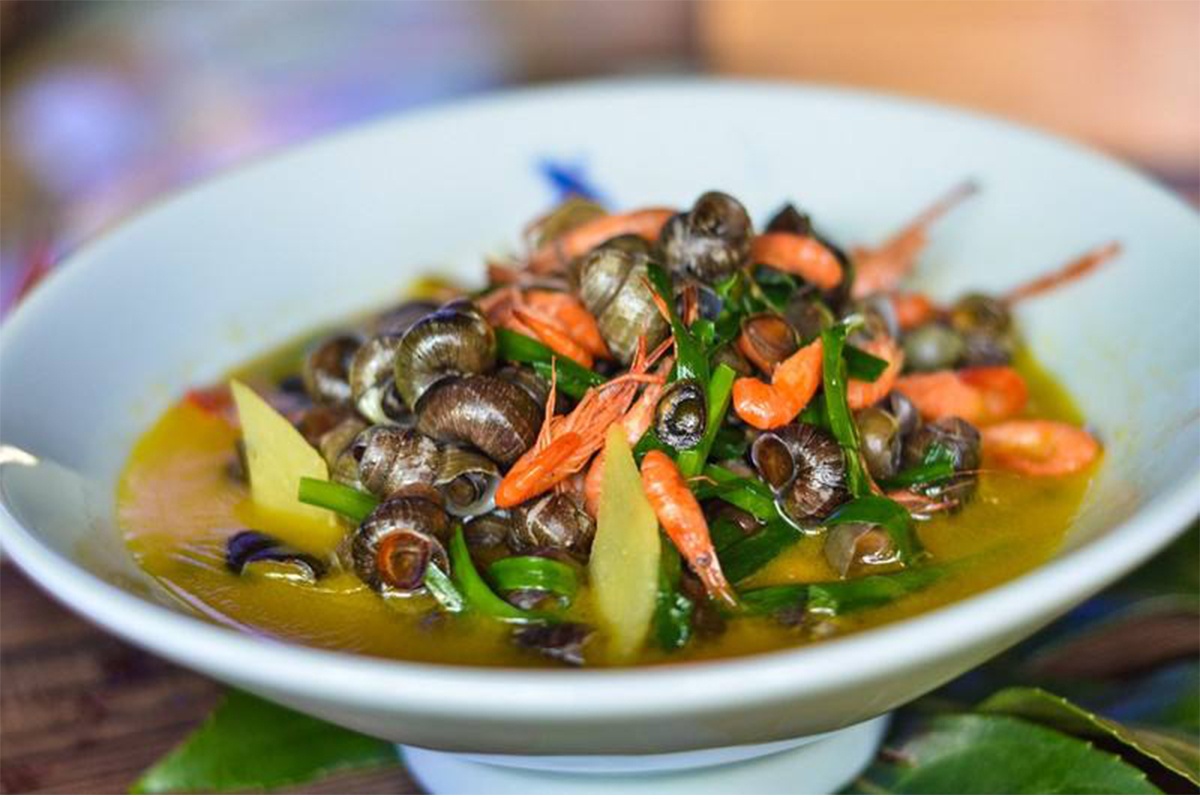 Our team designed an immersive vertical experience with a wide array of activities from above the water’s surface to 40 meters below Qian Dao lake. Guests begin the journey by departing on a traditional boat ride from inland to arrive at a Chinese pavilion where “Atlantis of the East” takes place. Here, guests will learn about the project development and take the elevator to go down to the underwater world. 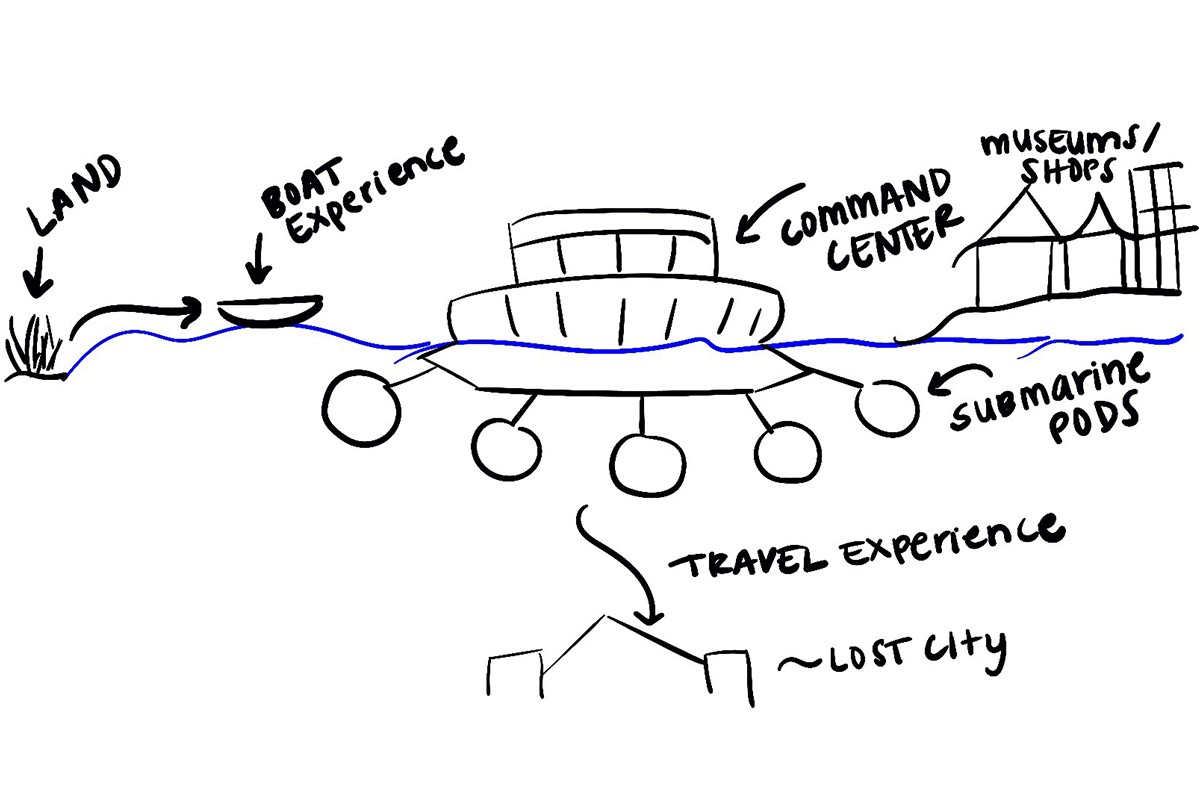 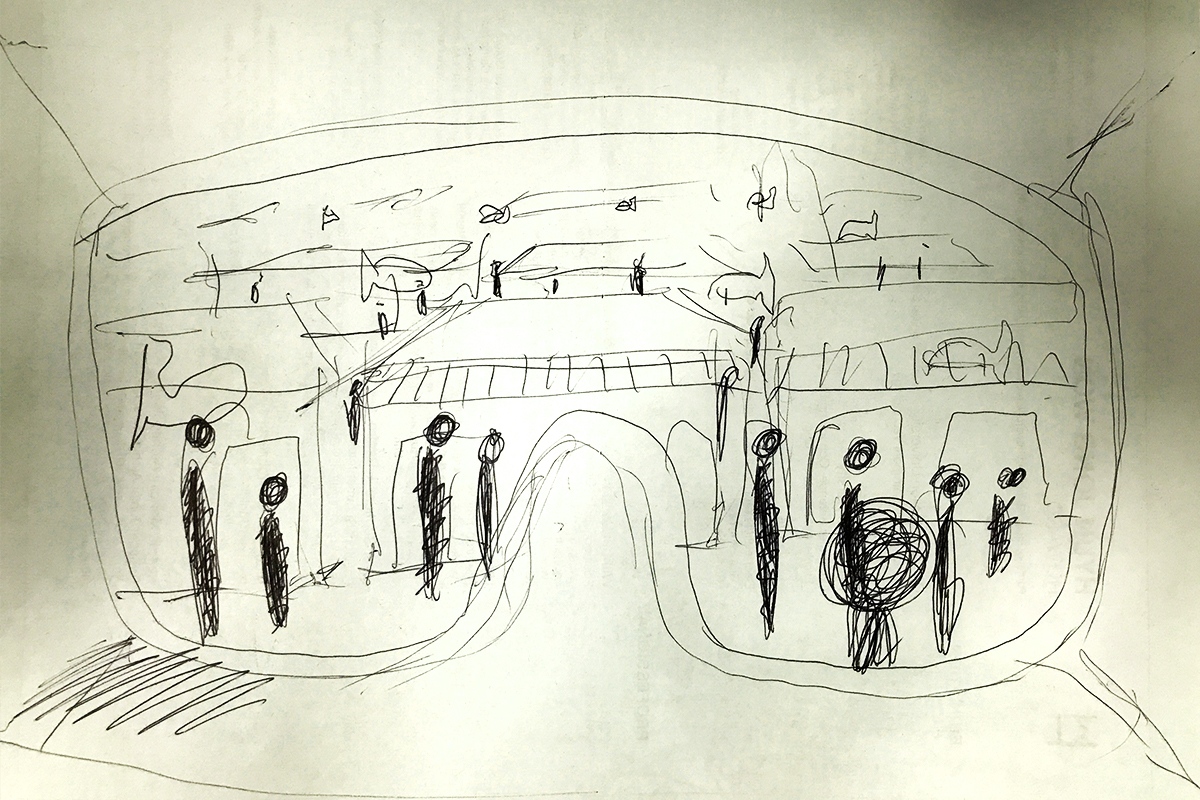 The inside of the elevator features a projection mapping that showcases the history of the Lion City throughout multiple eras and depicts how it was sunk by the development of the dam in the 1950s. Once the elevator lands, guests are welcomed to an underwater city that includes a variety of districts: market, hospitality, retail, entertainment, religious, and a submarine dock. Guests find themselves being able to traverse the districts to shop for traditional clothing like hanfus and dragon robes, taste savory seafood soups, and collect keepsake pearls as a timeless gift.

“Atlantis of the East” is a reconstruction of the original Lion City and is reminiscent of its beautiful architectural style. From the shores above to the sea below, guests are awe-struck from the gorgeous homage given to the authentic roots of the Lion City and are delighted for the years to come. 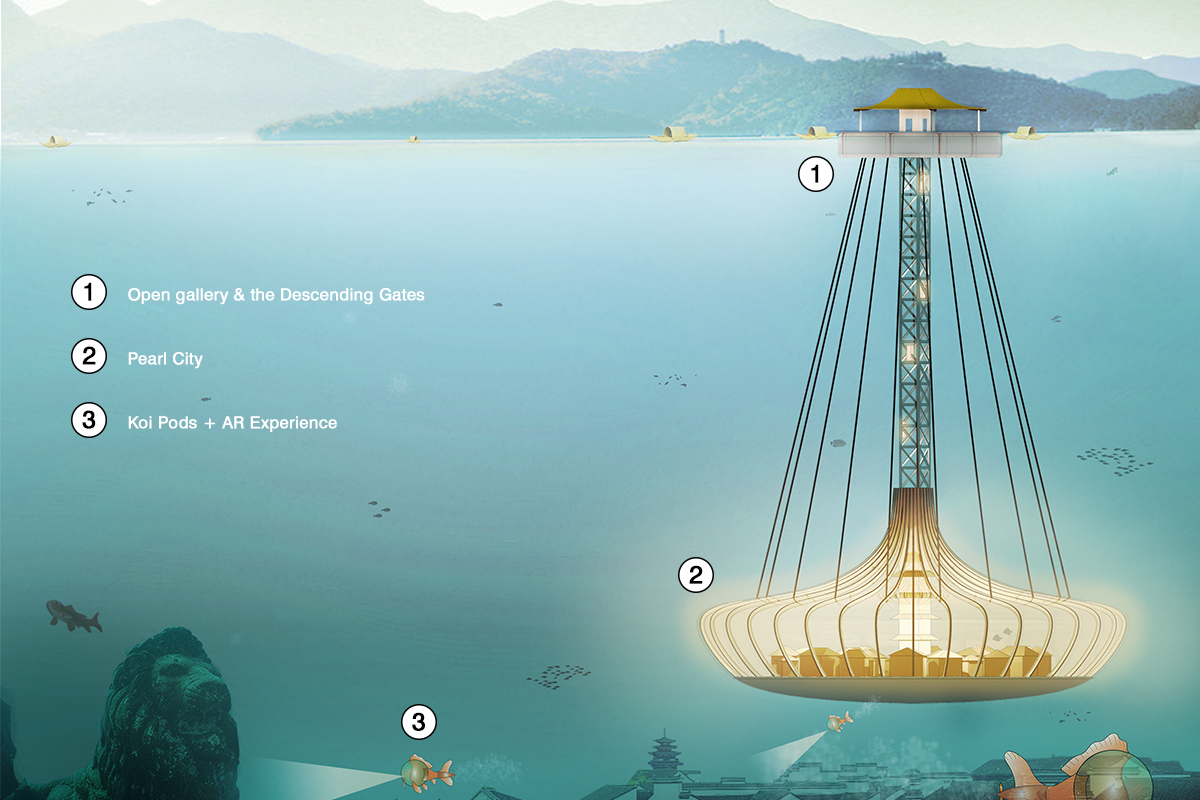 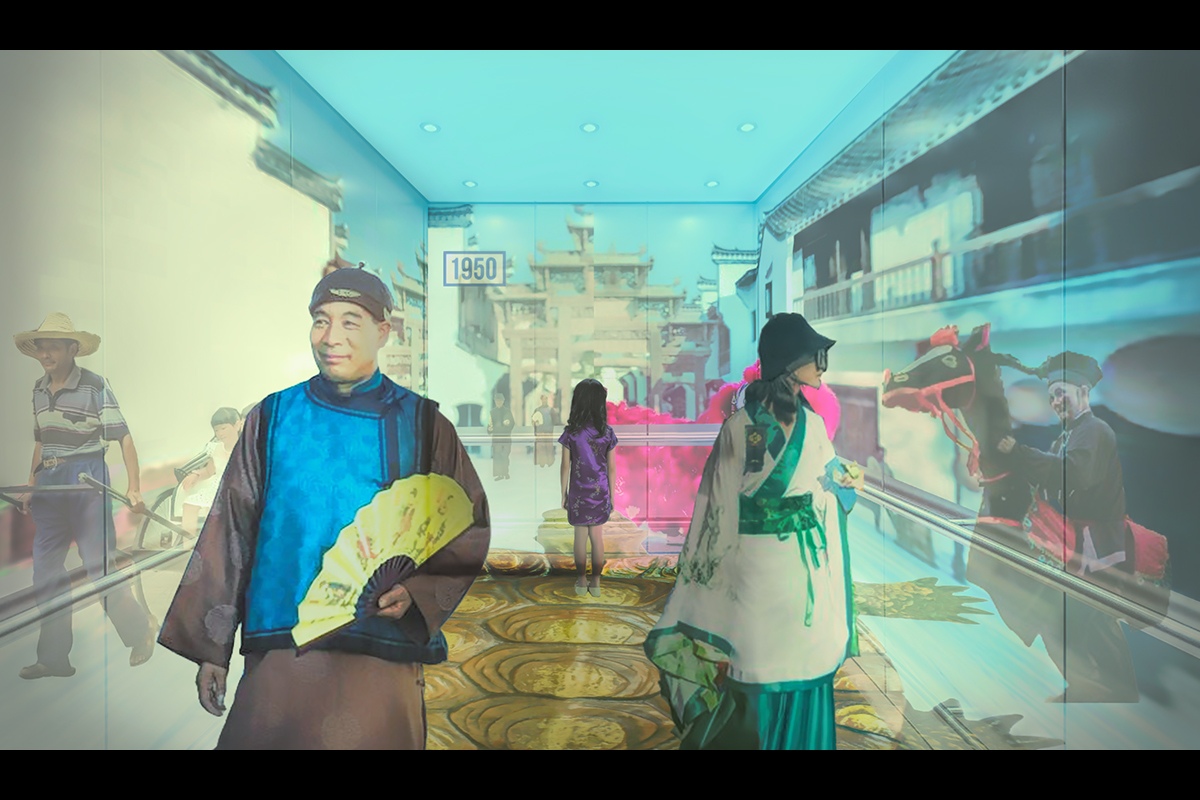 The ancient Lion City is known for having 5 unique city gates, which is different from the norm of 4. Inspired by the turtle from the legend, we designed 5 elevators that take guests down to the underwater world. Each elevator features floor-to-ceiling walls of projection mapping, rewinding the history of Shicheng through different eras. Being immersed in the narrative experience helps guests understand the rich historical and cultural context of Shicheng while limiting their fear of traveling 40 meters below the water surface.

Pearl City is the arrival destination of the turtle elevators. Featuring 5 charming districts from within, the city introduces guests to a diversity of events and activities, such as sightseeing, dining, theater performances and submarine scavenger hunt. 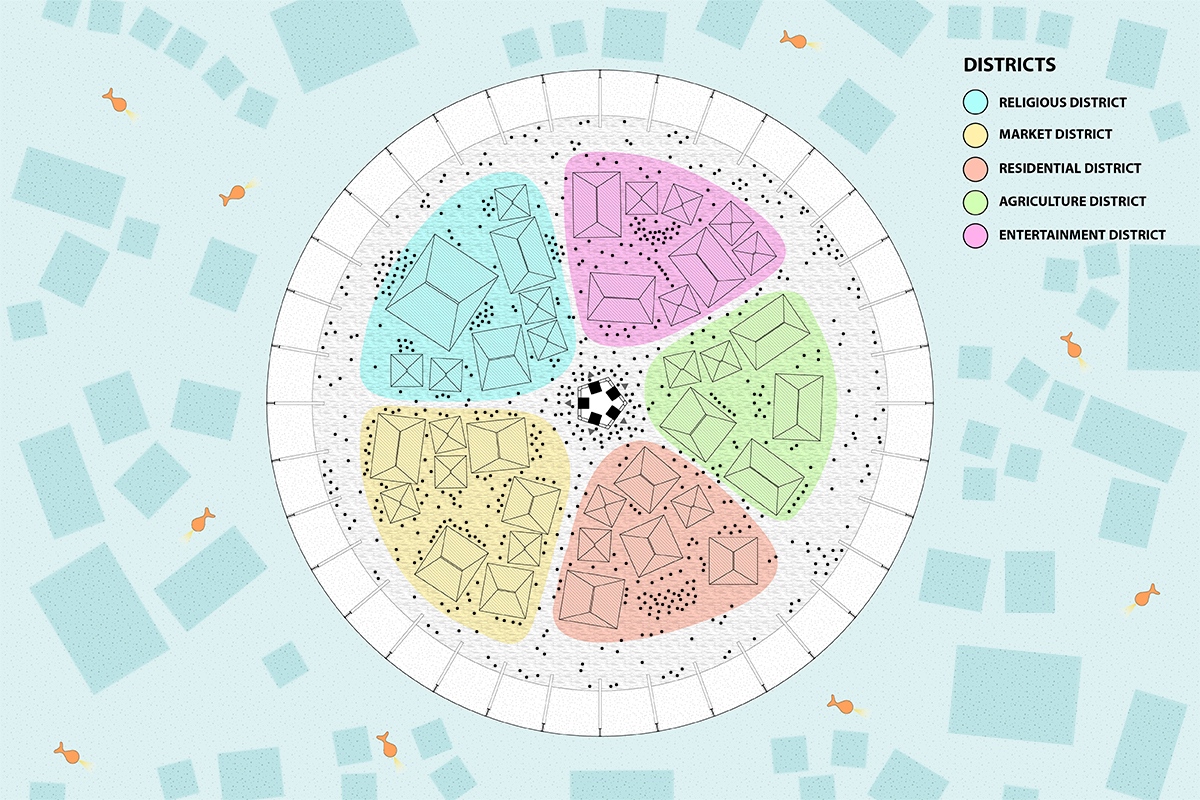 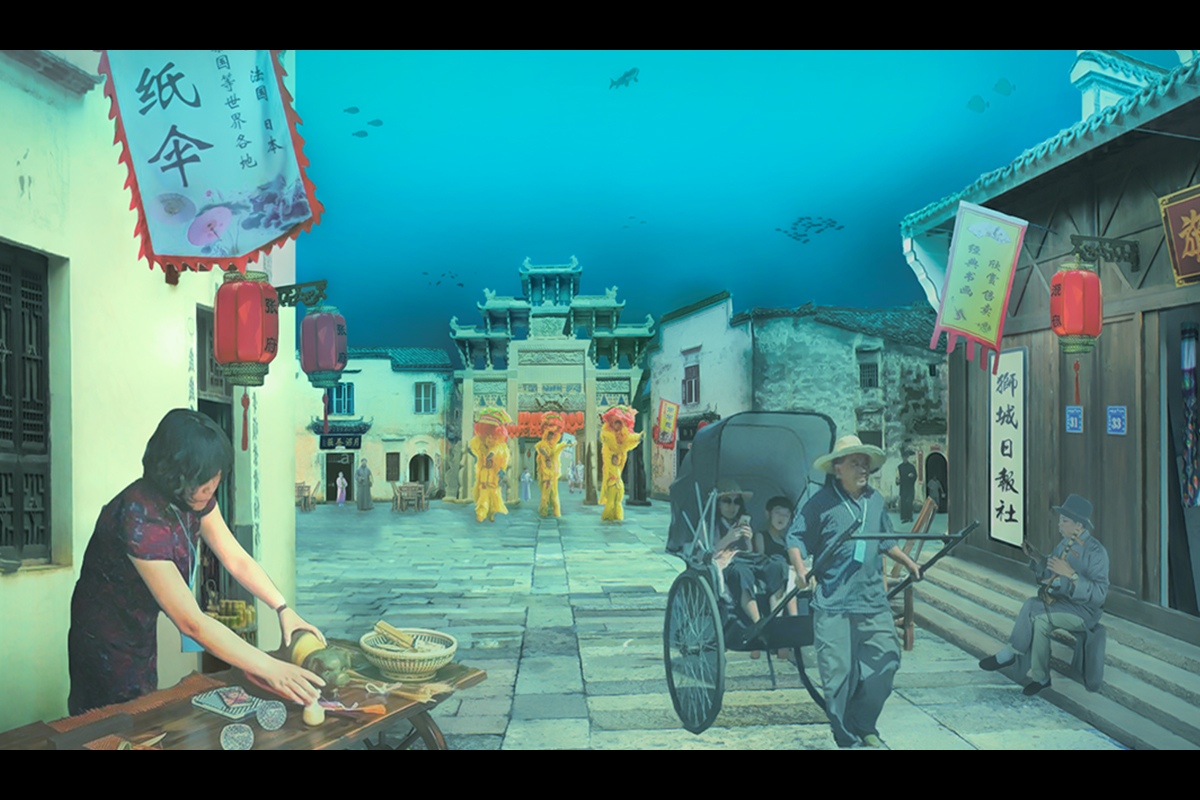 Throughout history, the koi fish has embodied a multitude of characteristics spanning from courage, good fortune, and longevity. In Chinese culture, a koi fish also represents a dragon. In “Atlantic of the East”, once guests reach the submarine dock district, they can board one of the koi pods that will take them down for a closer look at the Lion City. Riding in the koi pods provides an alluring and safe experience for guests.

Using the latest photogrammetry technology, the ancient ruins of Shicheng are protected via an invisible barrier. The positions of the submarines are tracked in real time to prevent collision with the ancient artifacts. 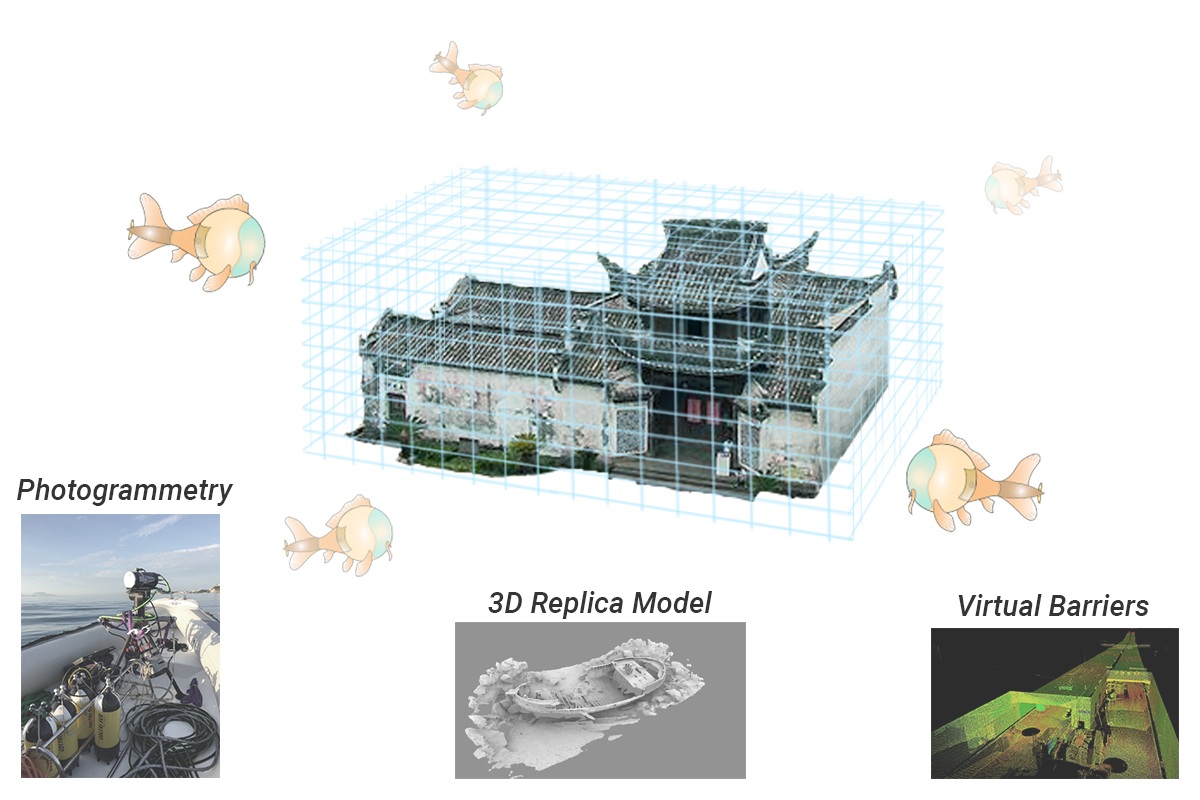 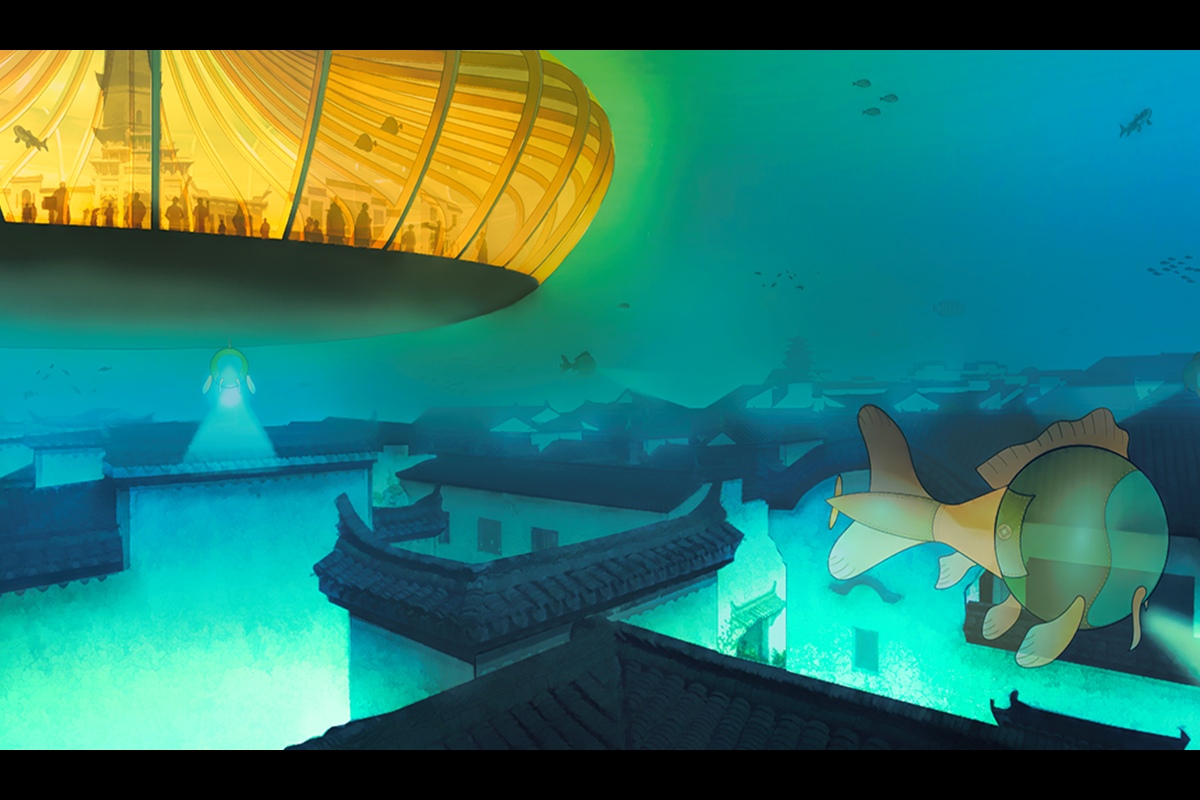 Guests are given an AR goggle to see the ancient Lion City being revived with animated citizens and events in the past. Guests collect the precious pearls through their AR goggles. 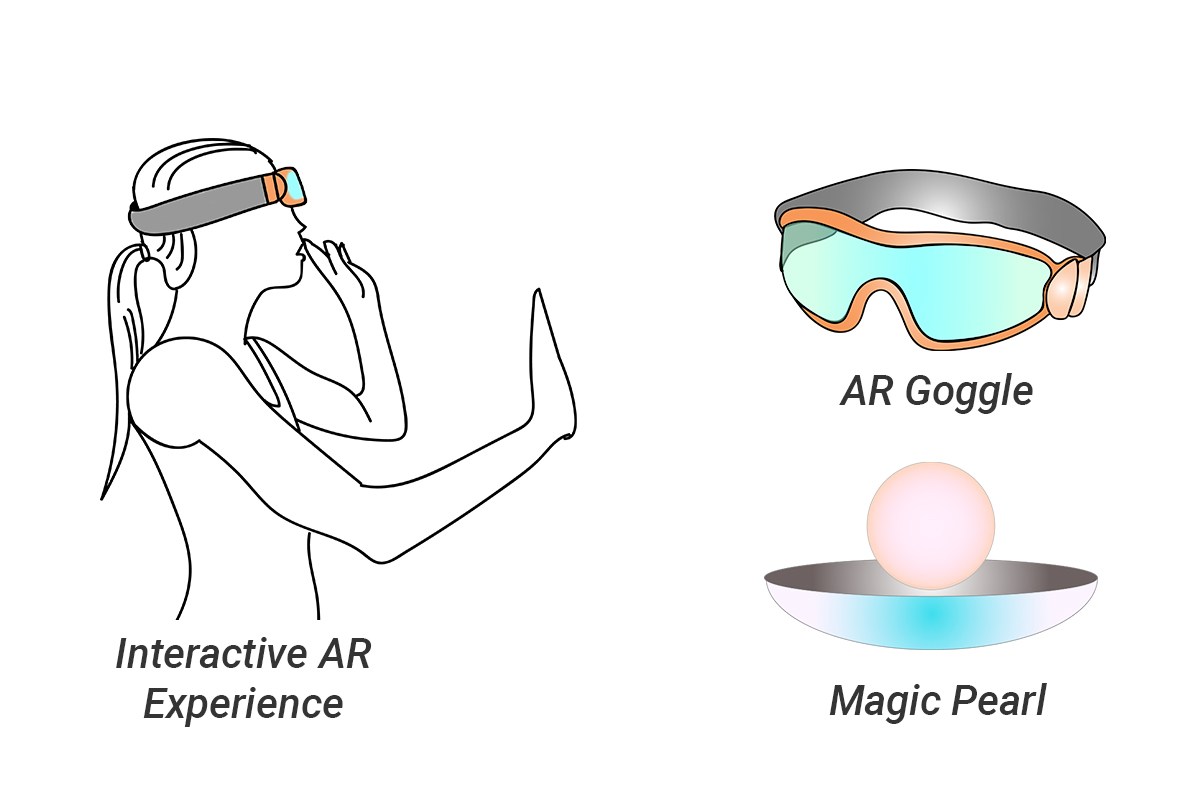 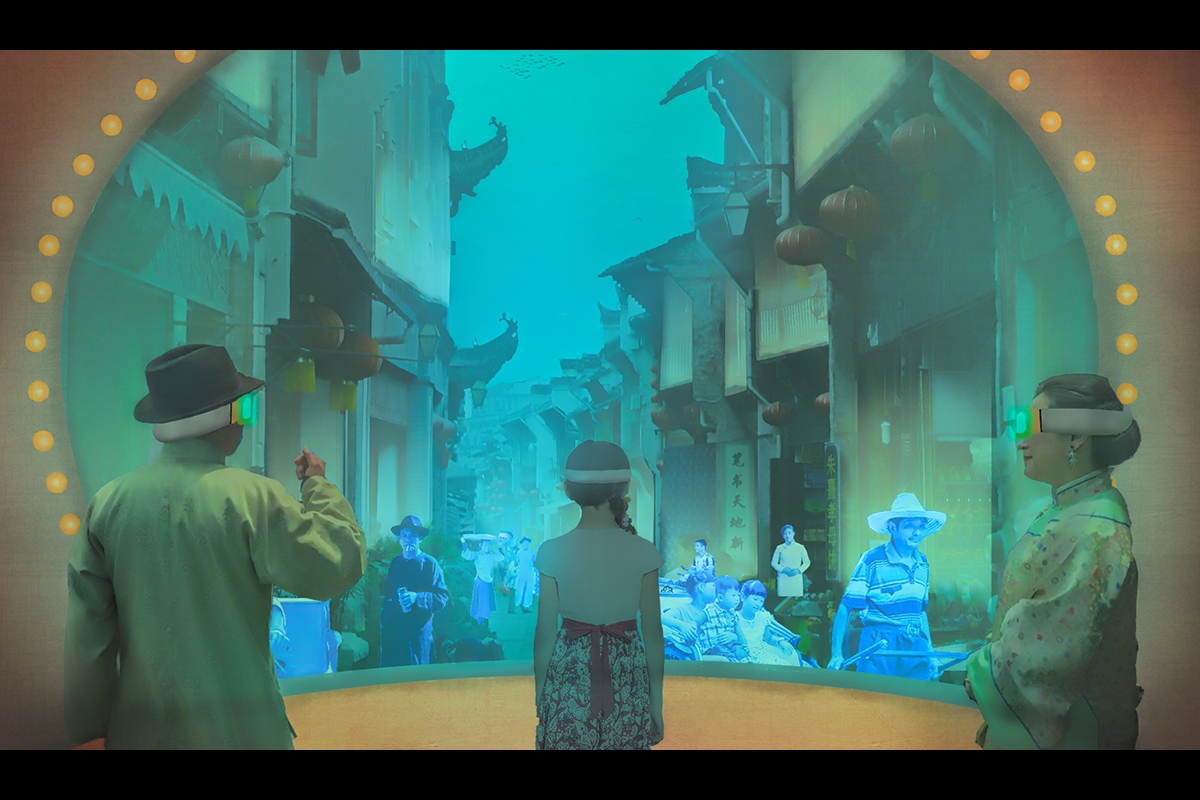