For my independent study course in Level Design at the Entertainment Technology Center, I designed a series of speculative combat levels for the third-person action adventure title Uncharted 4: Thief’s End by the developer Naughty Dog. Over the duration of a week, I have designed, prototyped, playtested, and iterated three combat levels that differ in environment setting, layout, player flow, and power dynamics.

For the first level, I was inspired by the intimate and yet spatially rich town squares I visited throughout Europe. Key characteristics that stood out to me were the colonnades and storefronts spilling out into the square, the historical statues that served as the focal point, and the street furniture that populated the space.

Before going to the drawing board, I started by first defining the design goals for the level. They were:

Inspired by the reference images I collected, I started sketching out a 2D paper map of the level. Here, the focus was on establishing the broad design strokes than detailed dimensions and metrics, which were later fleshed out into a gridded, 2D digital version using Adobe Illustrator.

When the player first enters the level, he/she is given an establishing view of the combat space and the enemies from the safety of an enclosed space. Here, the player is given a fairly large territory with three clear options from which to approach the enemies: 1) Through the center with low cover objects (No Man’s Land), 2) Through the colonnade on the left (Primary Flank), and 3) Through the store on the right (Secondary Flank). 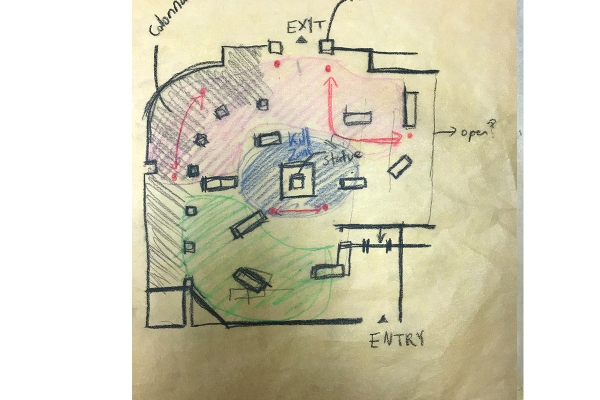 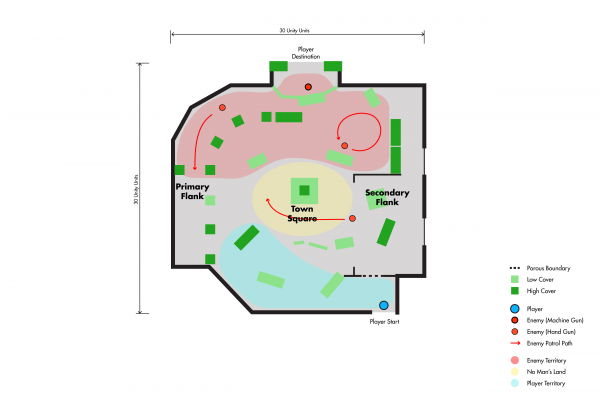 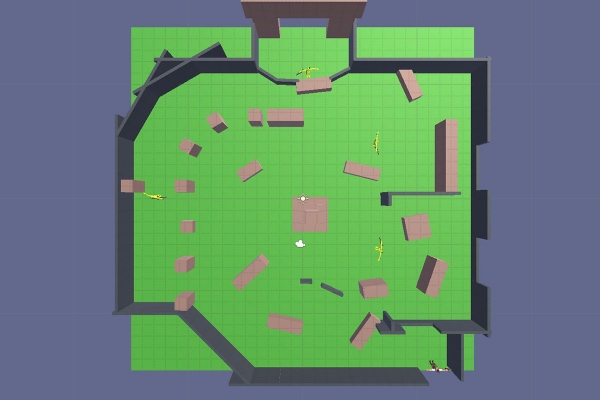 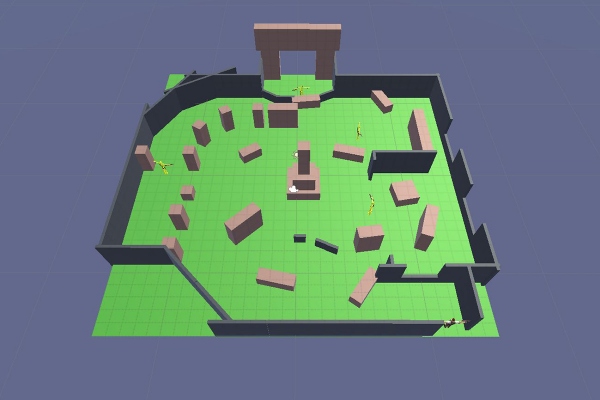 The No Man’s Land is anchored by a monument statue that acts as the wayfinding tool for the Player, which is especially important considering the frantic nature of combat. This area consists mostly of low-cover objects with the most exposure to enemy threats, which is intended to encourage the Player to use flanking routes instead. The colonnades on the right is designed as the most desirable option with only one patrolling enemy and a semi-enclosed, dimly-lit space that gives the Player a sense of safety. The store on the left is the second option, offering less security with more enemies and tight spaces with low visibility of the surrounding area.

I then translated the 2D map into a 3D environment in Unity. While blocking out the level, I focused on getting the scale to feel right with the gameplay requirements, such as sight lines, enemy patrol paths, and cover placements. Once I felt confident with the level layout, I added the third-person shooter template found on the asset store to have the level ready for playtesting. I went around and grabbed some friends to play the level, observing their behaviors during play and taking notes. I then applied these feedback to iterate on the level layout several times. 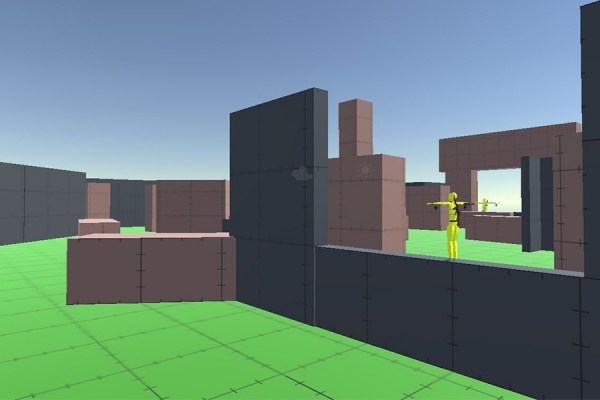 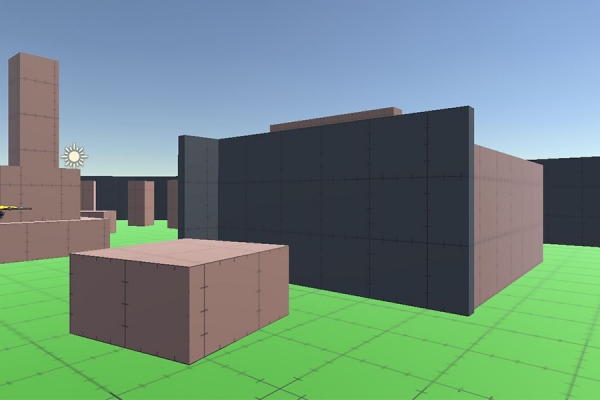 For the second level, I was initially inspired by the Yacht Level from the stealth game Hitman; mainly its clever use of different spaces and their potentials in creating interesting combat situations. For example, the claustrophobic yacht interiors make the player anxious with intense close-quarter combats, whereas the dockyards outside make the player feel insecure due to its openness.

Again, I started off by first defining the design goals. This time, I wanted to create a stand-off scenario where the player is encircled by a group of enemies and has to escape the current situation by fighting through the now high-alerted area. To achieve this effect, I defined the following goals: 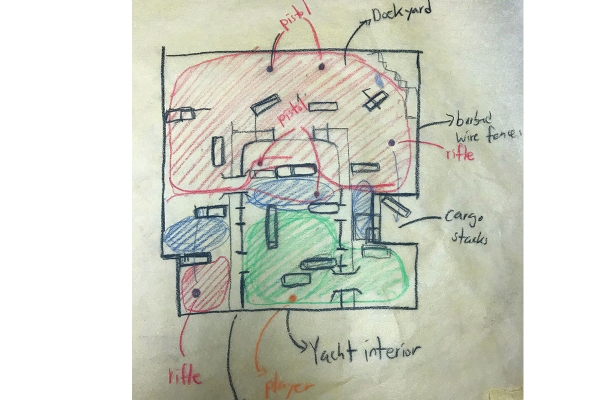 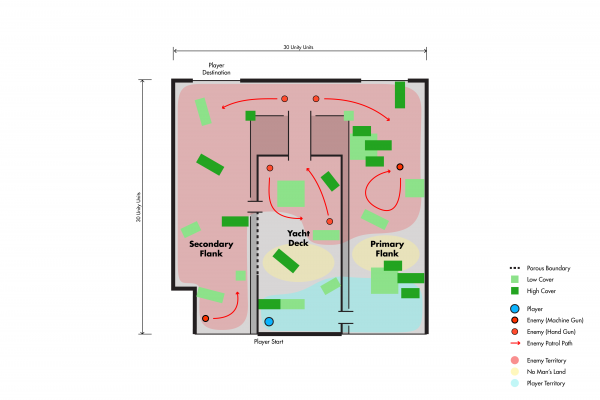 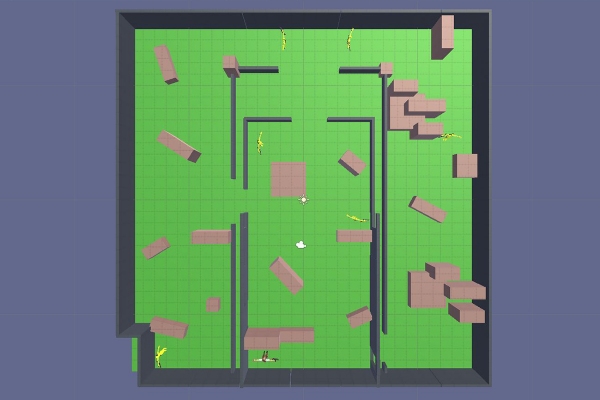 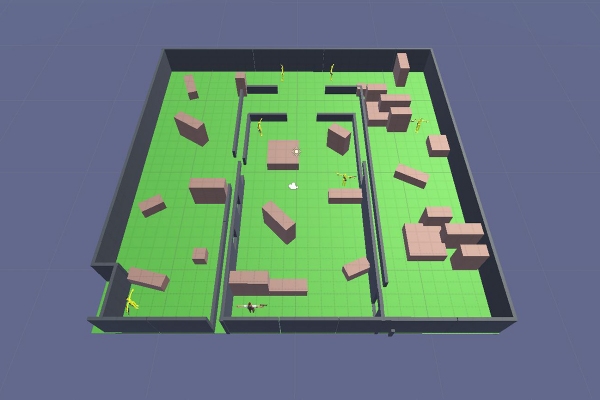 With this level, I wanted to play with the power dynamic between the Player and the enemies. A majority of the combat space was dominated by the enemies, significantly limiting the player’s territory and mobility. The enemies surrounded the player, putting him/her at a territorial disadvantage.

Spatially, I wanted to blur the boundary between the interior and the exterior by extending the combat area from inside the yacht out to the dockyard. The weaker enemies are posted inside the yacht and very close to the player, so that even a slight indiscreet move would result in an open shootout. However, the stronger enemies are posted along the flanking routes in the dockyard outside, unseen by the player from inside the boat. This is to subvert the player’s assumption that the flanks “must be safe.” 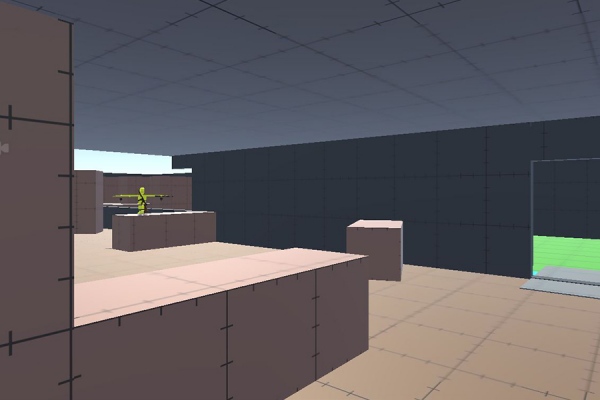 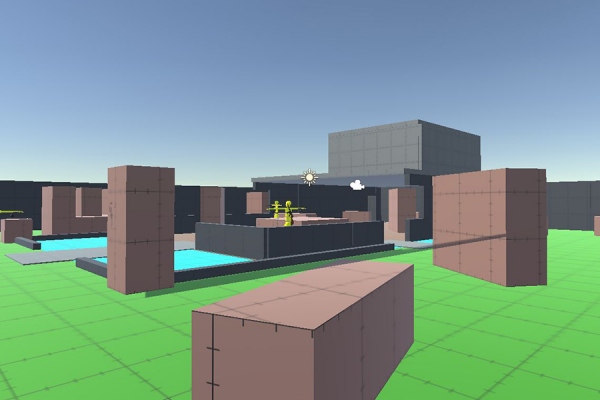 Throughout my architecture education, the atrium has been one of my favorite spaces inside a building. It had this dynamic experience of moving through a tight, single-story corridor that opens up into a gigantic void at the heart of the building. For the third and the last level of the series, I wanted to design a large combat area that was entirely indoors, so I chose to base it inside a hotel where there’s a good mix of private dwelling and public gathering spaces.

Given the target size of the last level, I had more opportunity to play with exploration, stealth gameplay, and gameplay pacing in general. I established the following design goals:

The atrium is the central architectural element of the level, an empty void that provides strategic vantage points and acts as the wayfinding compass that can be seen from within the perimeter hotel rooms through doorways and windows. 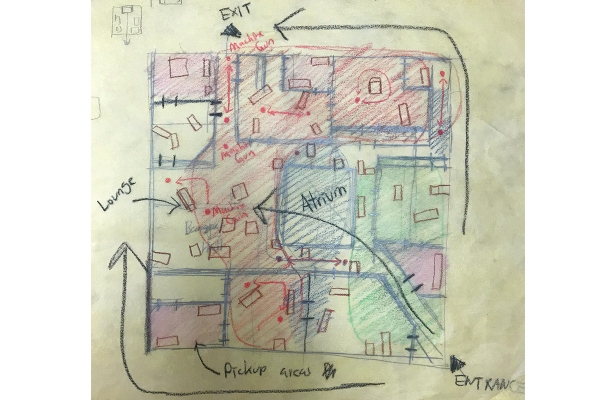 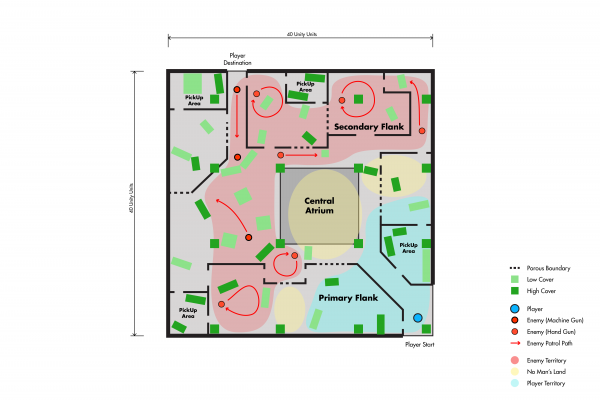 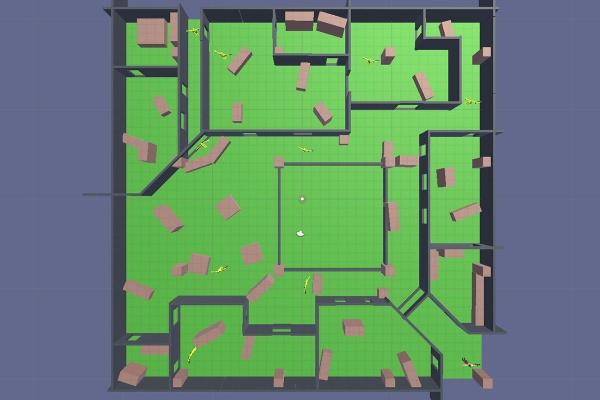 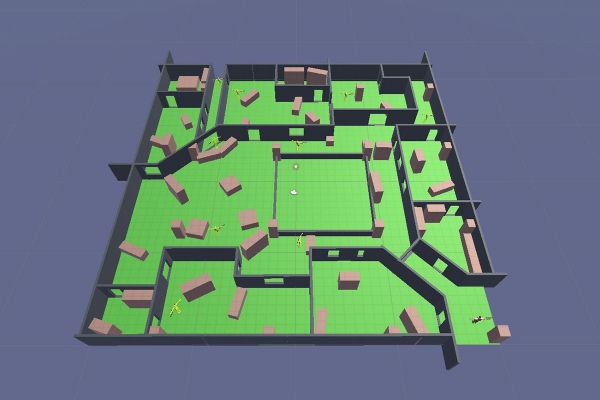 At the start, the player is provided with a clear, unobstructed view of the atrium space, which establishes a mental image of the general level layout (obstacles), enemy positions (threats), and the barricaded exit (goal) placed diagonally across the atrium. The player has access to the flanking routes right from the start, which lead to generous “buffer spaces” that the player can explore and stock up on ammo and other resources.

With this level, I wanted to put more emphasis on stealth gameplay and enemy takedowns, so the majority of the enemies is posted in isolated rooms and corridors that the player can easily approach. However, given the visual connections between the rooms, the player is forced to be more discreet and time the takedowns accordingly. In addition, more attention was given to each area to avoid dead-ends by offering the player at least two routes to displace. This way, the player can rotate around at any point in the map for both stealth and gunfights.

As the player progresses through the level, the gameplay pacing increases in intensity. The player is given enough room to initially scan the area and explore without being detected. Then, as the player treads into the enemy territory, he/she confronts each enemy one by one. As the player nears the exit, where there is a high density of strong enemies, the stealth tactic becomes very challenging and will likely result in an open shootout. 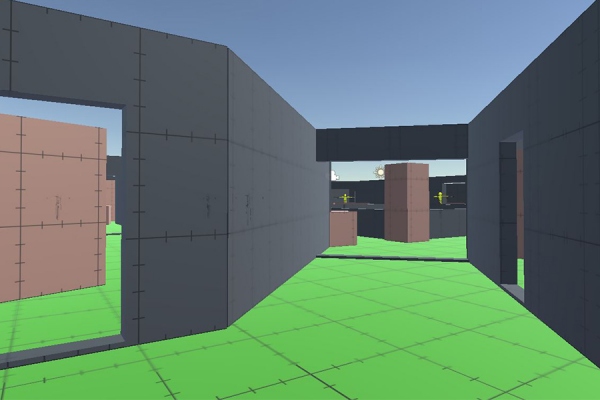 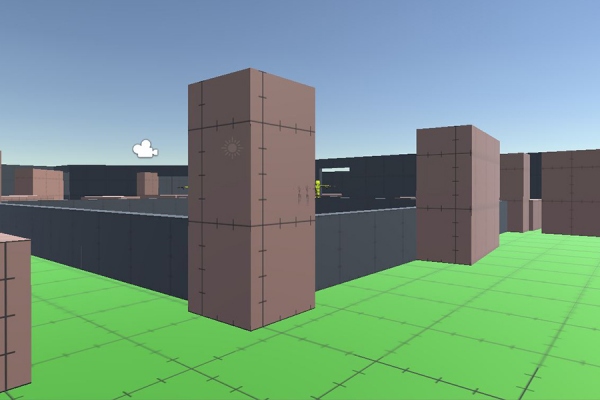 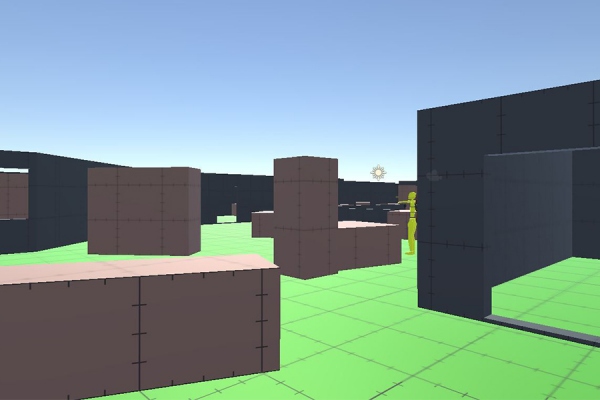 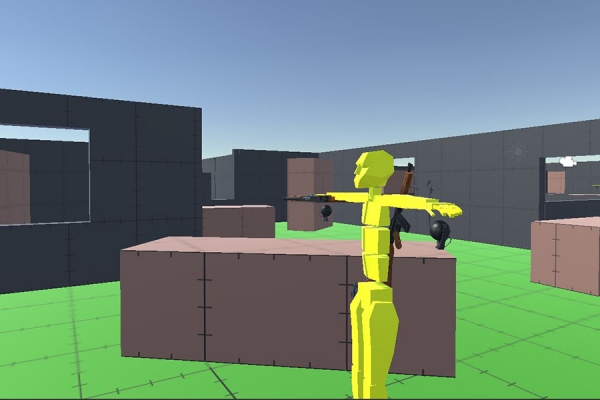