A Virtual Reality (VR) interactive narrative experience, developed for the HTC Vive platform. The guest first embodies the character of a prisoner, who is guided by his fellow inmate on an escape attempt. At the end of the first attempt, the guest swaps characters with the inmate, and relives the experience firsthand. At the end of the second attempt, the guest is faced with a dilemma: whether to escape the prison at the expense of the other or save him from falling to his death. 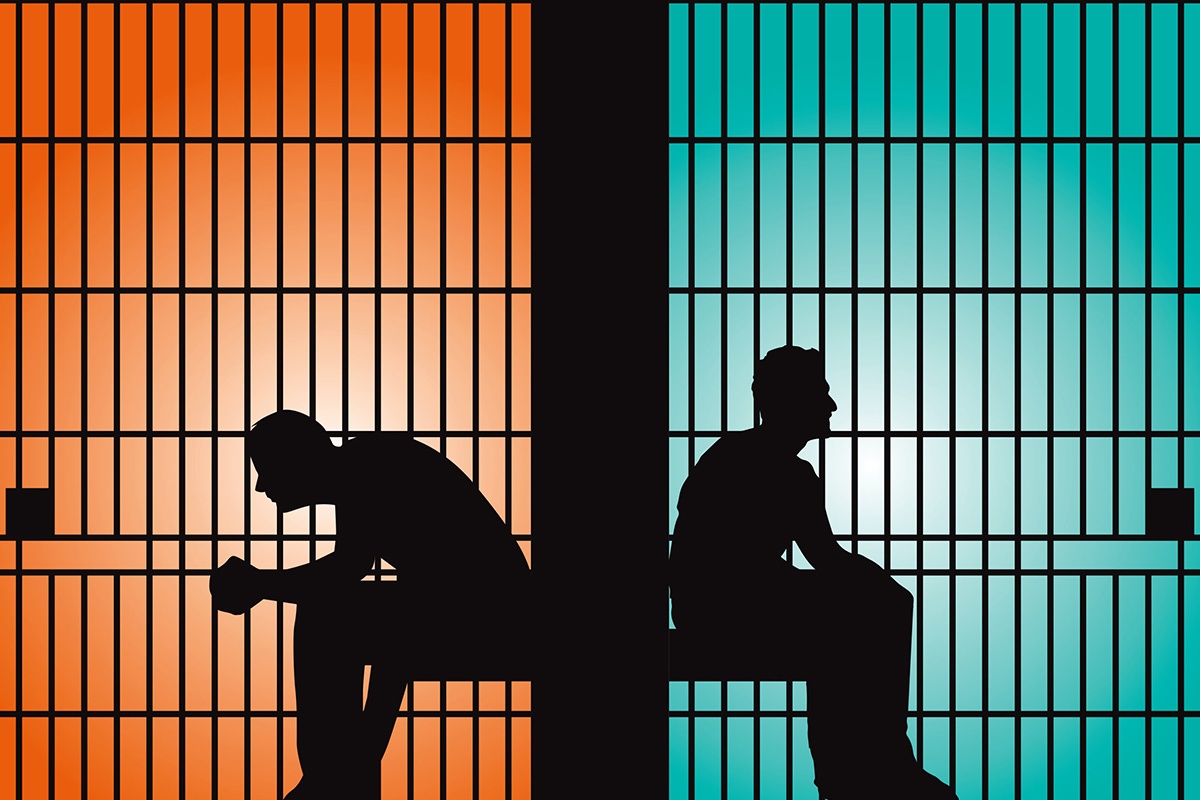 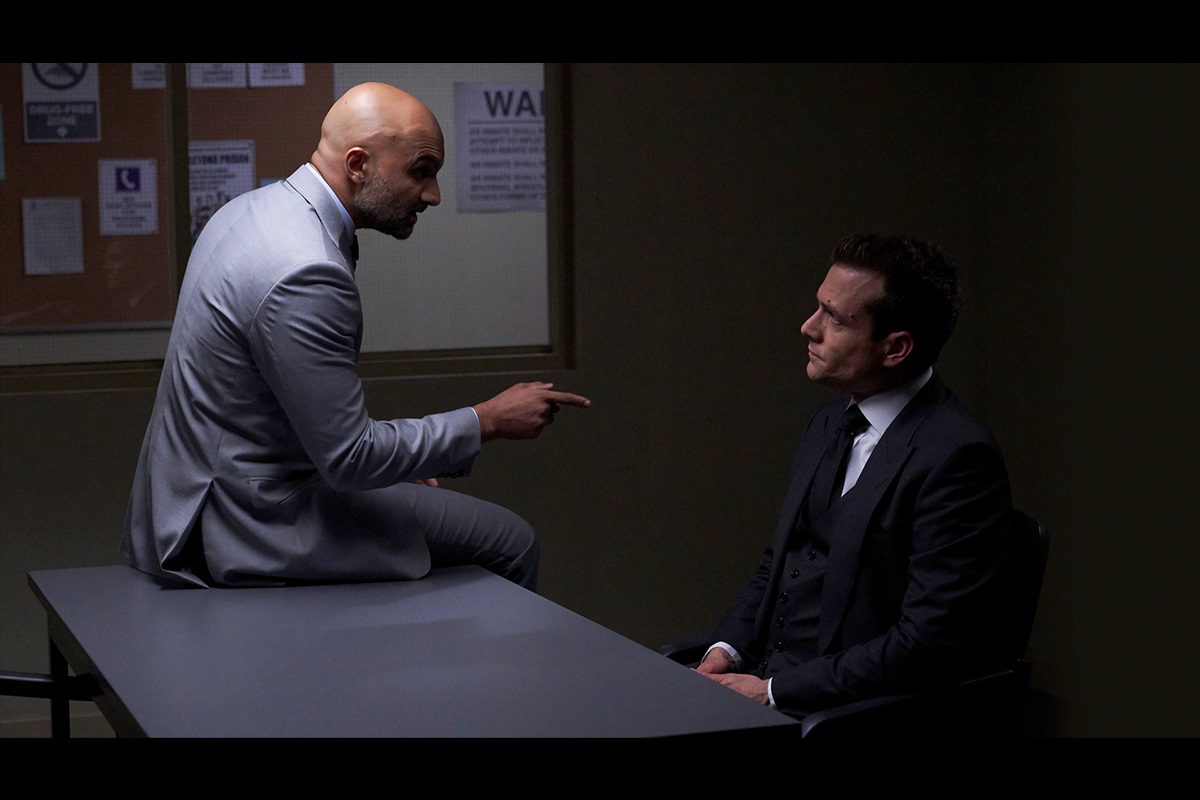 To fully explore the dual perspectives that are central to the prisoner’s dilemma, we sought to put the guest into both inmates’ shoes through role switching and hence have them relive the experience from a different perspective.

On the first playthrough of the experience, the guest embodies a young convict following behind his older inmate in an attempted prison escape. The virtual companion leads the guest through the prison in a professional manner, stealthily avoiding guards and climbing the service pipes up towards the roof. Once on the roof, the old man successfully manages to cross the outer wall, and freedom seems to be within reach. However, as the guards near the guest who is still on the prison roof at this point, the old man is faced with a dilemma – whether to abandon the guest and save himself, or to save the guest and risk being caught altogether. He decides to save the guest, but as he attempts to get the guest across the wall the guards burst out onto the roof, resulting in a mission failure. It is at this point the guest’s vision is faded out and flashed back into the cell.

On the second playthrough, the guest no longer controls the young prisoner but embodies the older inmate instead. The guest is now put in a situation to lead the young inmate in the prison escape, who is much clumsier in his actions. The young body unintentionally alerts the guards, who are now rushing towards them every second. In contrary to the first playthrough, the stakes are raised and the pressure higher. After the guest safely crosses the outer wall, the young inmate following behind trips and grapples for his life as he hangs onto the edge of the wood plank. Here, the guest is faced with a dilemma – a similar one to that of the old man in the first playthrough – and is given three choices: 1) leave the young boy to his death and save him/herself, 2) save the young boy and risk being caught, or 3) idle long enough to be caught and have the young boy fall to his death. Based on the guest’s decision, the experience ends with one of three possible endings. 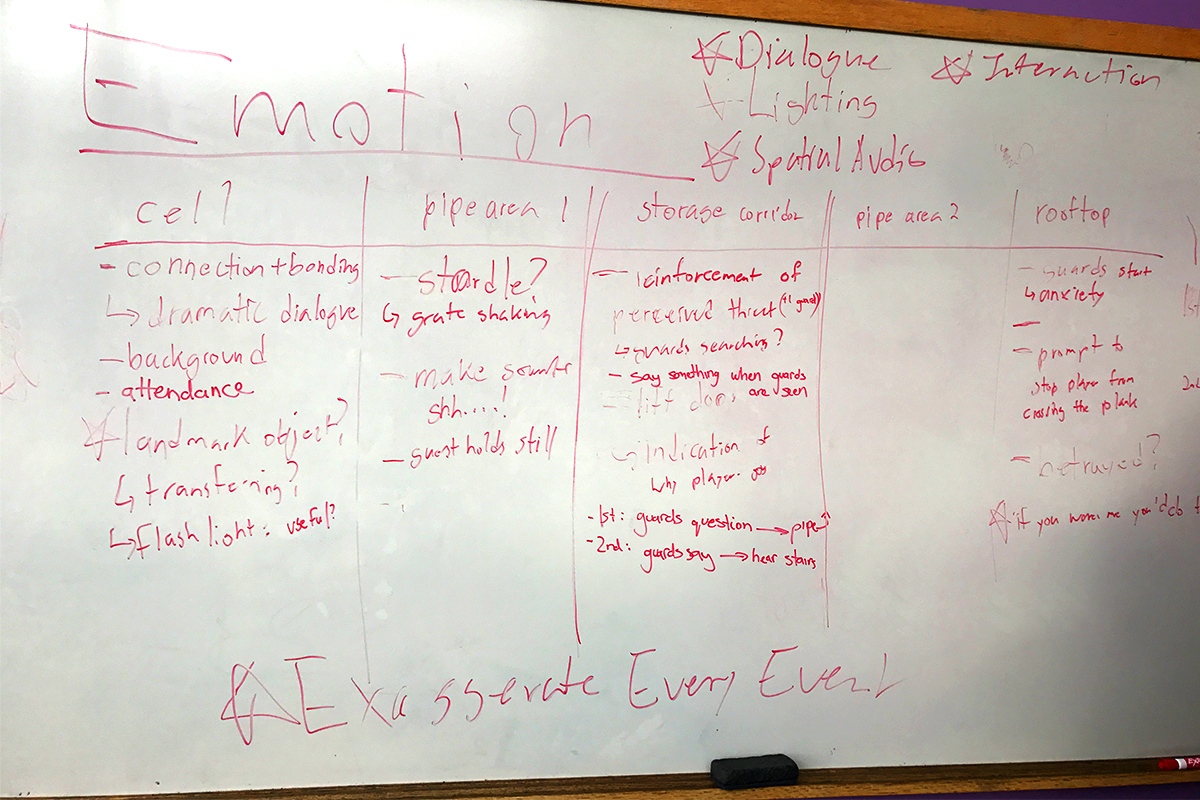 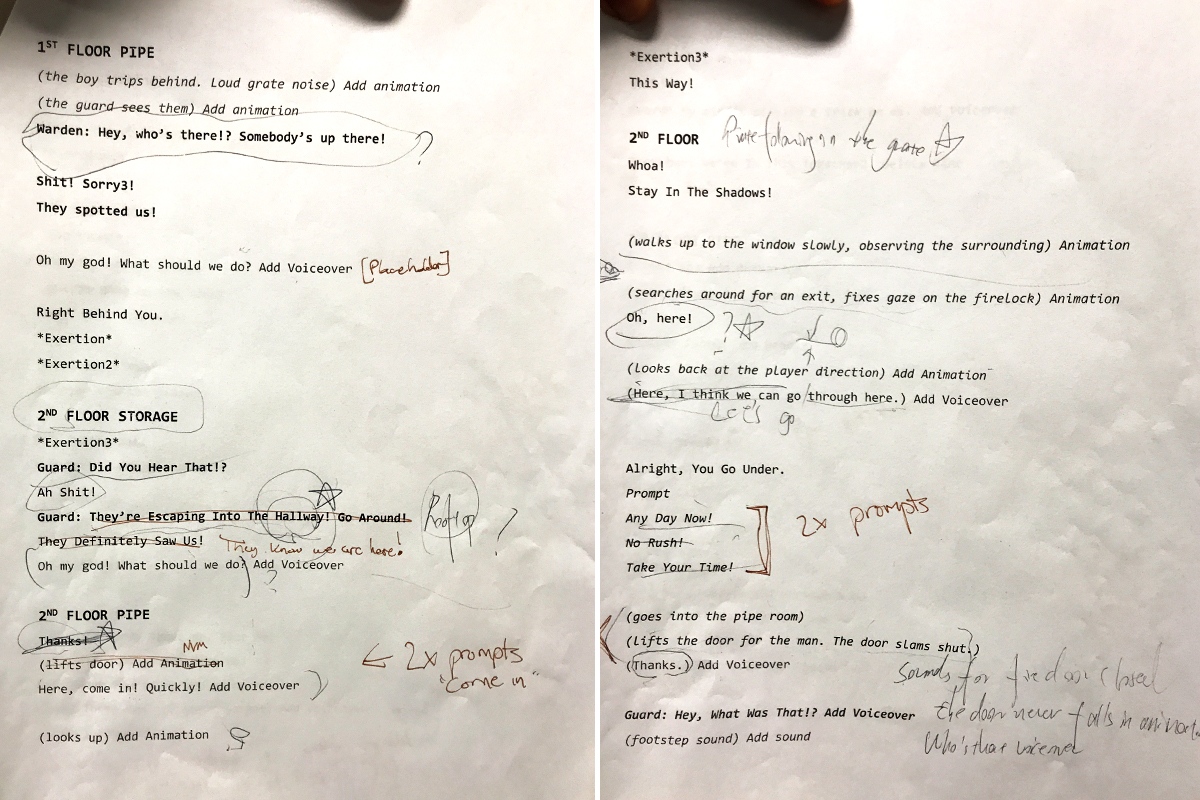 Most of the interactive experience takes place in three distinct primary scenes within the jail: the cell (1st floor), the storage (2nd floor), and the rooftop (3rd floor). These scenes are vertically connected via transitional service spaces in which the players traverse the jail by climbing. The levels are specifically designed to leverage the locomotion affordance of room scale VR, constantly re-orienting the players within the limited play zone while placing them in drastically different spatial interiors, hence giving an illusion of walking through a world much larger than the physical space in reality.

The starting scene takes place in an intimate jail cell, adjoined to a large interior atrium containing the other jail cells. Bordered by a metal bar wall, the two spaces are visually connected, allowing the player to peak into the space beyond. Behind the jail cell, a tight pipe room is soon revealed, which is vertically connected with a guarded corridor below and the storage corridor above.

=achieving a level of realism: presenting a believable world, but also one that acknowledges the player’s presence.

=acknowledging the physicality of the virtual environment (objects such as furnitures and pipes, and spatial boundaries such as walls, doors)

The Old Man is initially positioned directly opposite the room from the player for a face-to-face conversation, in which he establishes himself as a leader. The guard comes by for an attendance check on the inmates, at which point he cues the player to hold up his/her hand. When the , the Old Man walks over to a nearby poster on a wall and tears it down, revealing a dug-out hole to the service pipe area. The player is then led 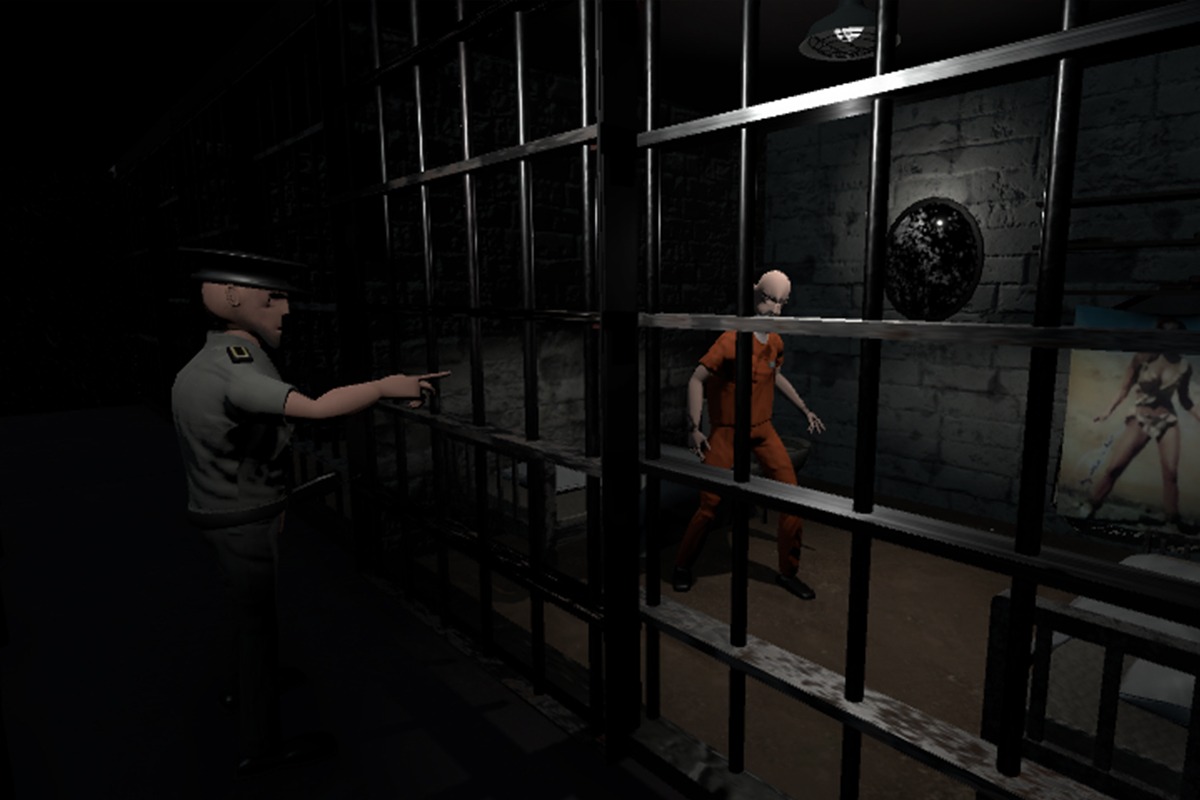 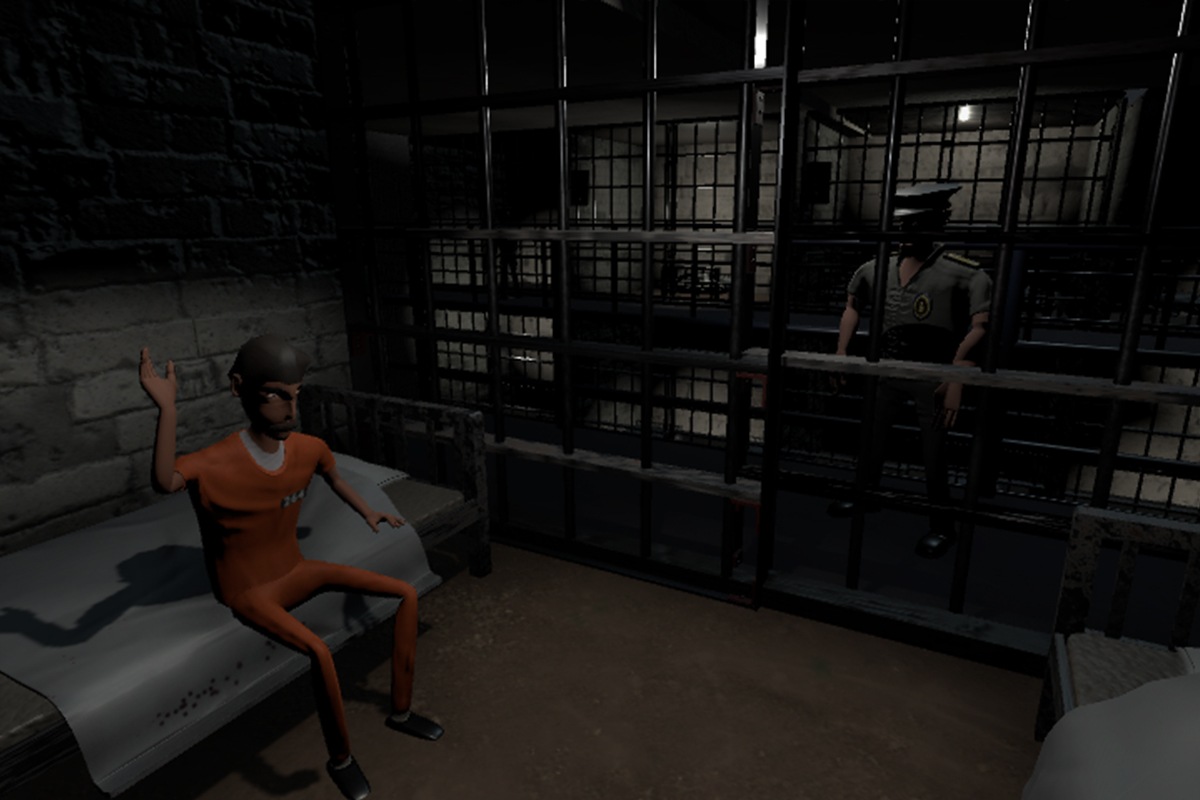 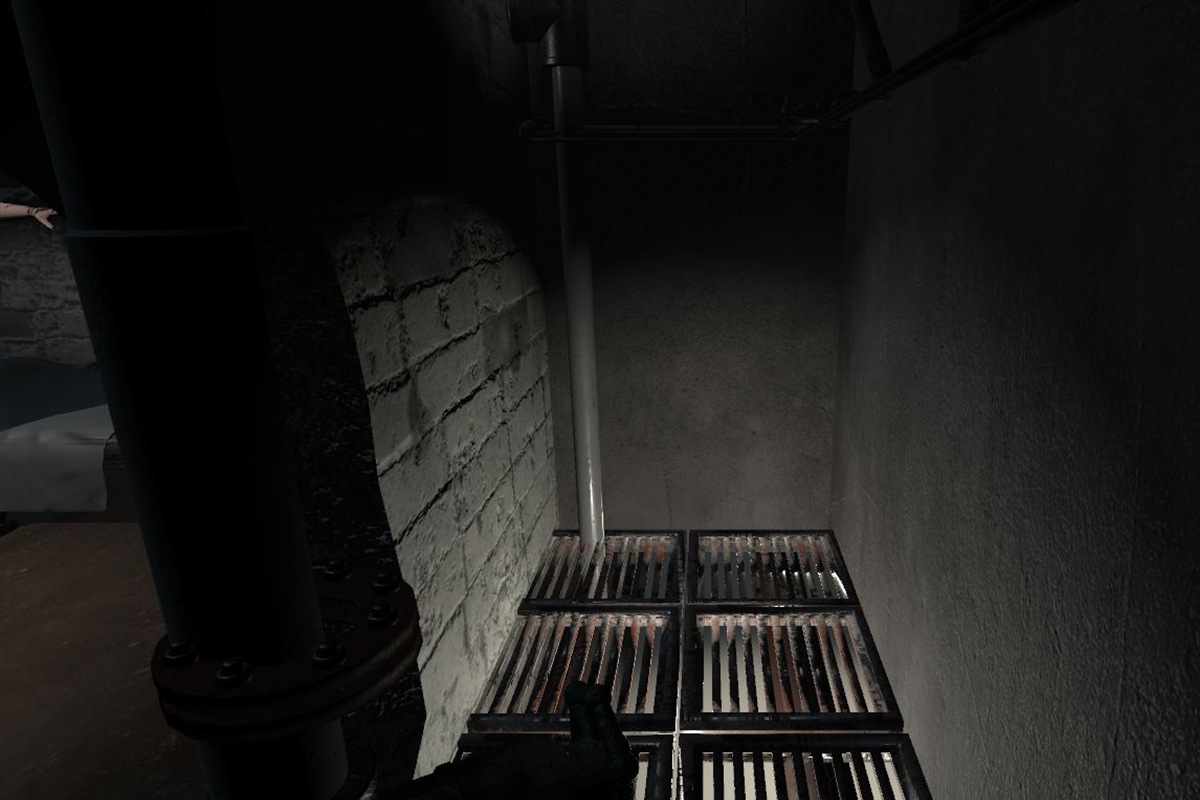 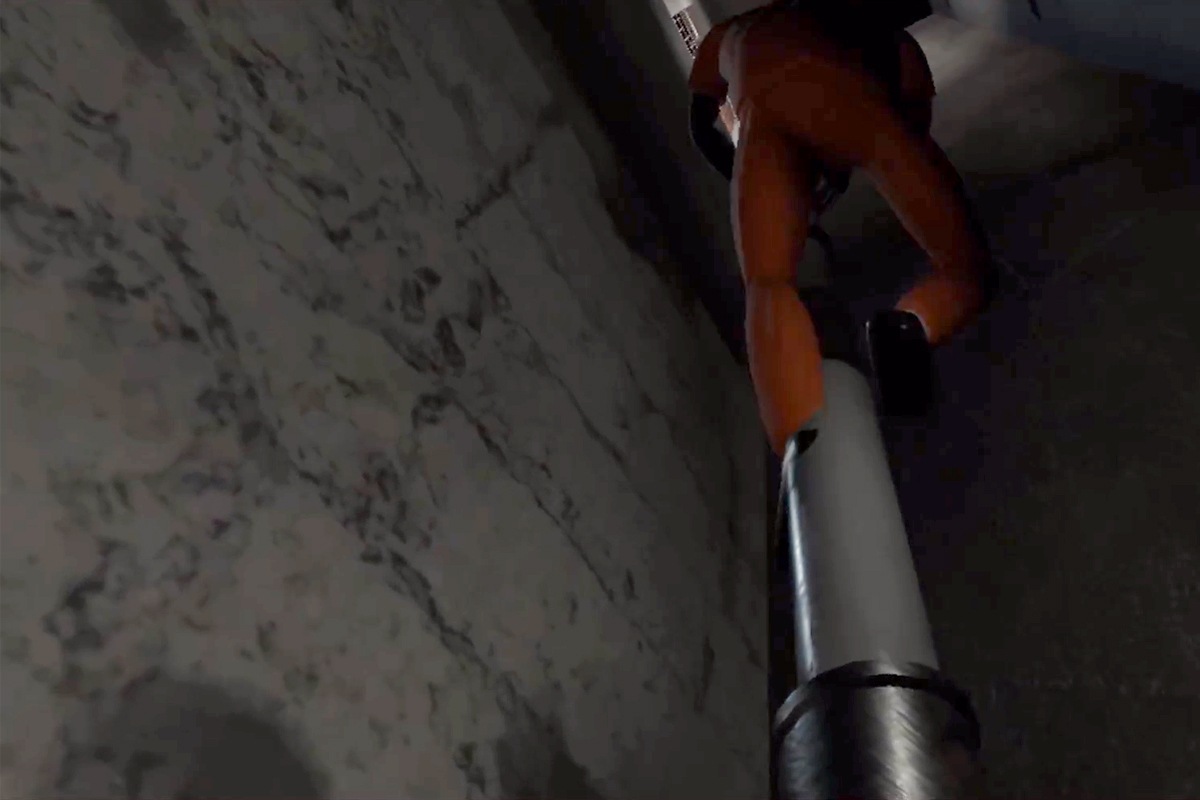 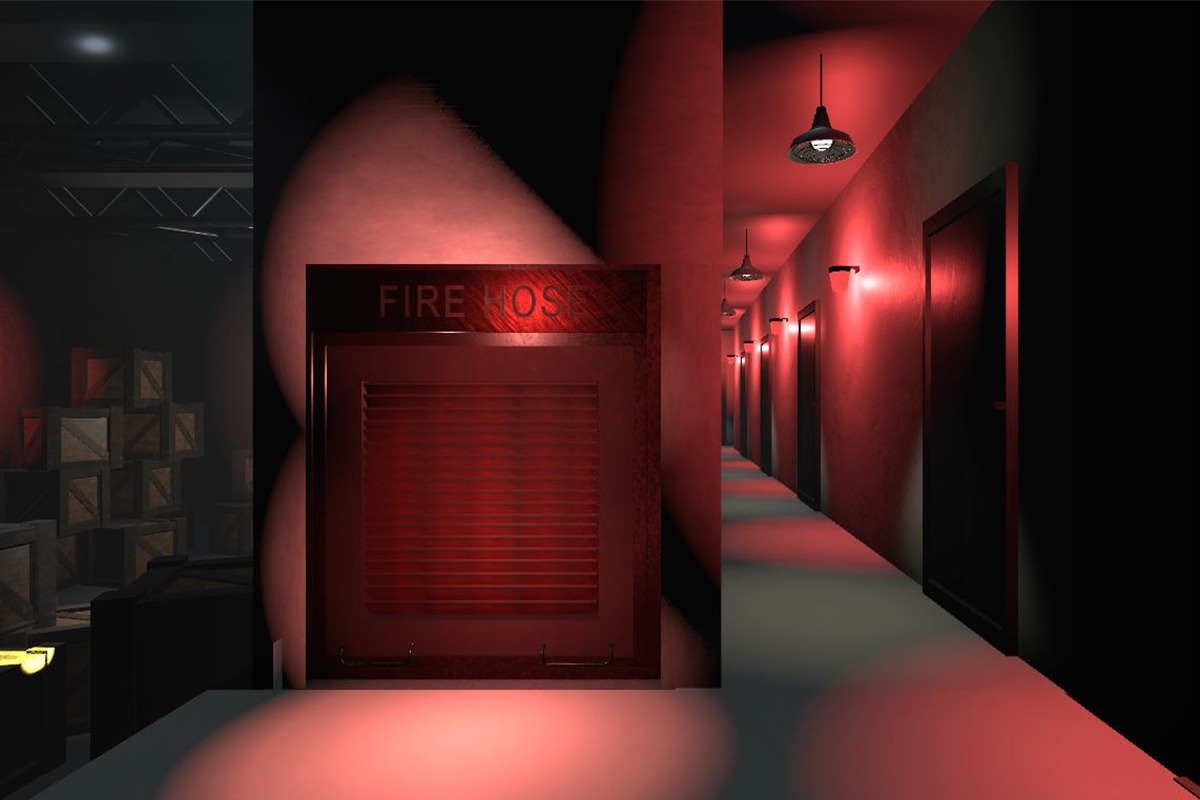 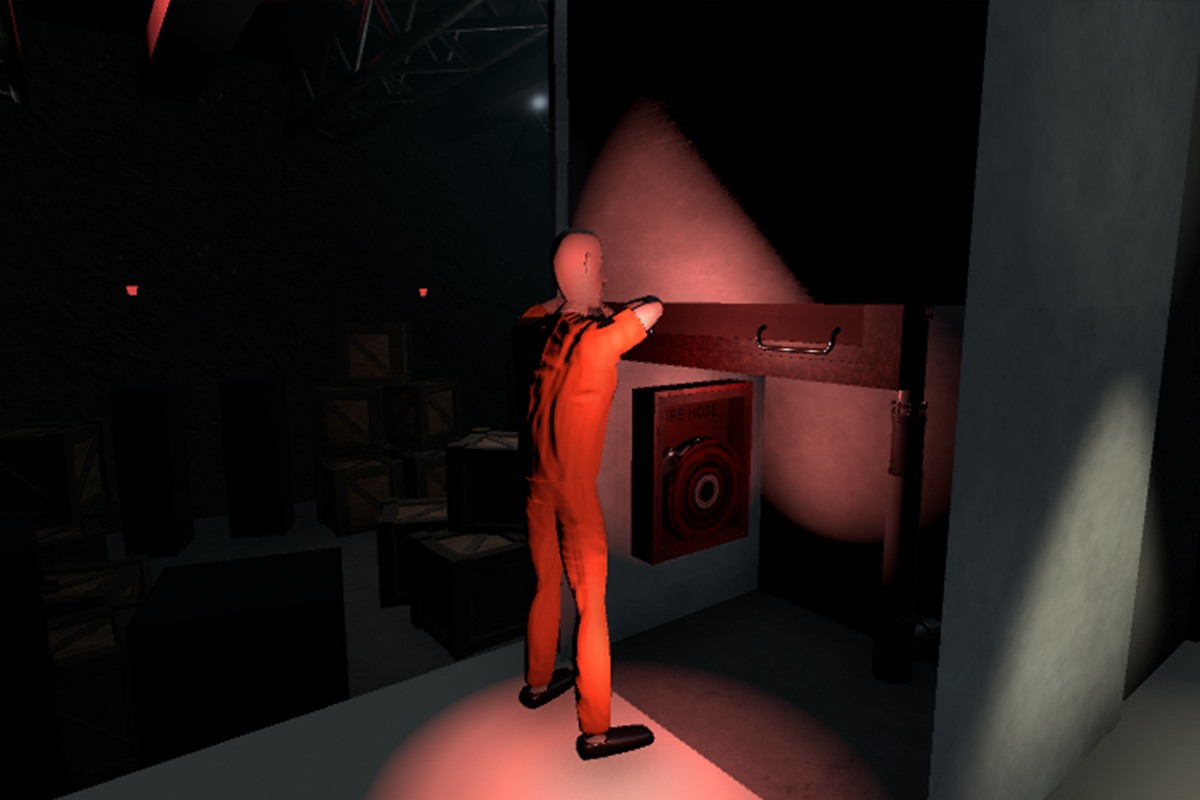 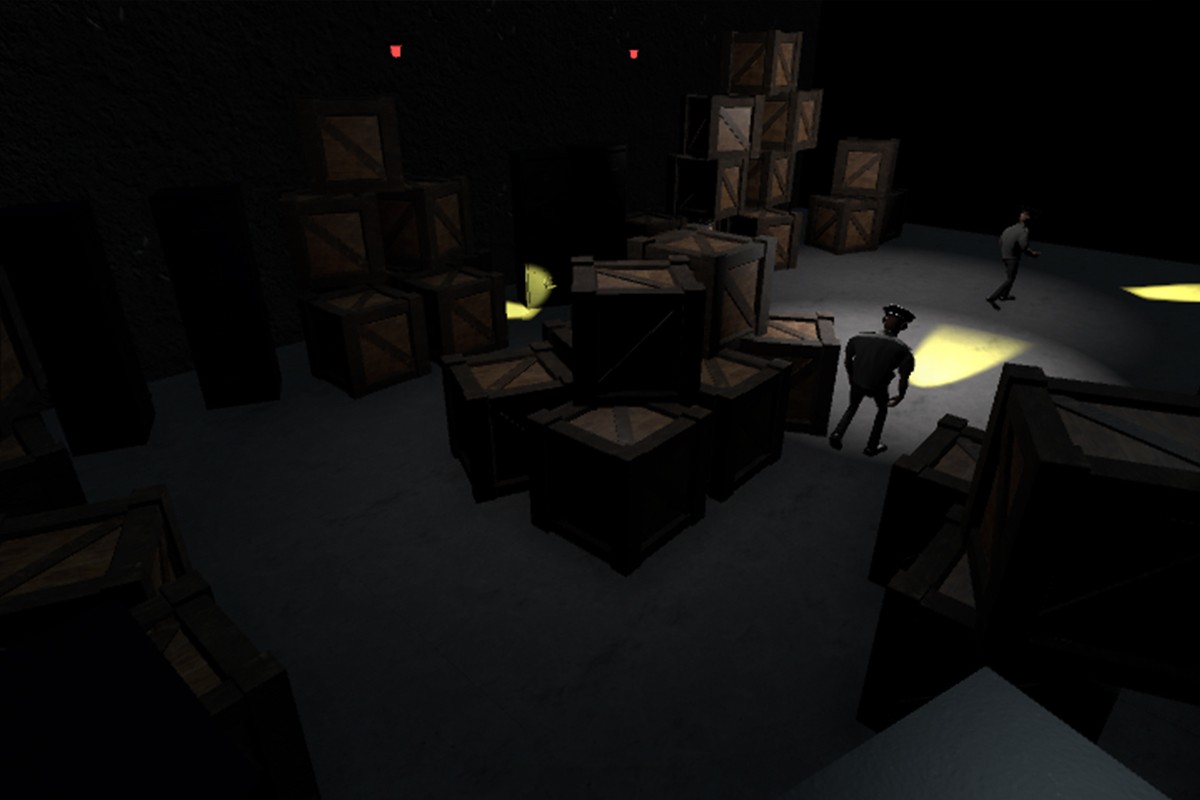 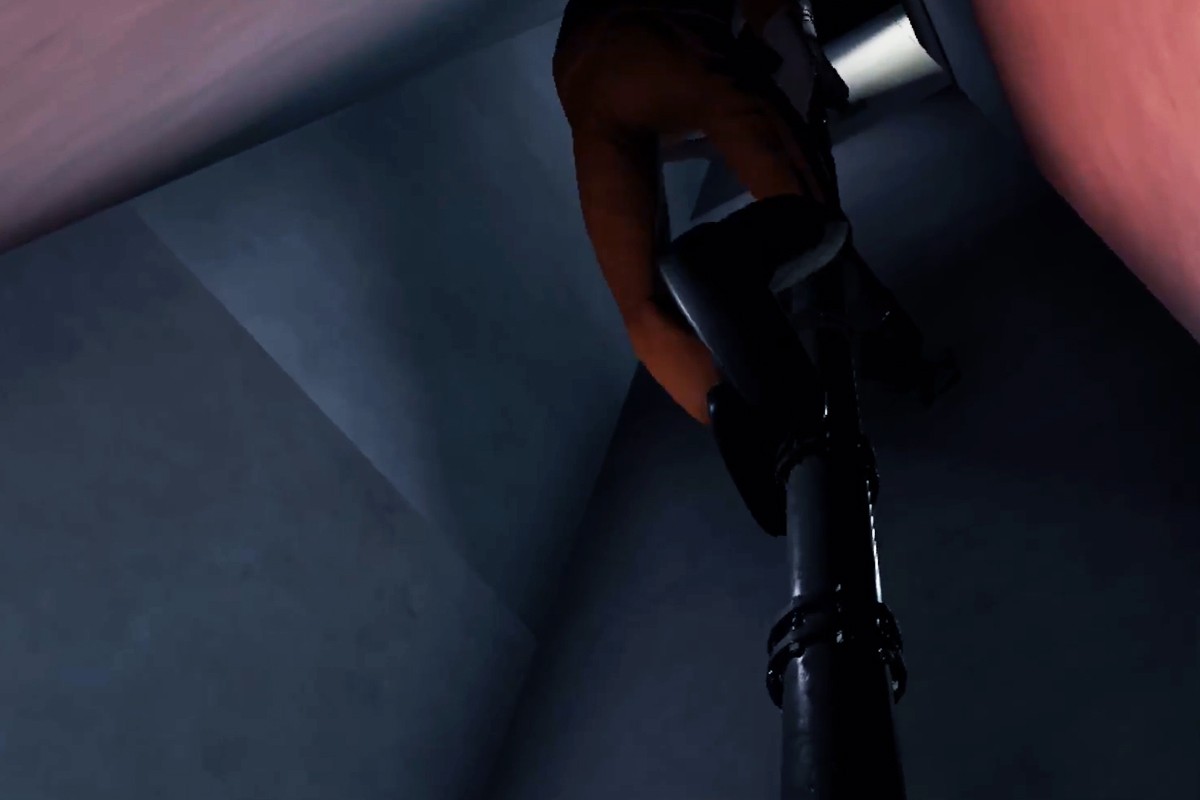 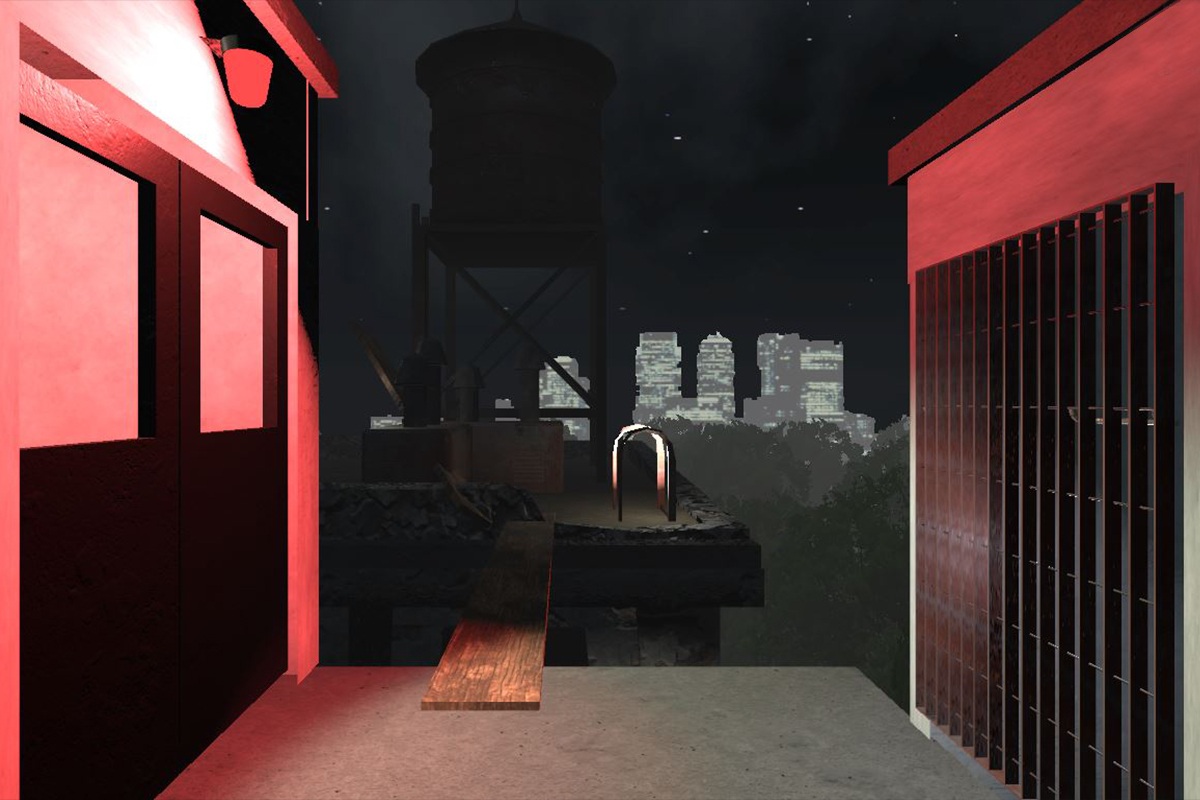 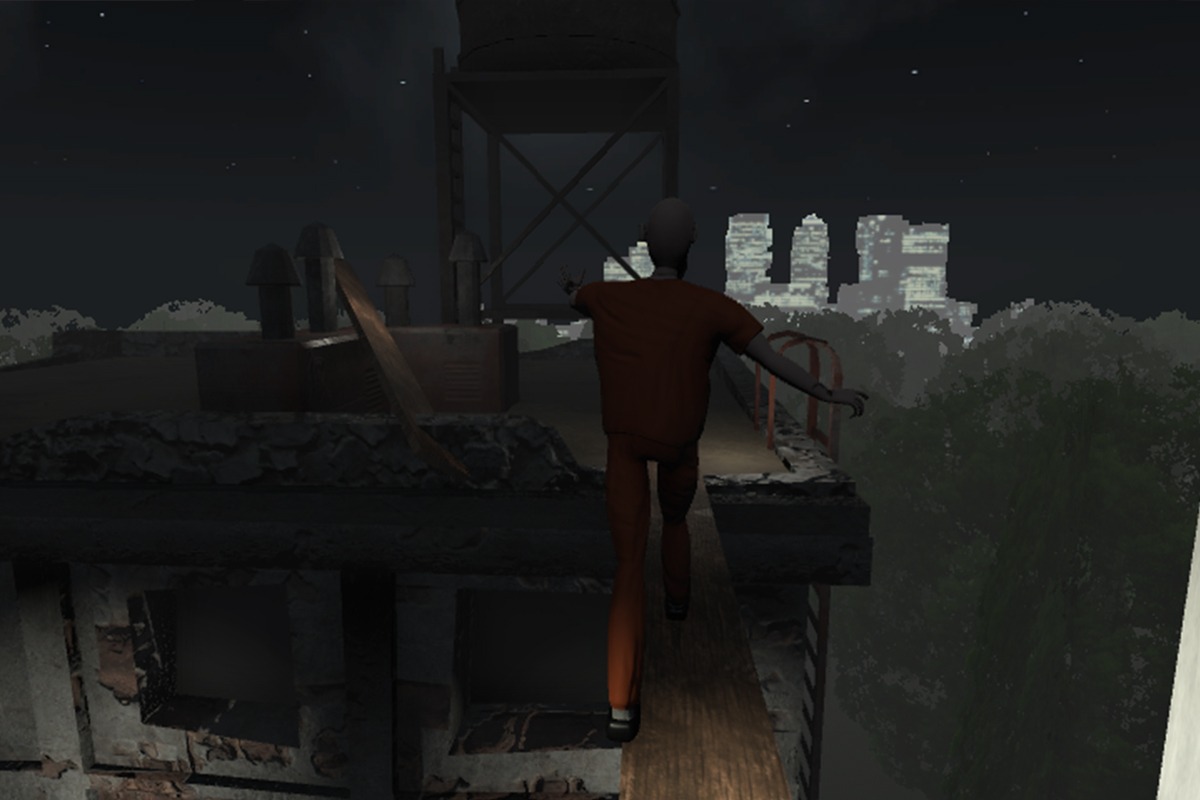 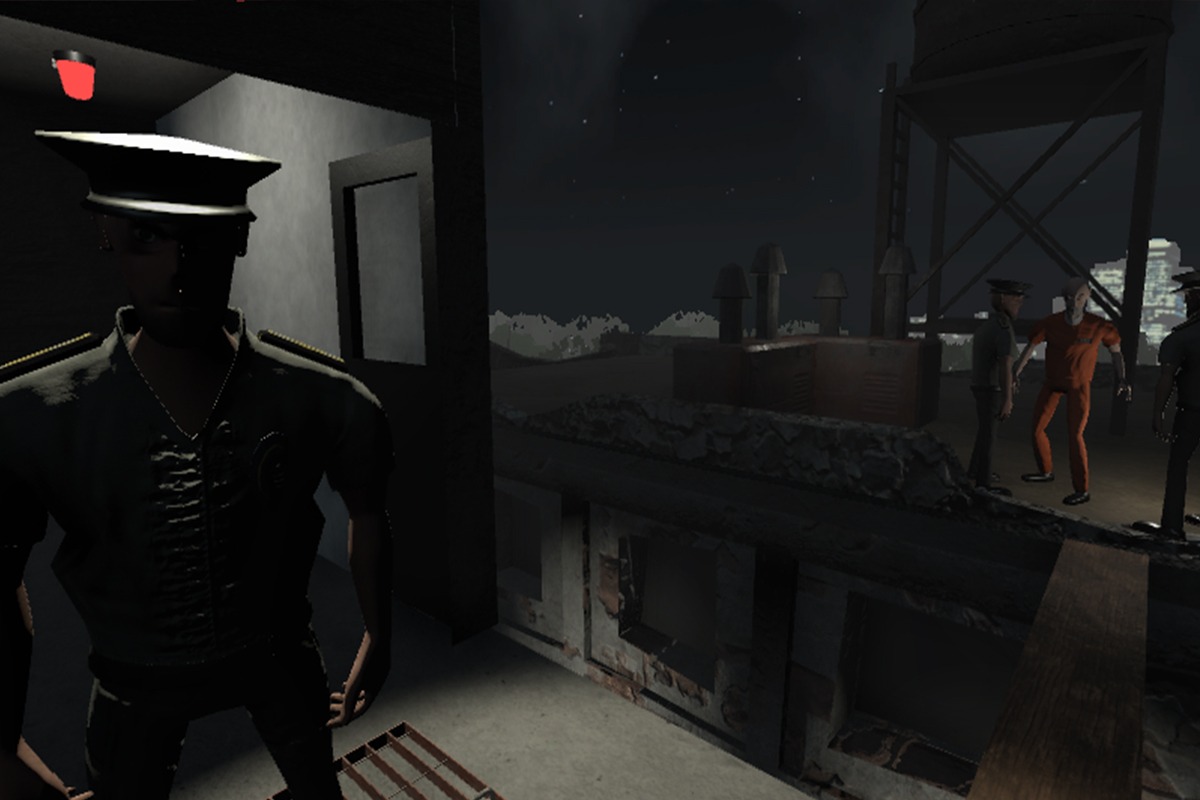 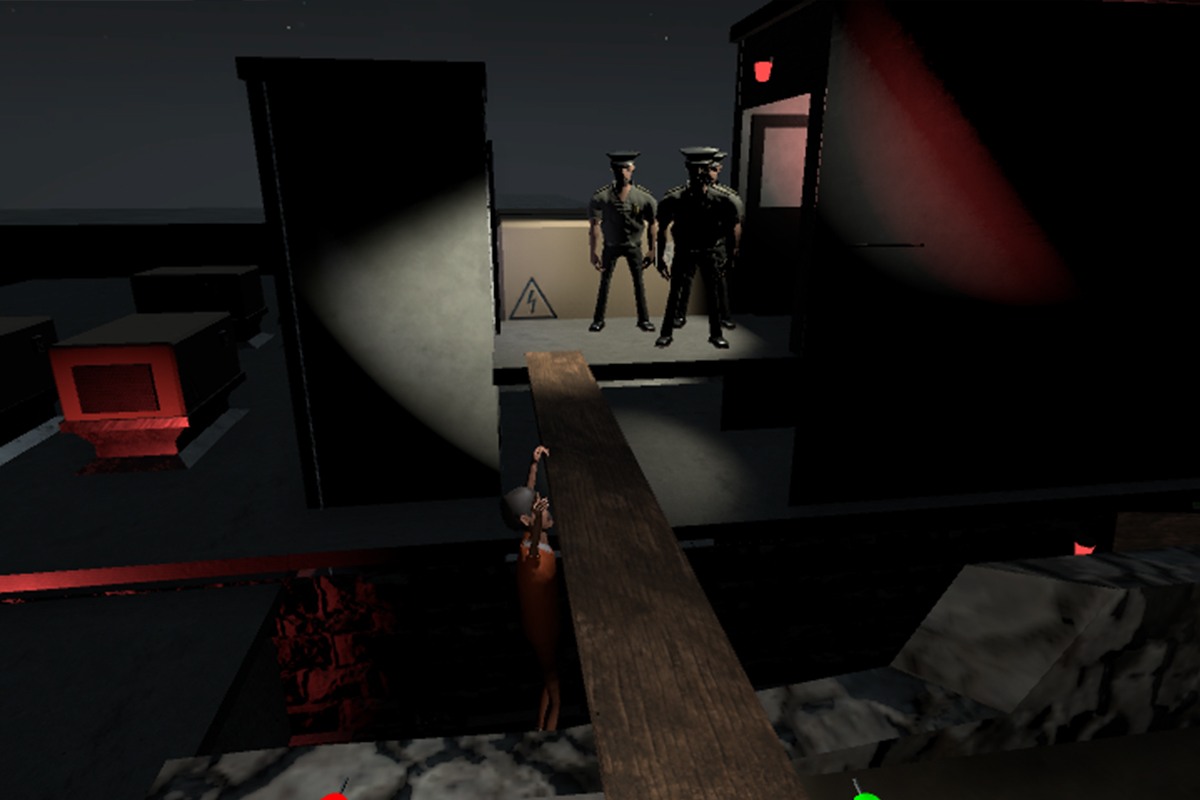 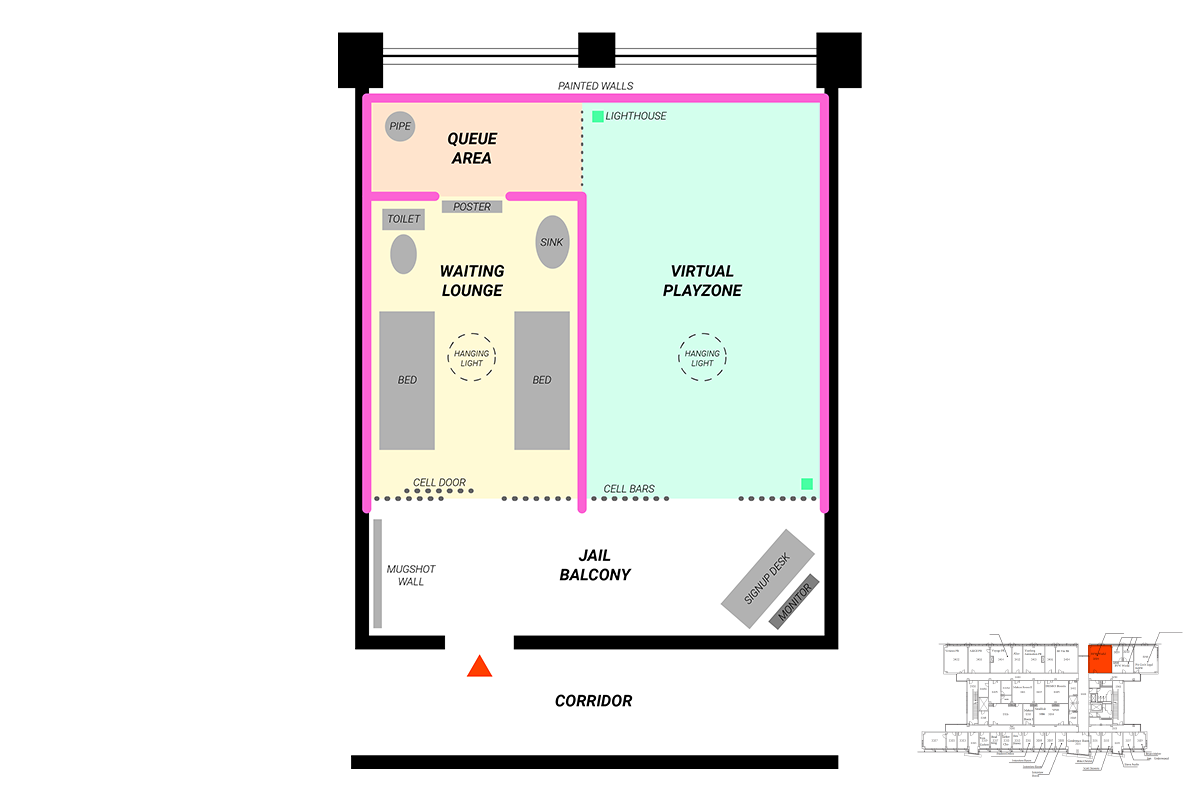 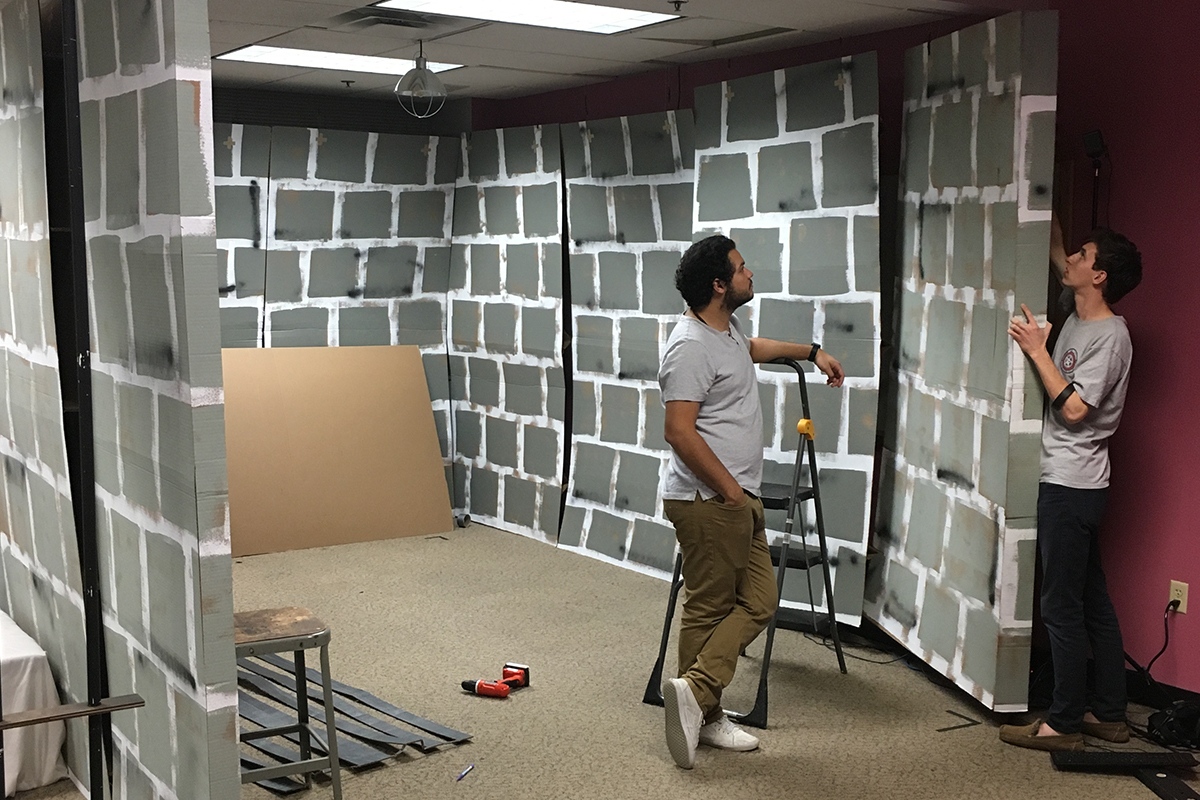 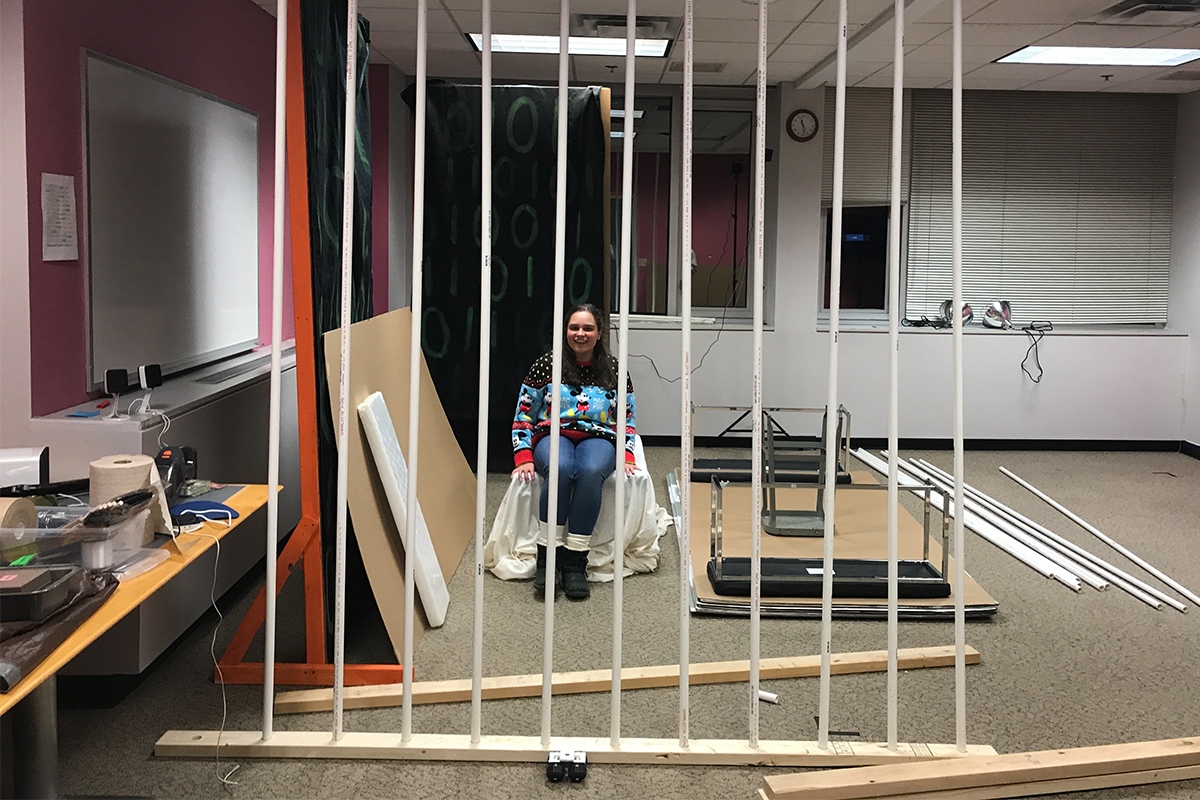 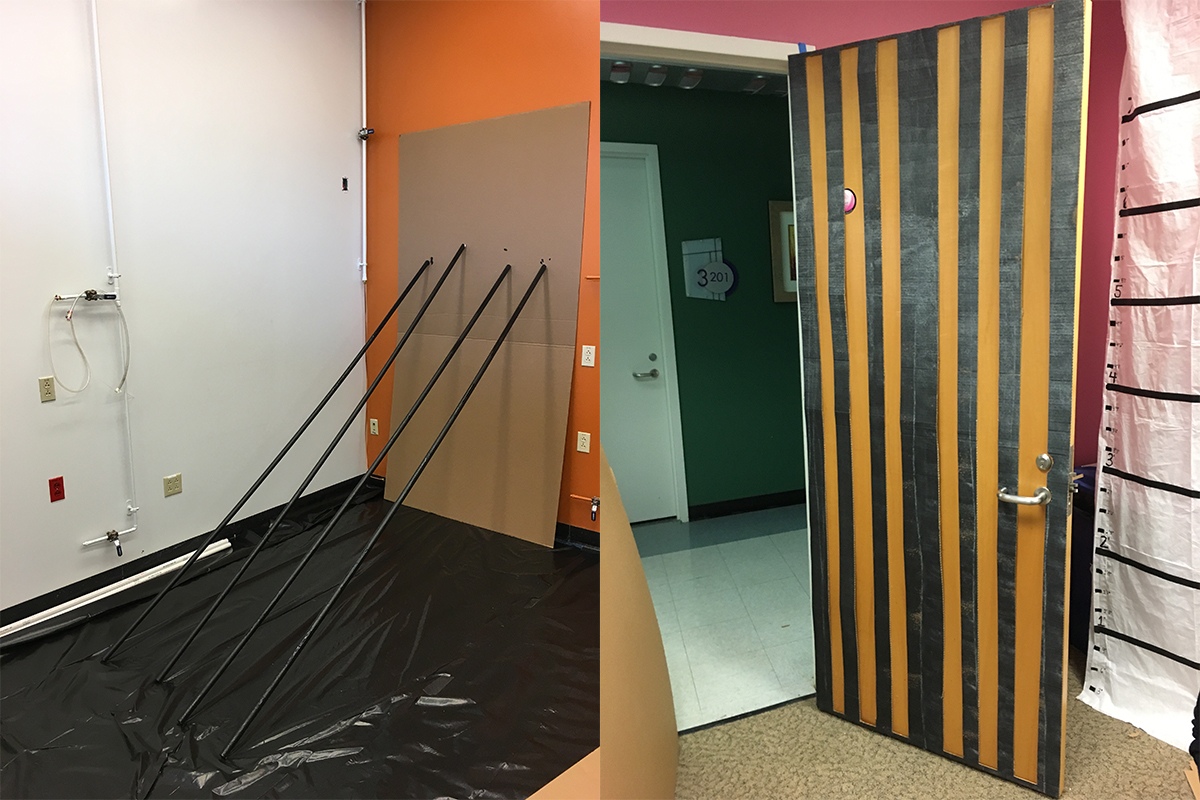 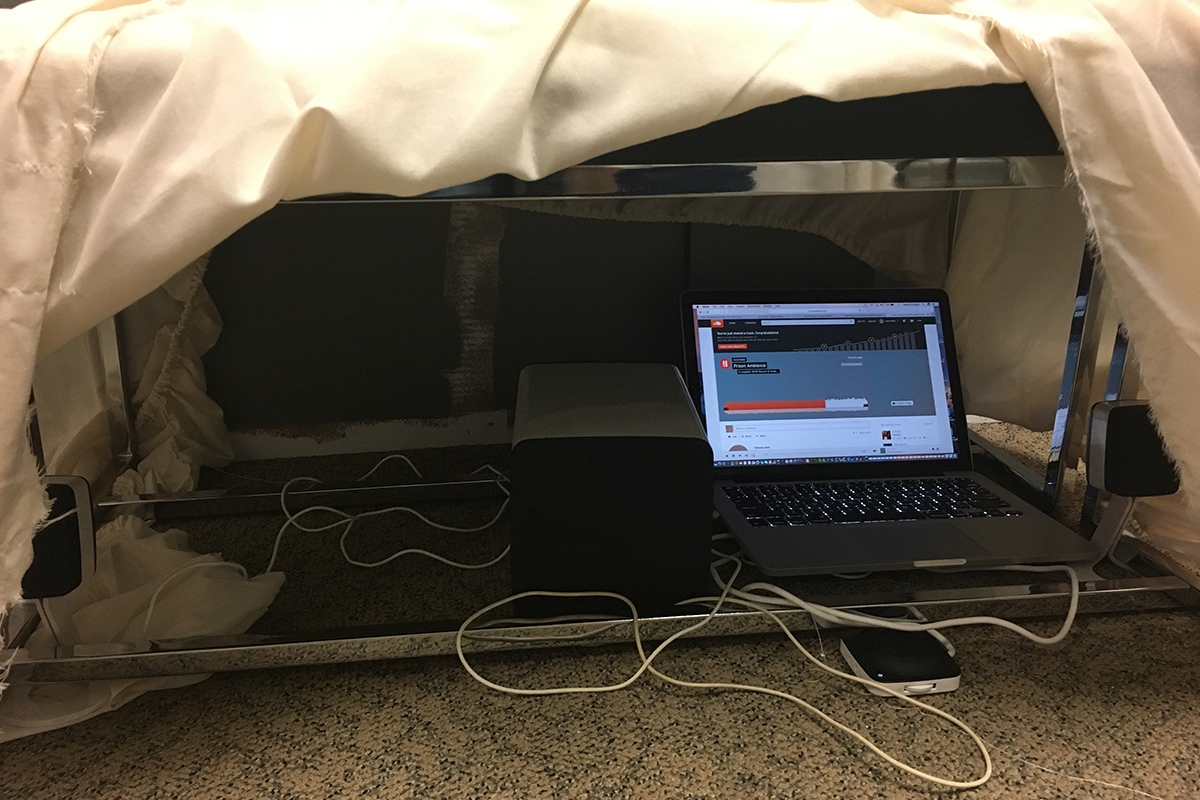 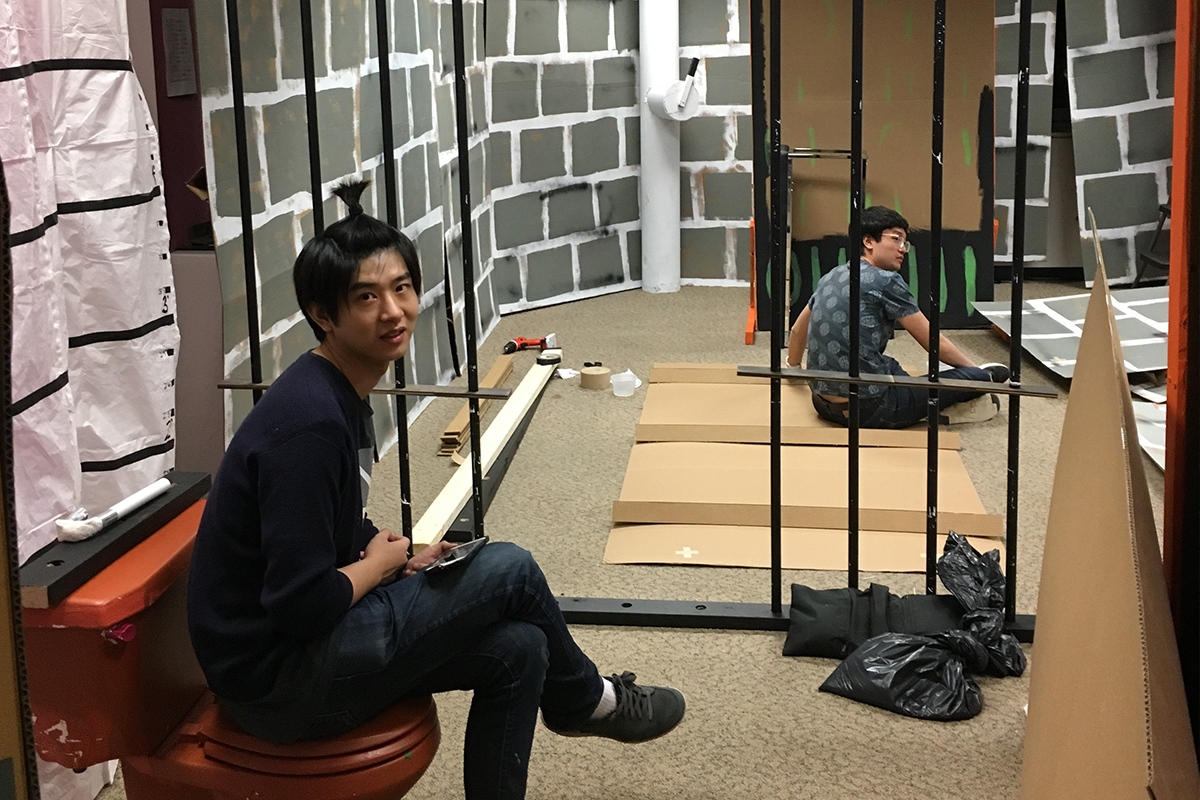 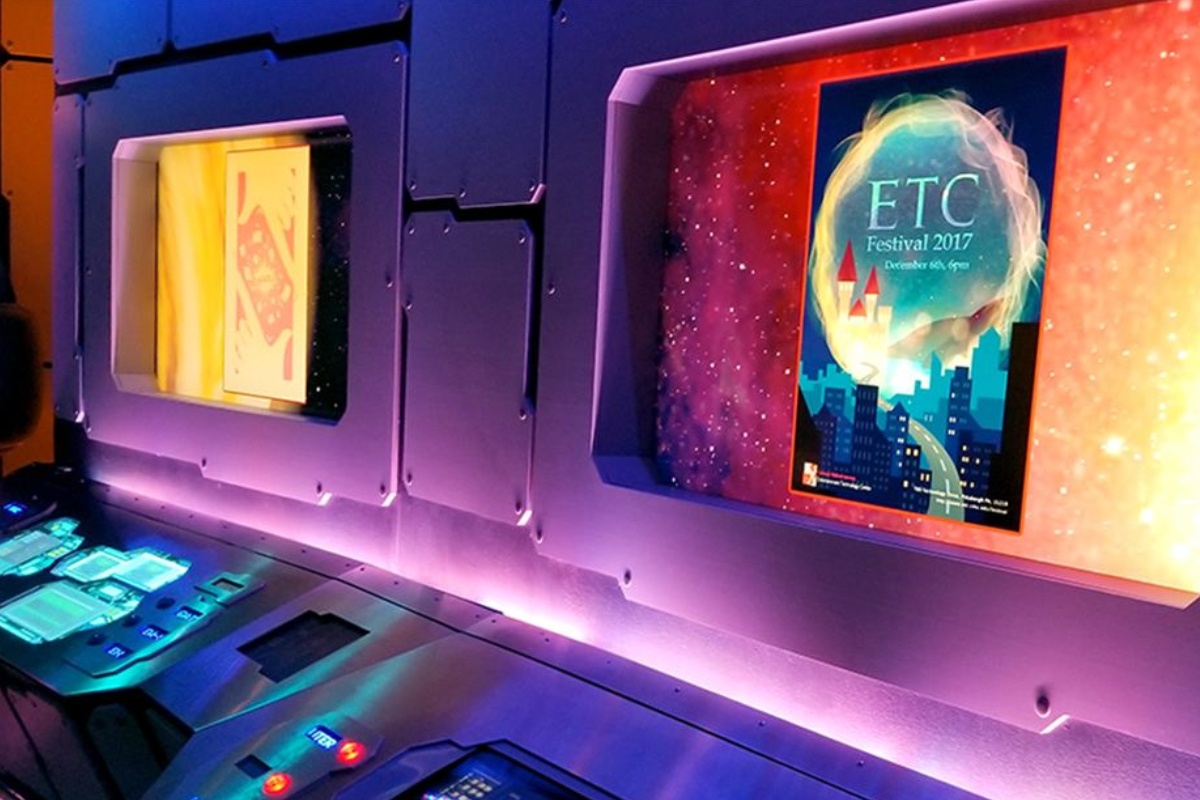 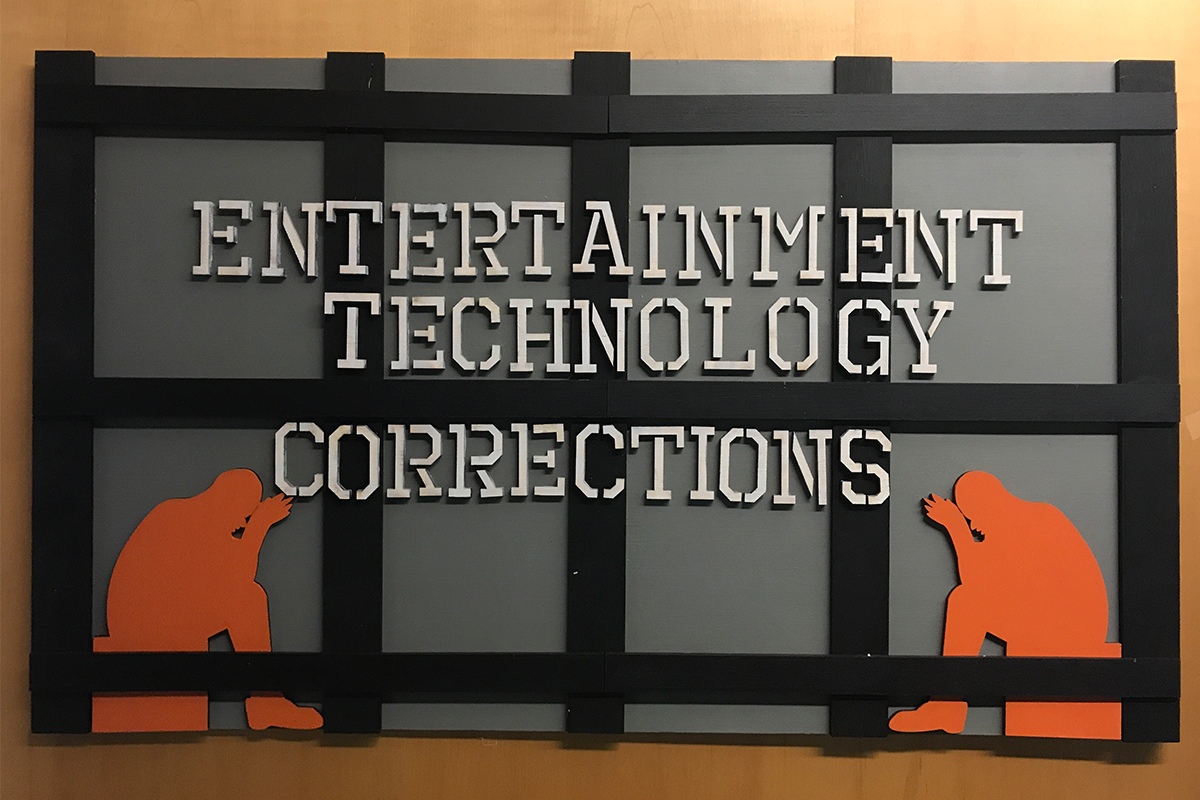 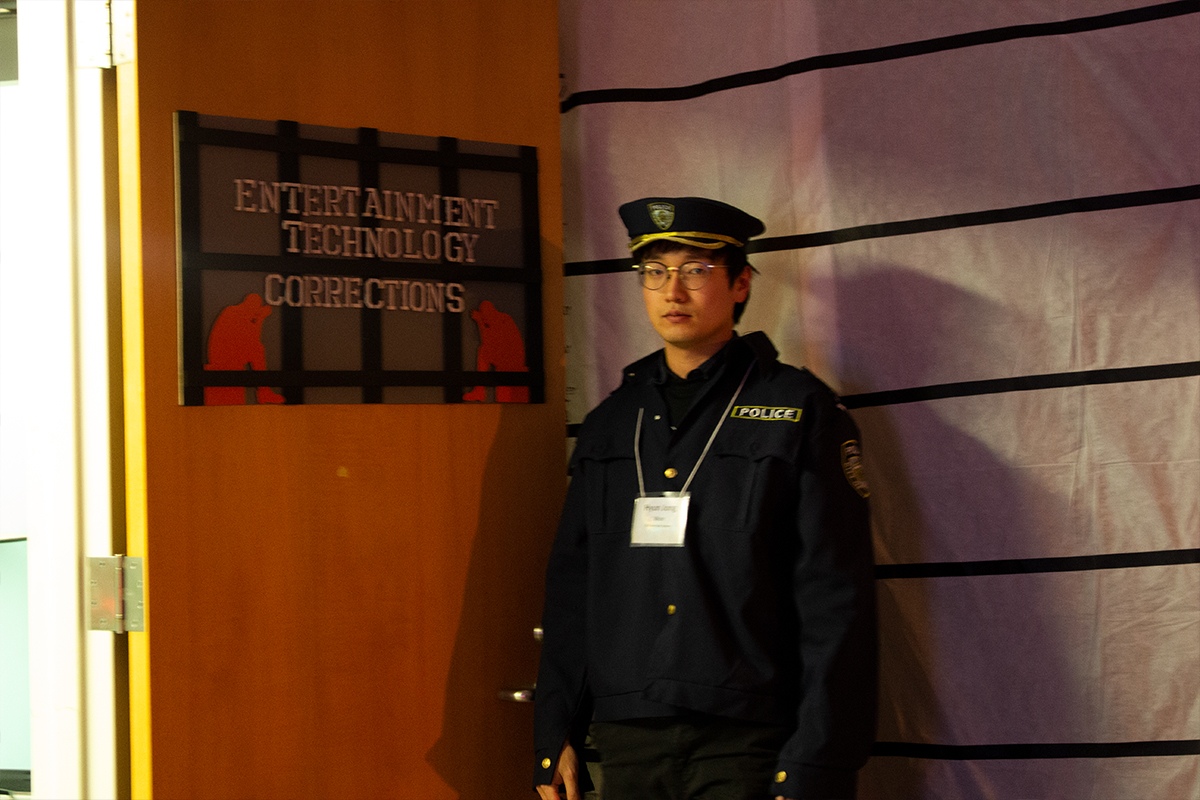 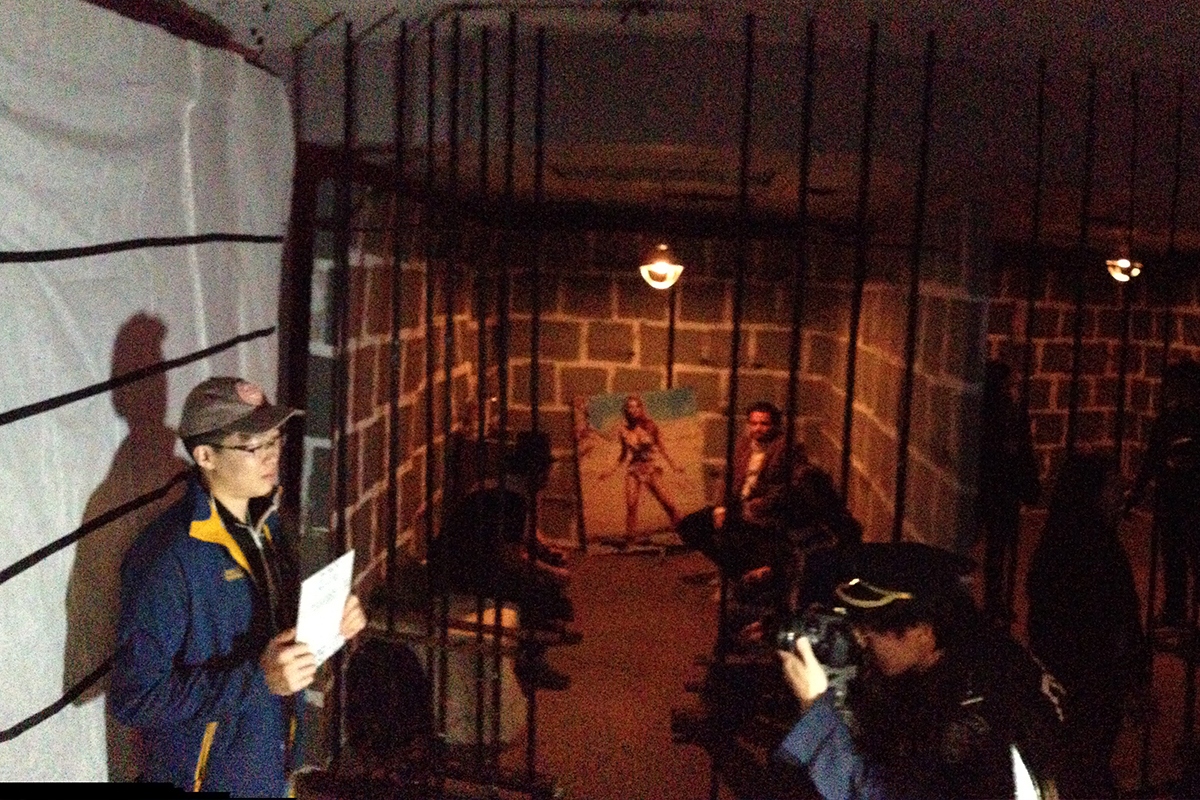 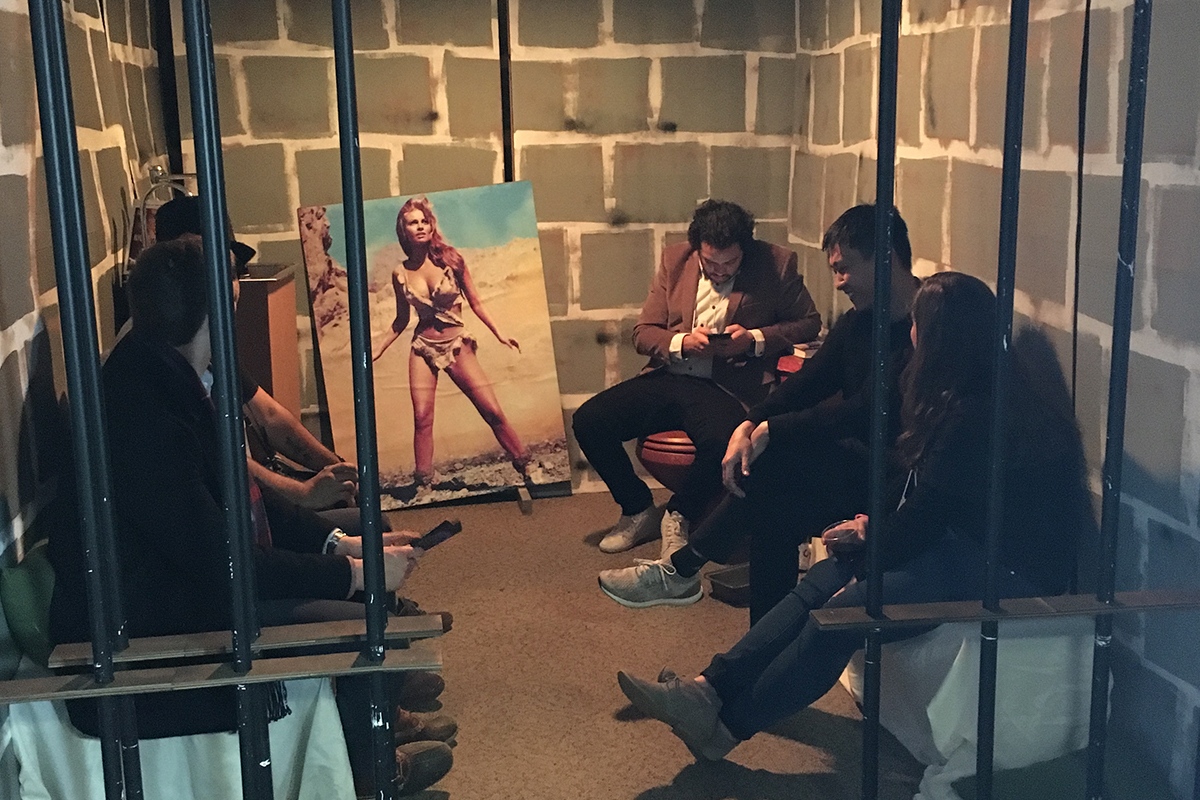 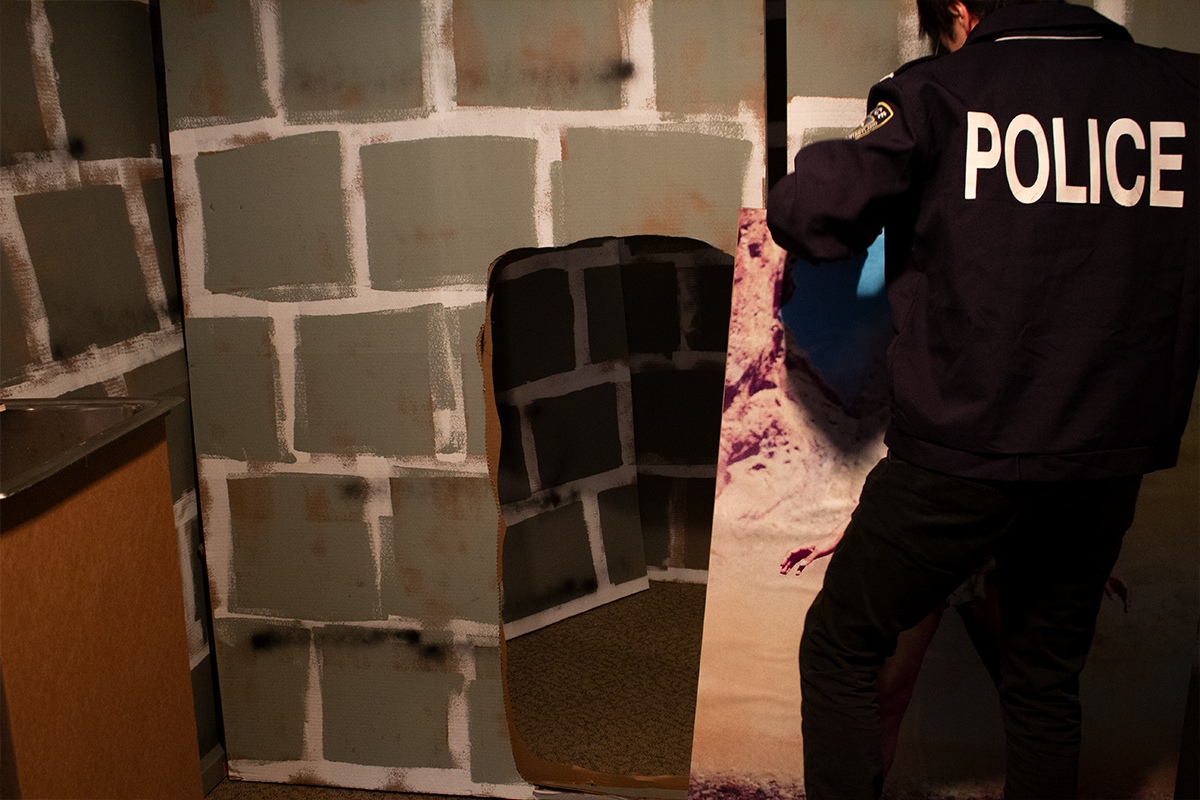 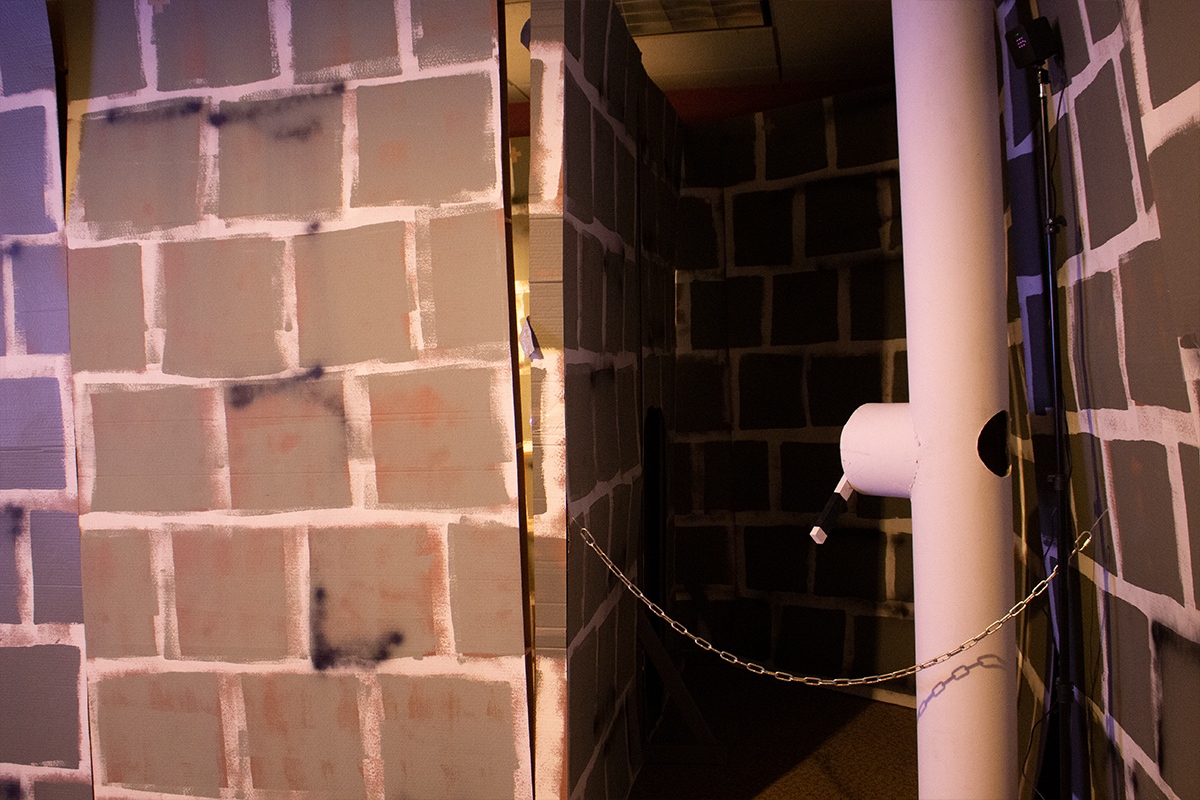 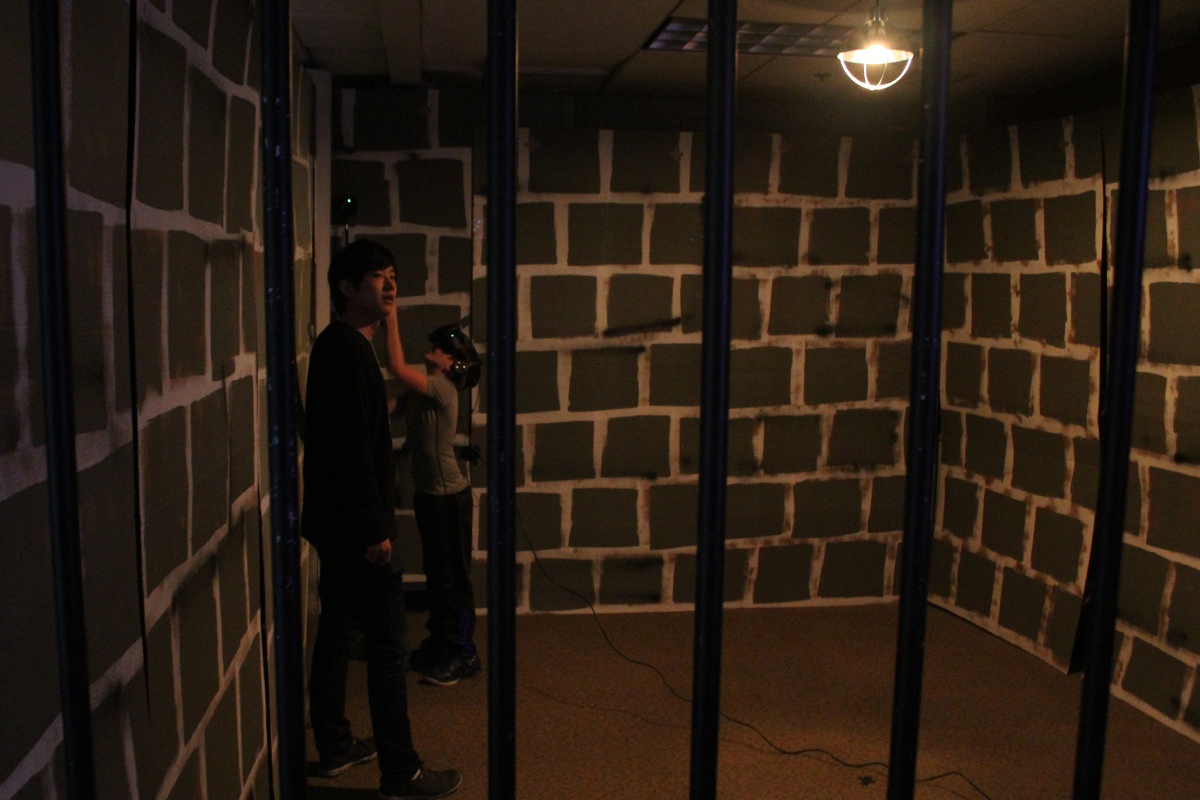