Food for Thought is a meta-cooperative tabletop survival game where 4 – 6 players are scrambling for food in desperate situations, where a piece of meat can mean the difference between life and death. Intended for ages 15 and up. Typical Game Length is 1 – 2 hours.

The game is a great icebreaker for all sorts of social settings. Discover the value of food in ways that you have never thought of before, while testing the limits of your wit by deceiving others to your advantage. Yesterday’s friend may be easily today’s foe. Just remember, put your self interest before others, even at the cost of your own humanity.

But, is one game enough to fully know someone? Of course not, that’s why we have two games! Even better, both are infinitely replayable! Depending on the roles you are dealt, unique relationships and social tensions will arise every time!

-Initially inspired by the character dynamics and day/night phases in Werewolf board game. (Detective game)

-The emphasis of roleplaying and improvisational acting in The Sheriff board game. The desire to collect as much food as possible. 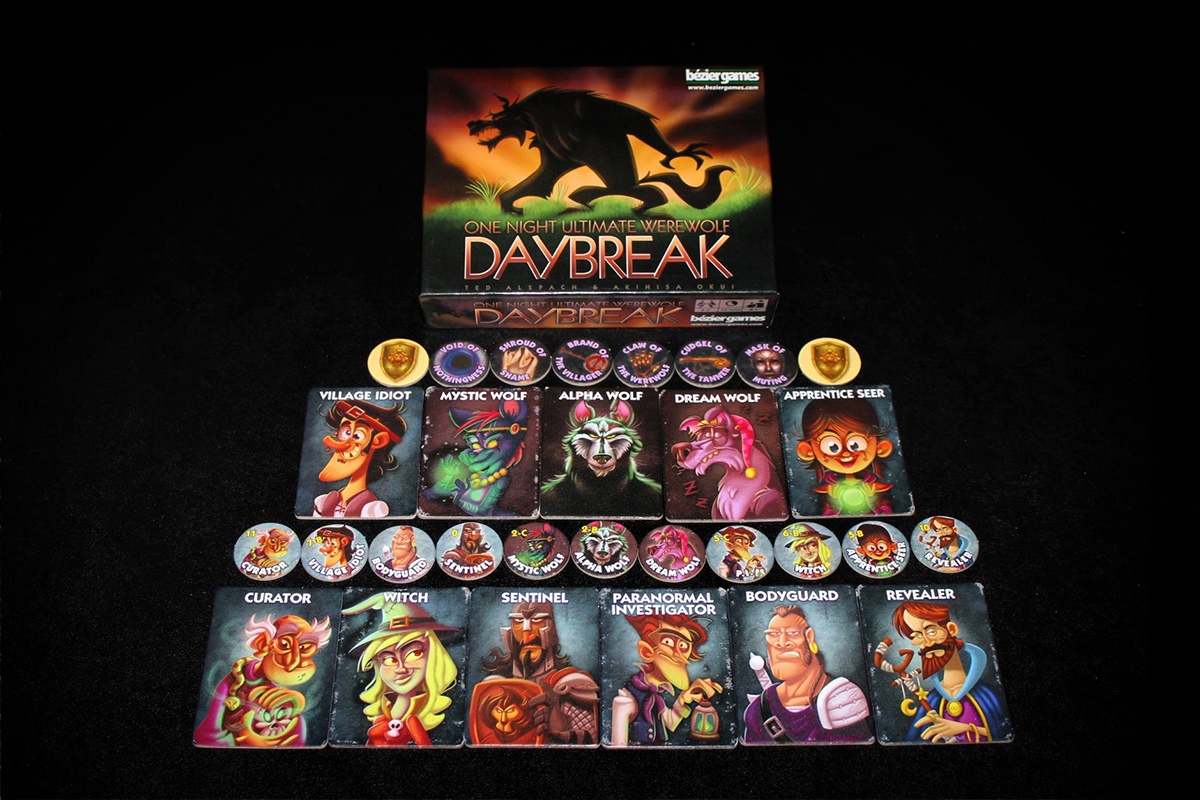 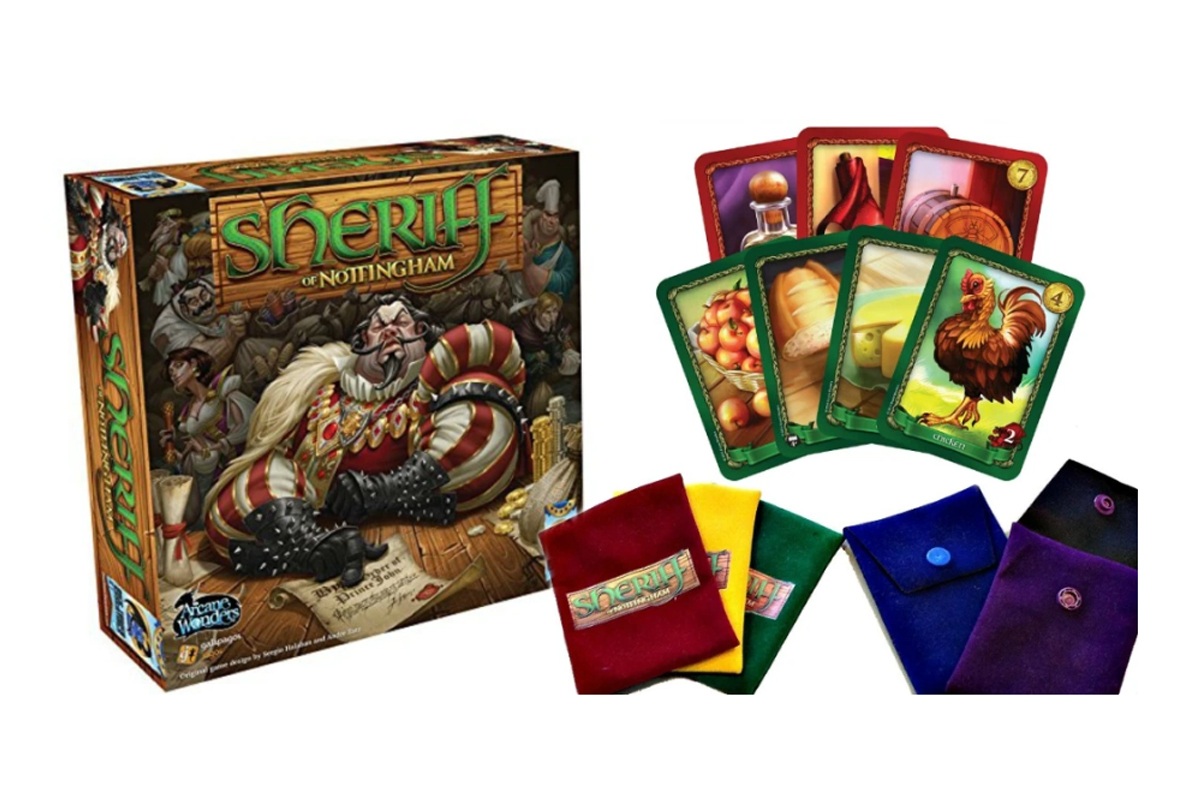 -Paper prototype; the scale and proportion. It was too deep and uncomfortable for people to reach inside.

-Cardboard prototype; reduced the size of the opening to decrease visibility and increase a sense of mystery box. Tried perforating near the bottom to enable players to gauge how much food is left, but it turned out it gave away too much information and took away the mystery.

-Separated it into a two-piece assembly so that you can take off the lid easily to take out the content.

-Its function is twofold: a resource box for the game, but also as a container package to hold the game materials. 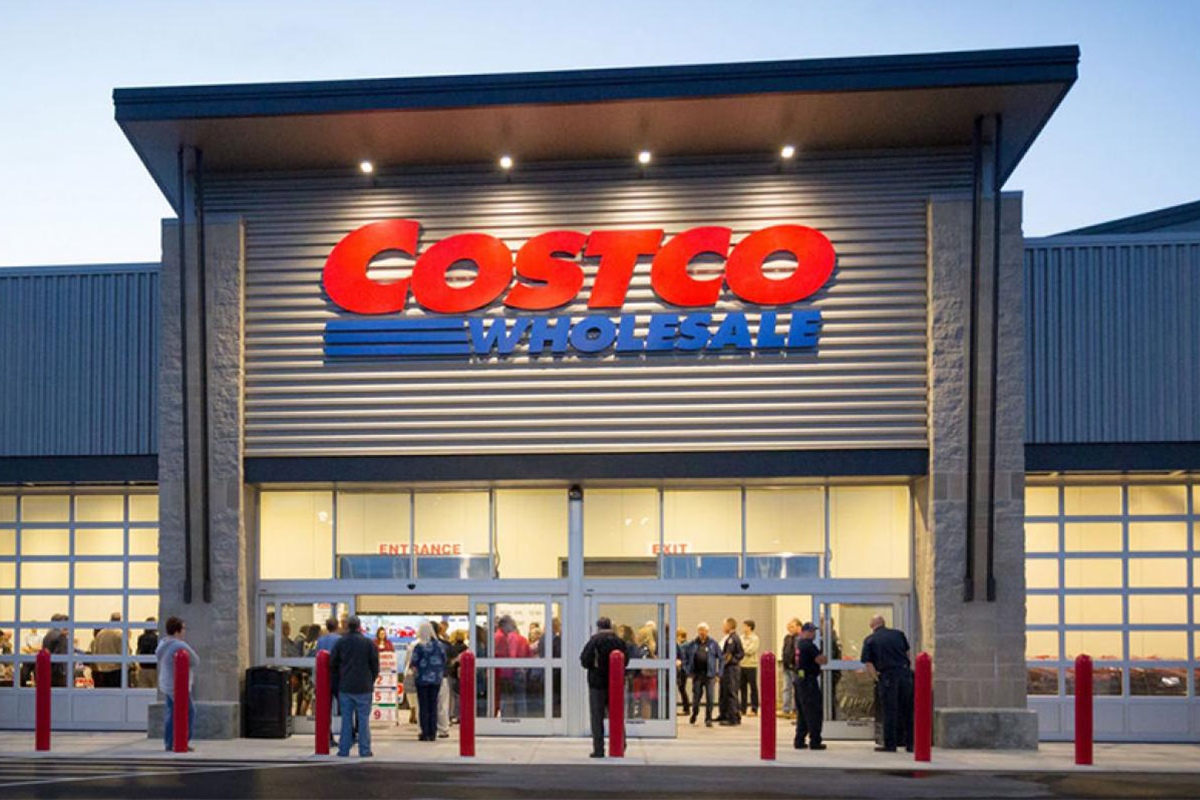 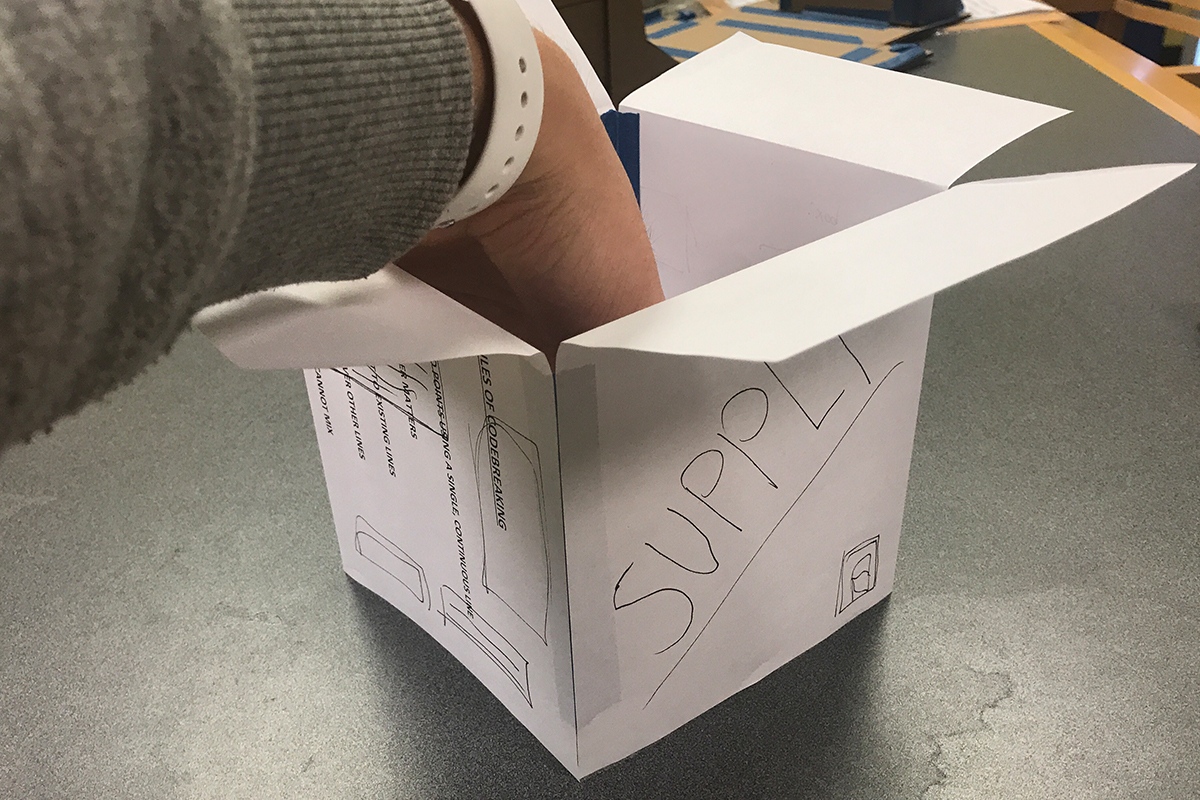 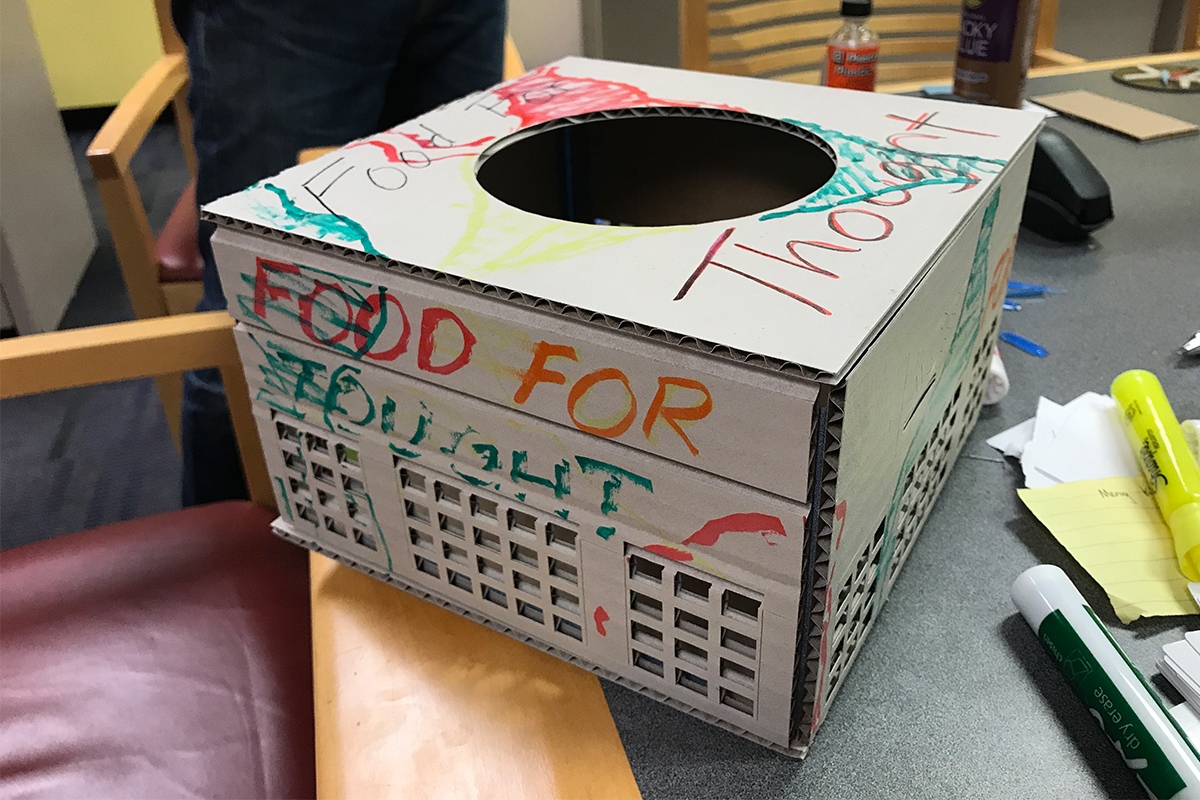 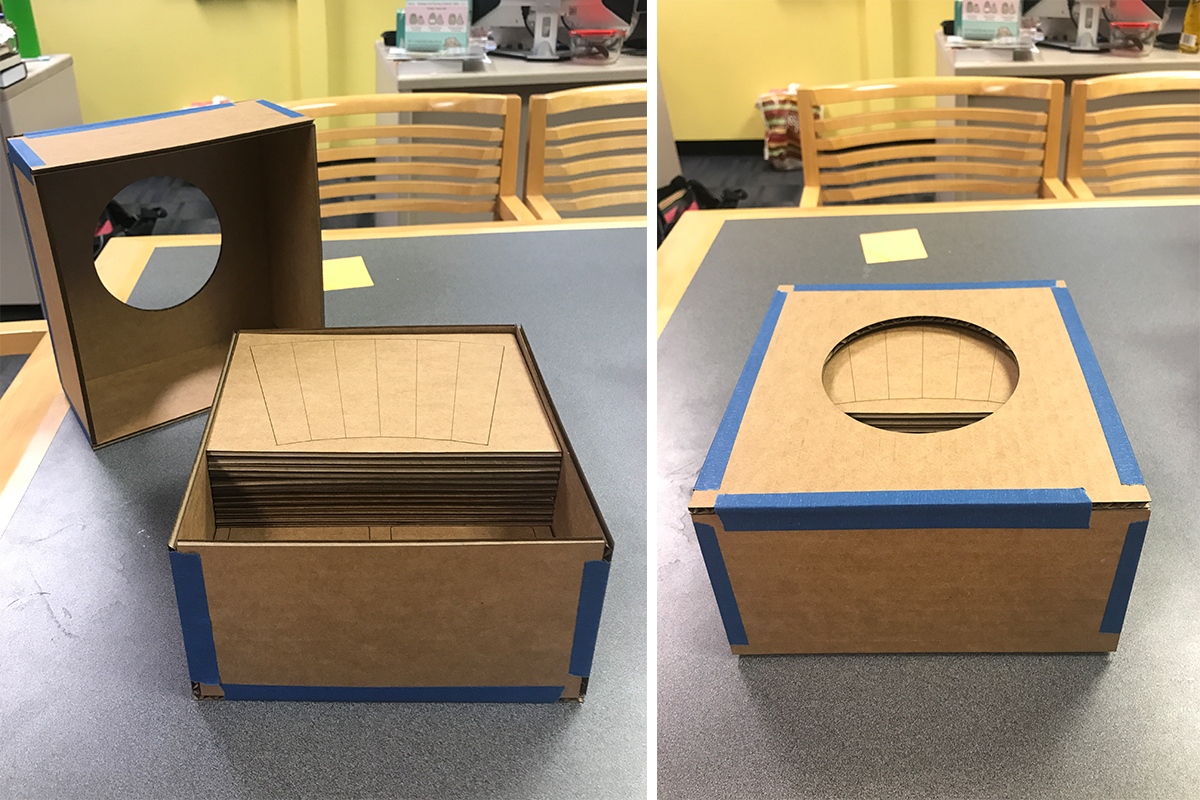 -Similar to the Sheriff, the food tokens were initially designed as cards.

-Wanted to tap into the tactility of physical tokens; make it more desirable and precious as resources. Also, I wanted to make it immediately obvious what the tokens are from their shapes and looks, not having to read descriptions on a card. Initially I tried primitive shapes, like circles, triangles, and rectangles, but they were too abstract for people to associate meaning with.

-Since the food tokens are stored inside the market box and the players can only touch them before picking,  I wanted the players be able to guess what the tokens are from tracing the silhouettes. So the silhouettes had to be iconic and distinct. I also made the sizes small enough to be concealed within a palm’s grasp.

-I wanted to differentiate the value of the food tokens with colour: red for bad, green for good, and blue for normal. 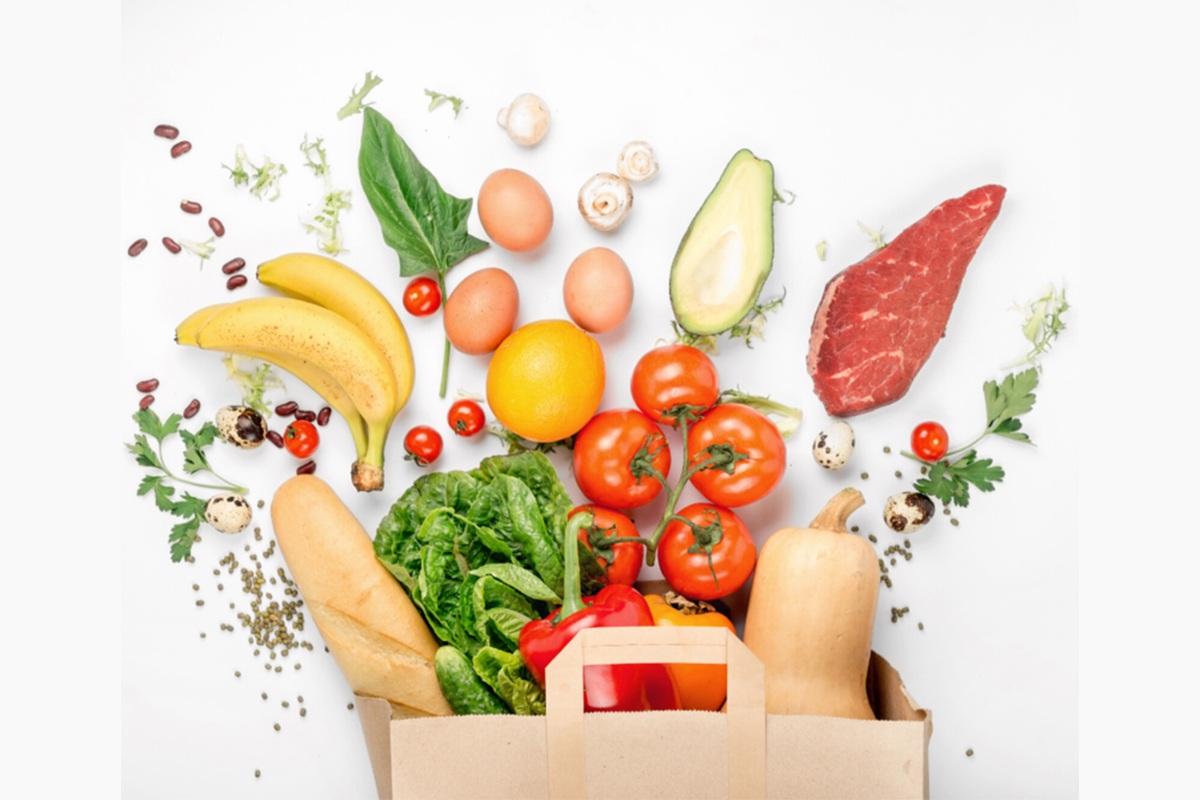 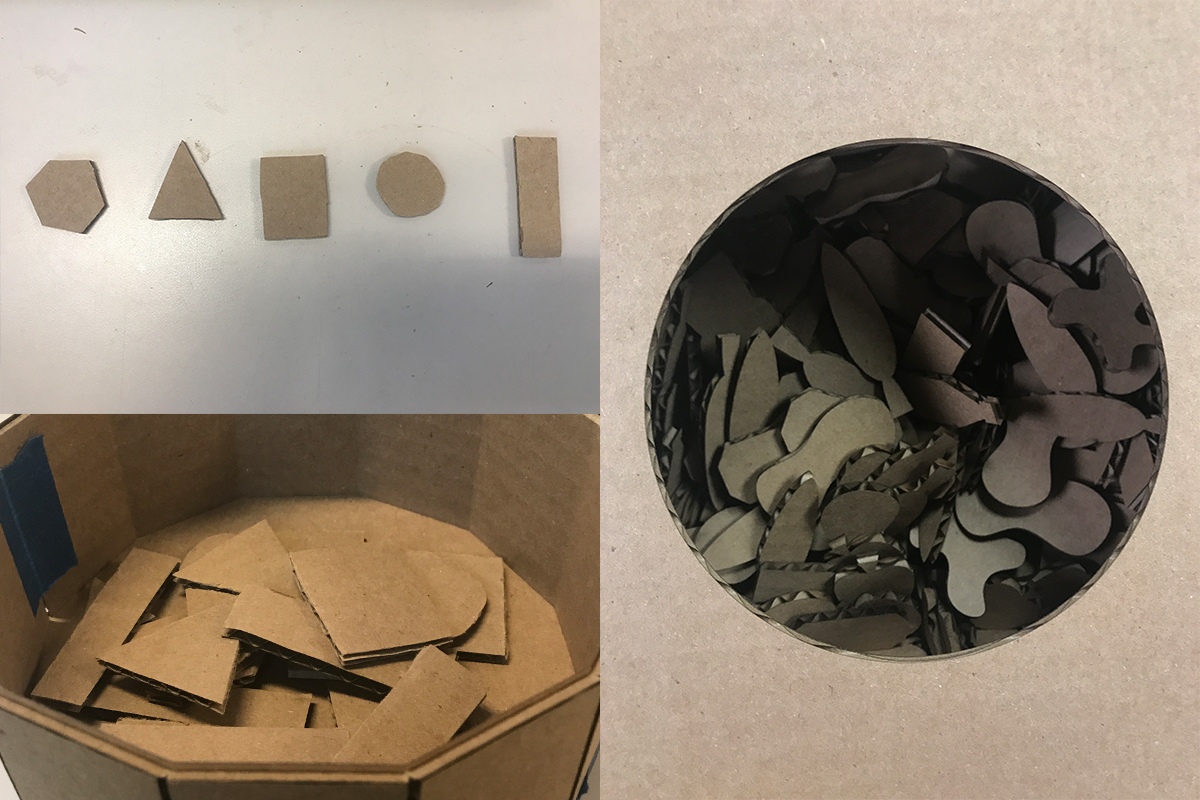 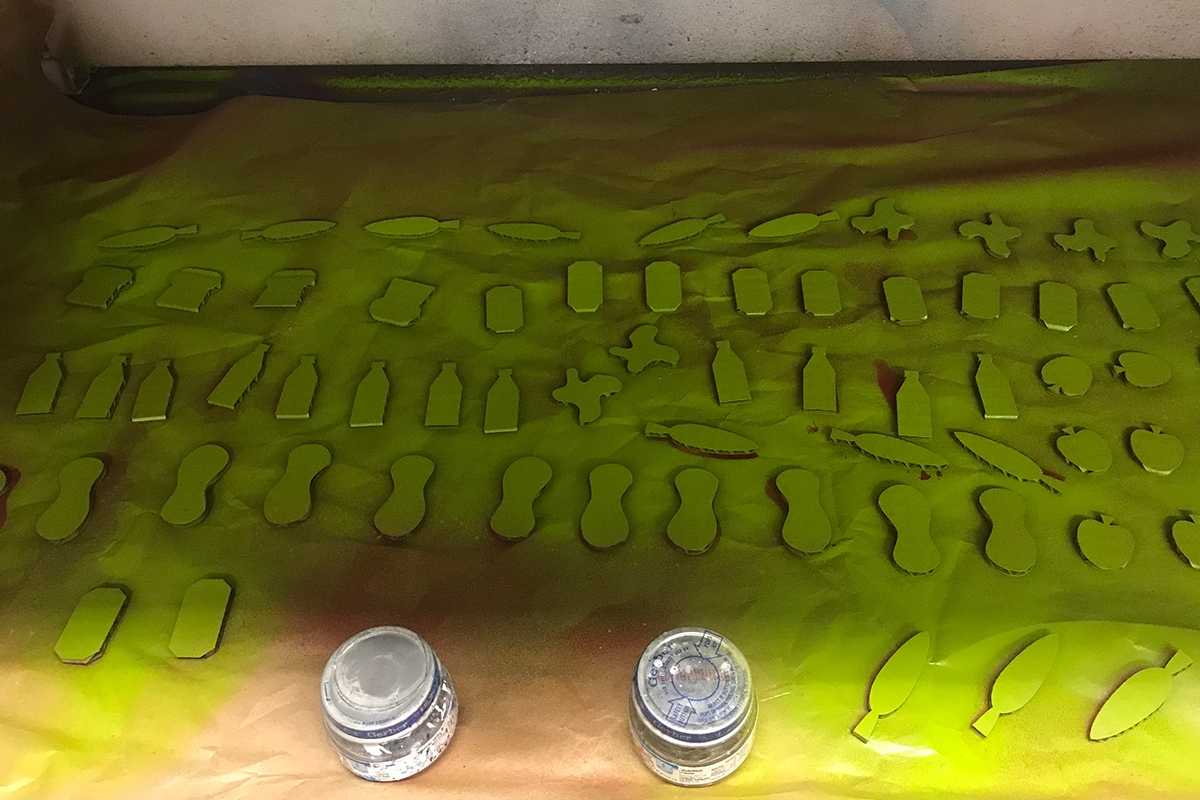 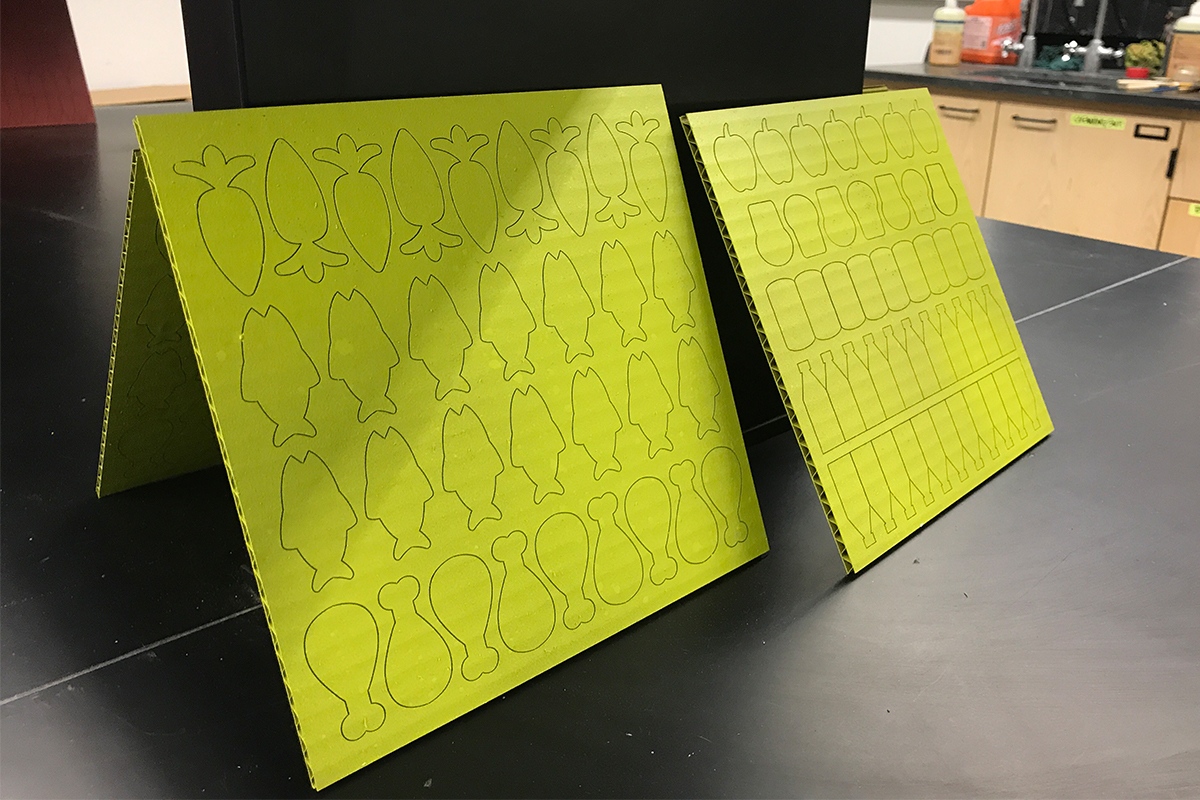 The buckets are the players’ storage space for their resources. I was inspired by the beggar’s bucket and wanted to convey the dire poverty and desperate need for food.

-Paper prototype: initially I just took letter-size paper and created a cylinder. They didn’t have a base, so the players couldn’t easily move or pick up their buckets when they wanted to. Also it was too fragile so I needed to make it out of more rigid material.

-I then made a cardboard prototype with a shape that is evocative of a bucket. I designed the profile tapering towards the bottom so that the players can easily reach into the buckets. However, the buckets were too deep, so the players could not reach into others’ buckets without tipping them over, giving them away. Also, it was too large for the players to want to pick them up, so the buckets remained stationary throughout the game.

-So I made the buckets generally smaller, and shallower so that players can easily reach inside. The tapered profile also allowed people to stack multiple buckets for easy storage when not in use. 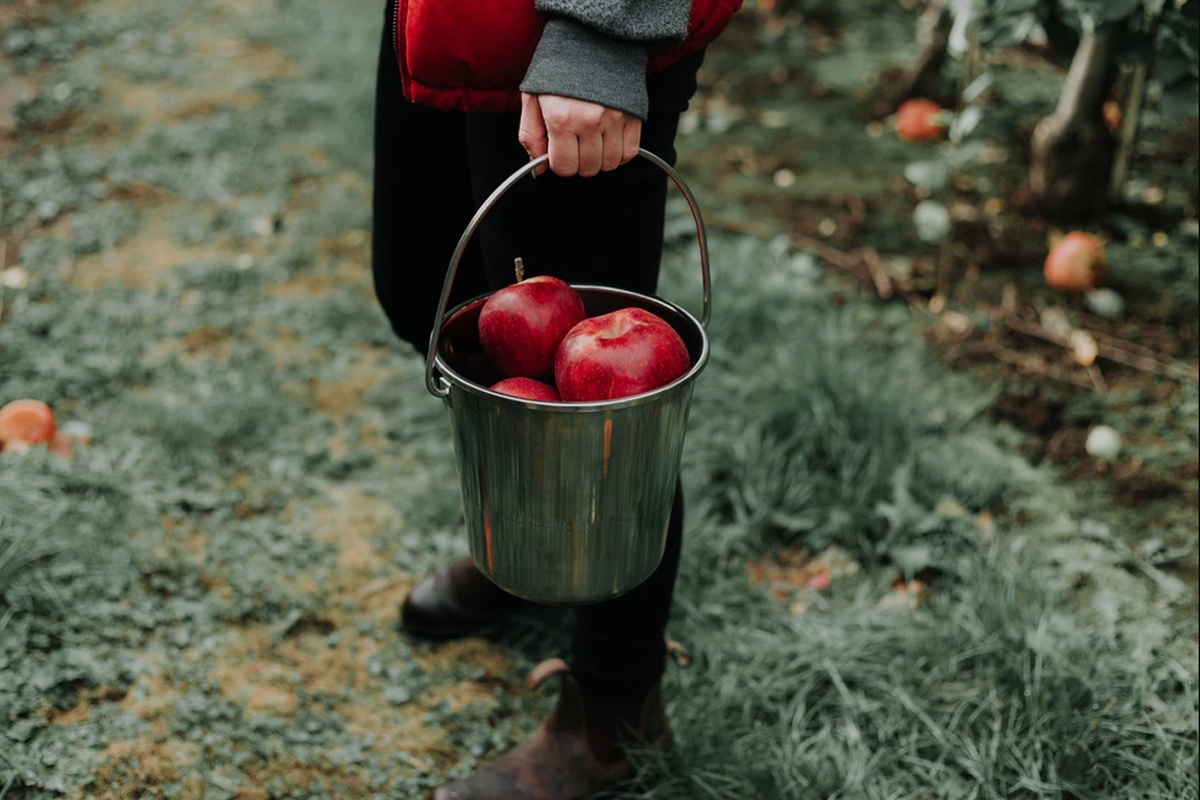 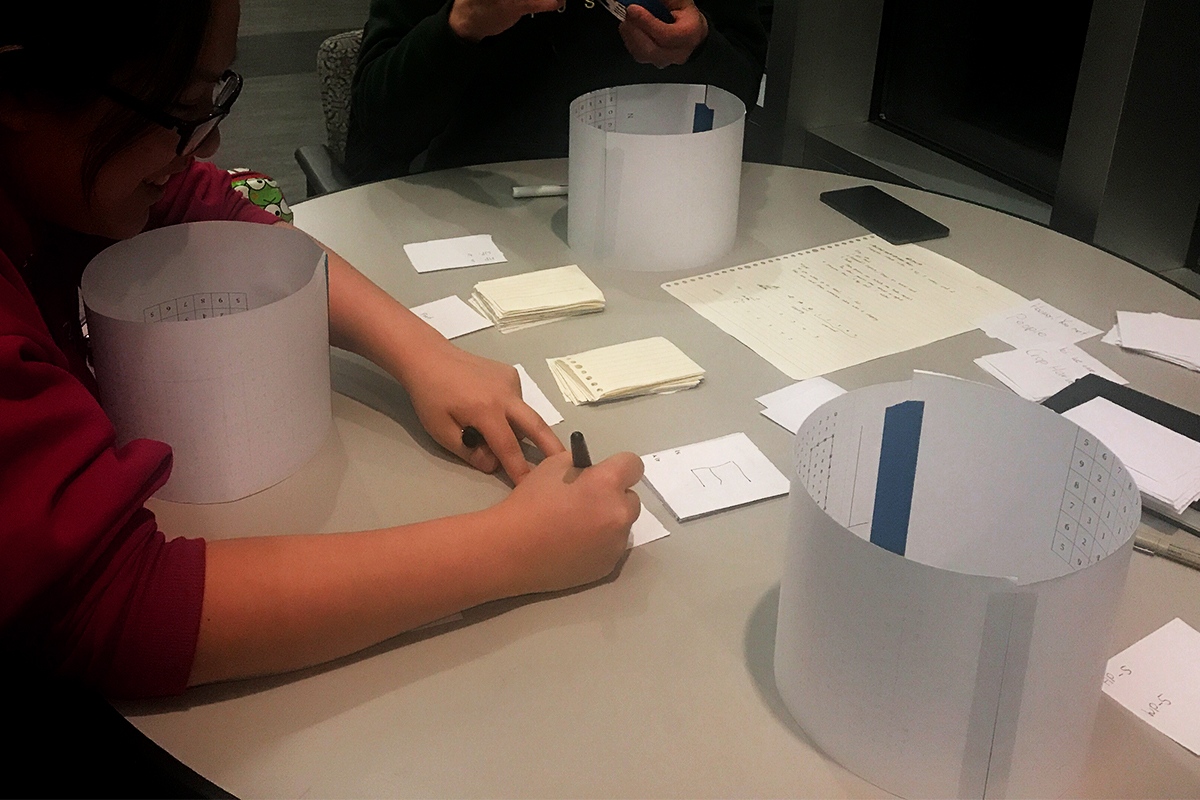 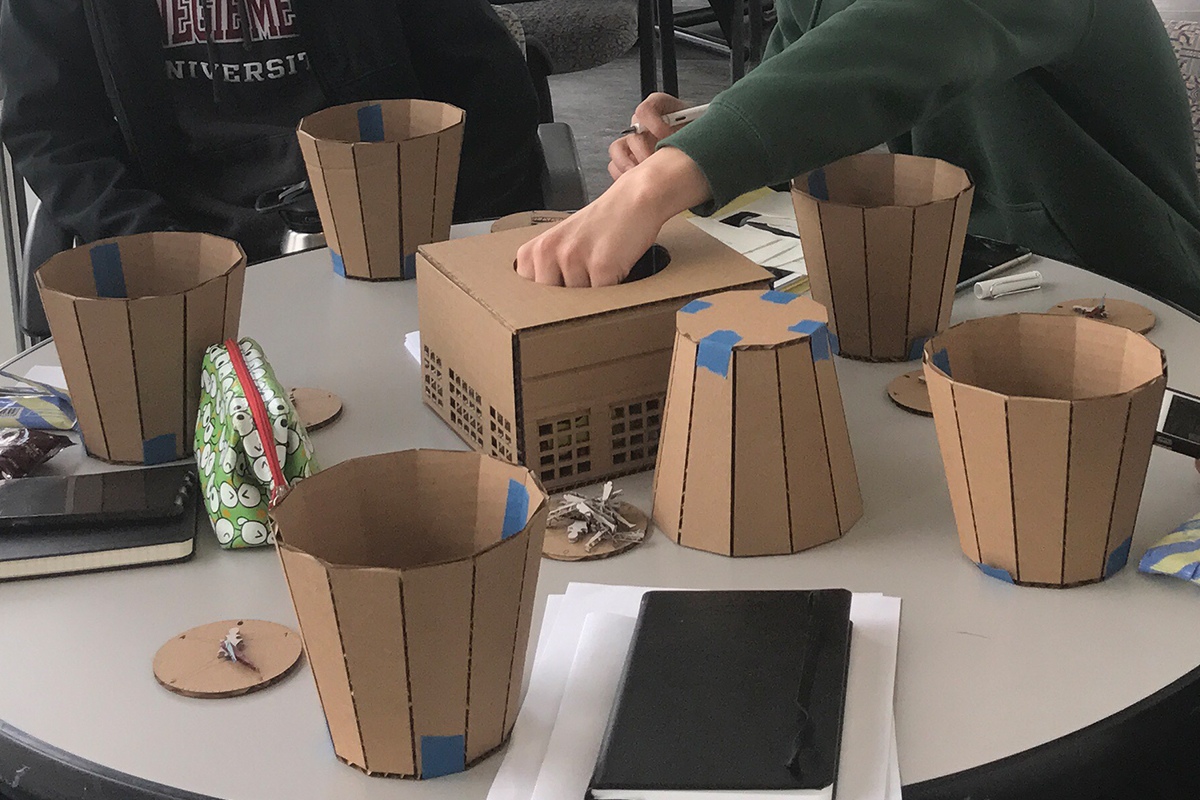 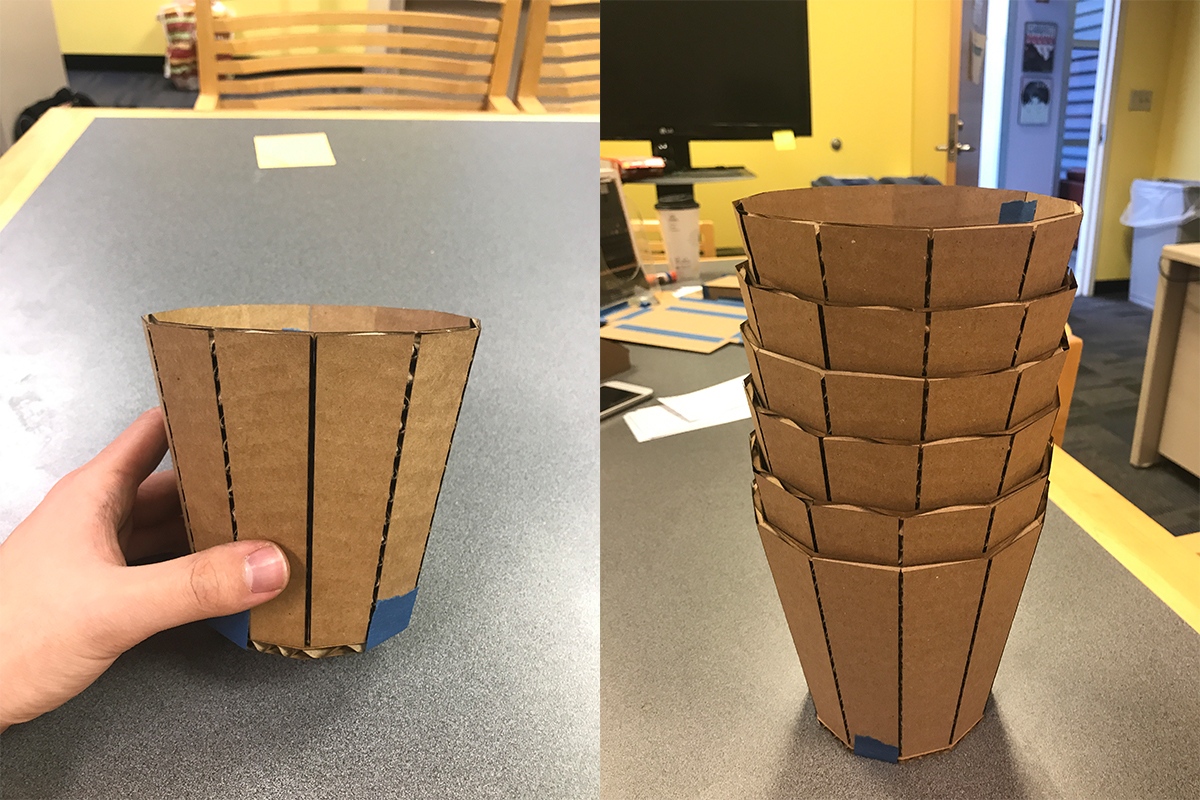 -Initially, I made paper cards with words written on it. This allowed the team to rapidly iterate on the game design in the initial design phase. However, having just words made the cards less legible.

-I added icons and titles for the cards to make the message more immediate and obvious. I wanted to get this carved-out look for the cards, so I imprinted the icons and the text onto the cards using a laser-cutter. 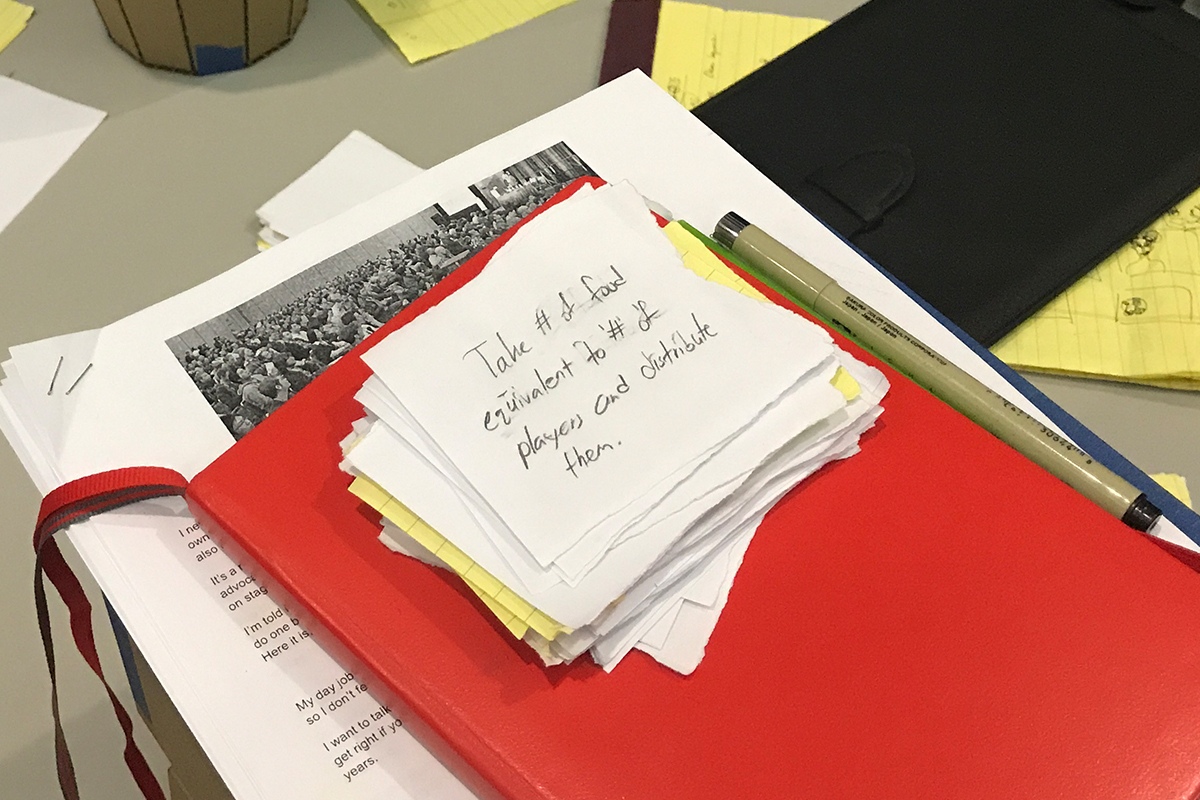 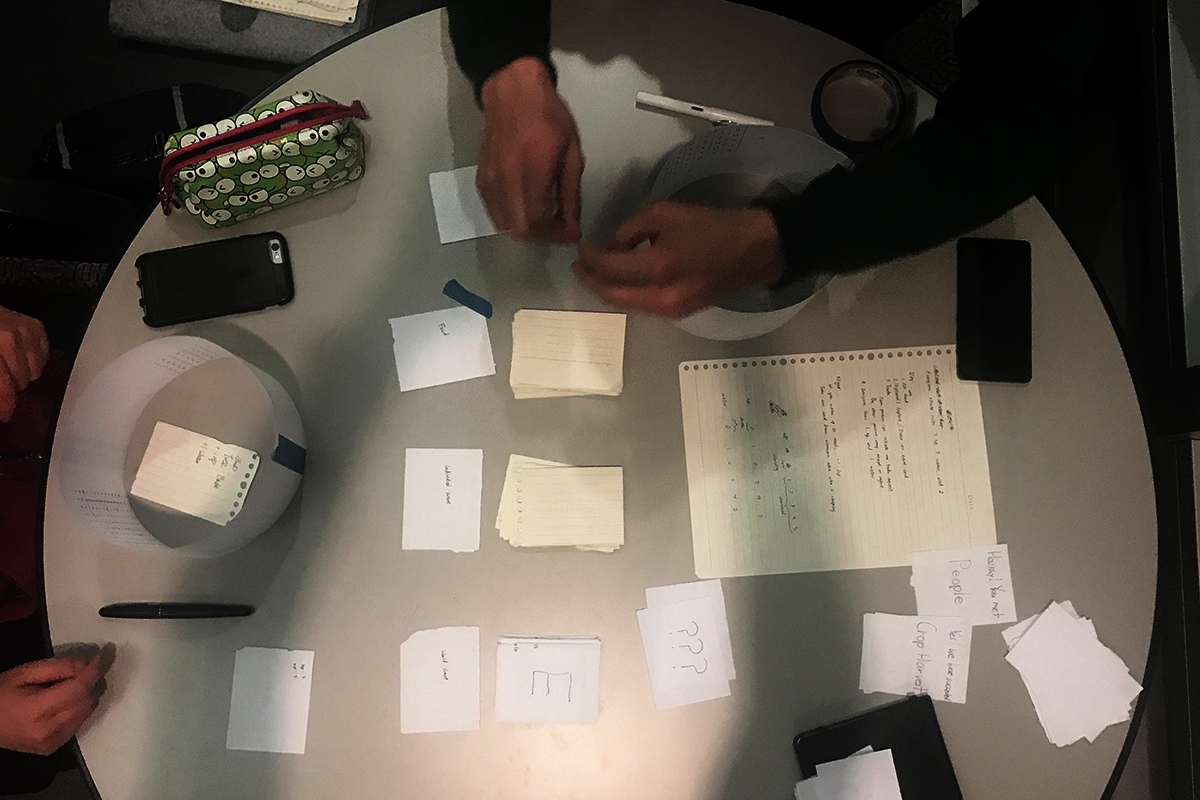 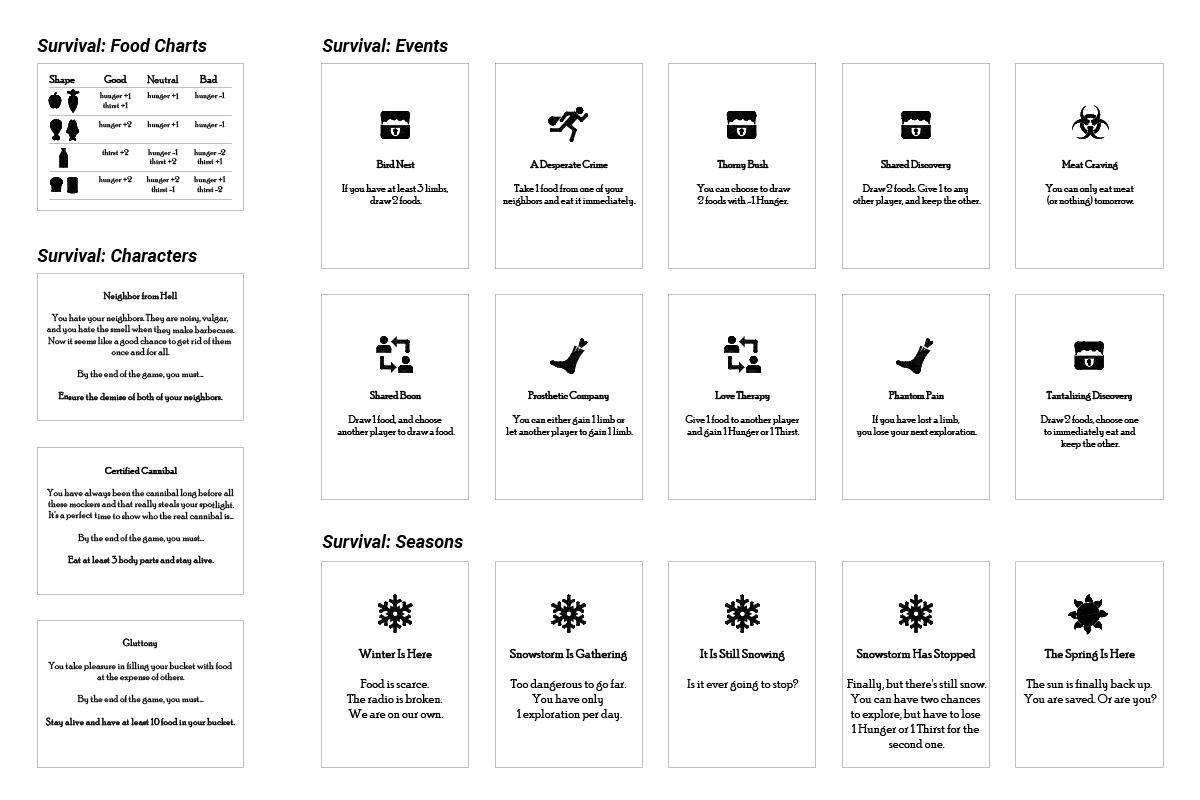 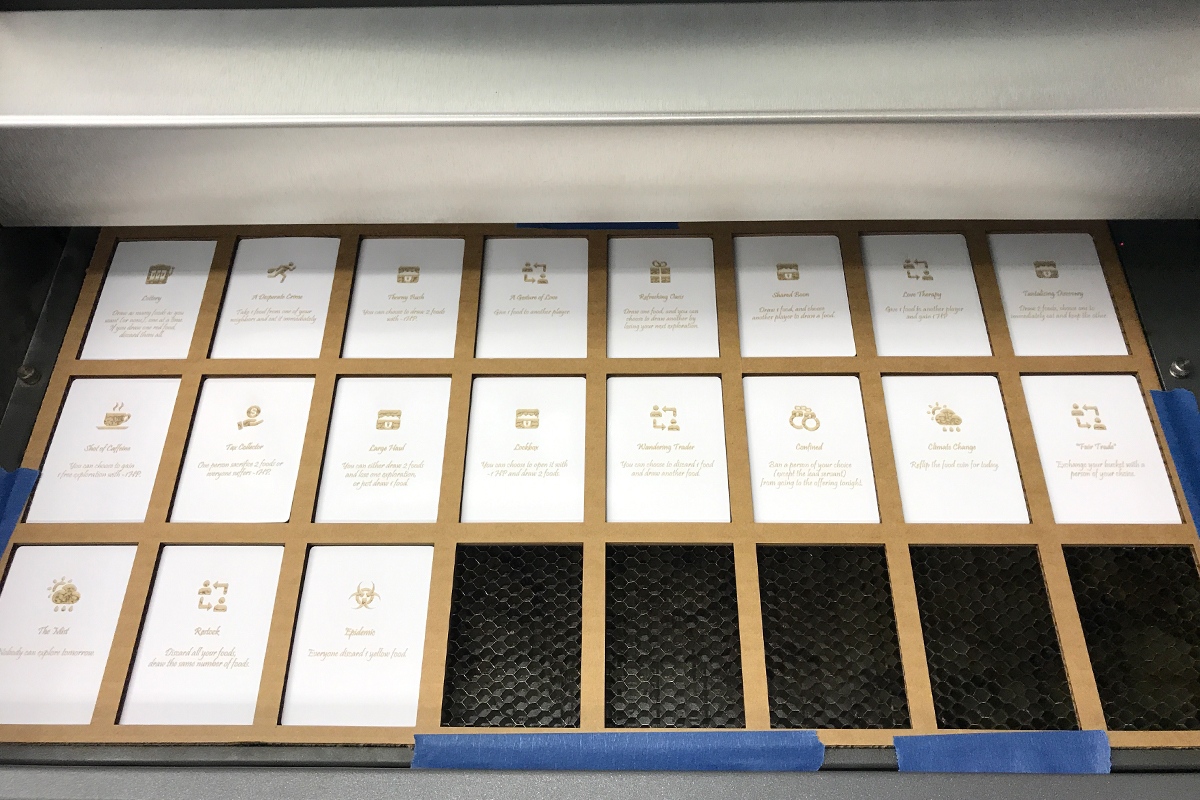 -The Player have two stats that they need to keep track of: 1) Hunger, and 2) Thirst.

-Initially, the players manually kept tally on their stats. However, this added work to the players and made each turn longer.

-Inspired by the Vitruvian man diagram, I wanted to convey the immediacy of the player’s health using the image of a human body. In the game, it is possible to cannibalize in dire situations, so the limbs are detachable as emergency food tokens. However, when all limbs are gone, the player dies and loses the game. The two stats, hunger and thirst, are respectively represented as dials so that the players can easily change the values.

-The cardboard turned out to be too fragile and malleable, and since players interacted frequently with the health bar, I remade it out of rigid acrylic material. 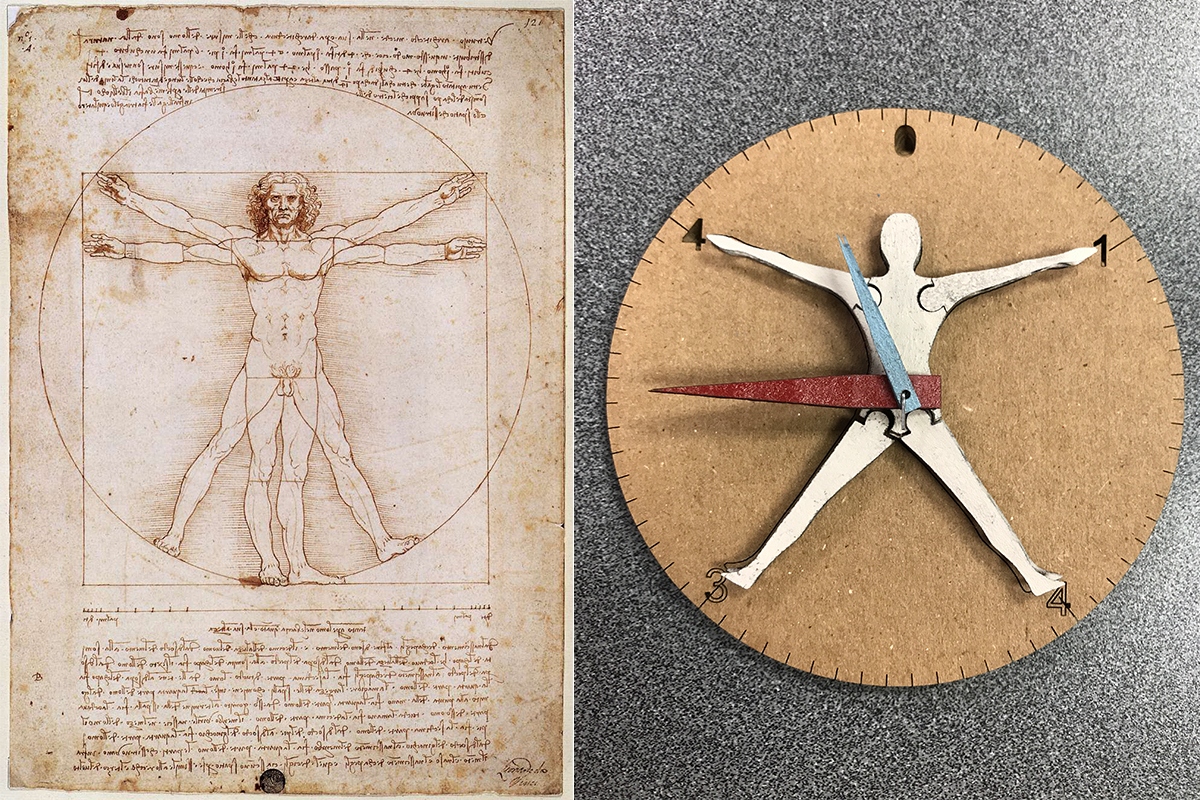 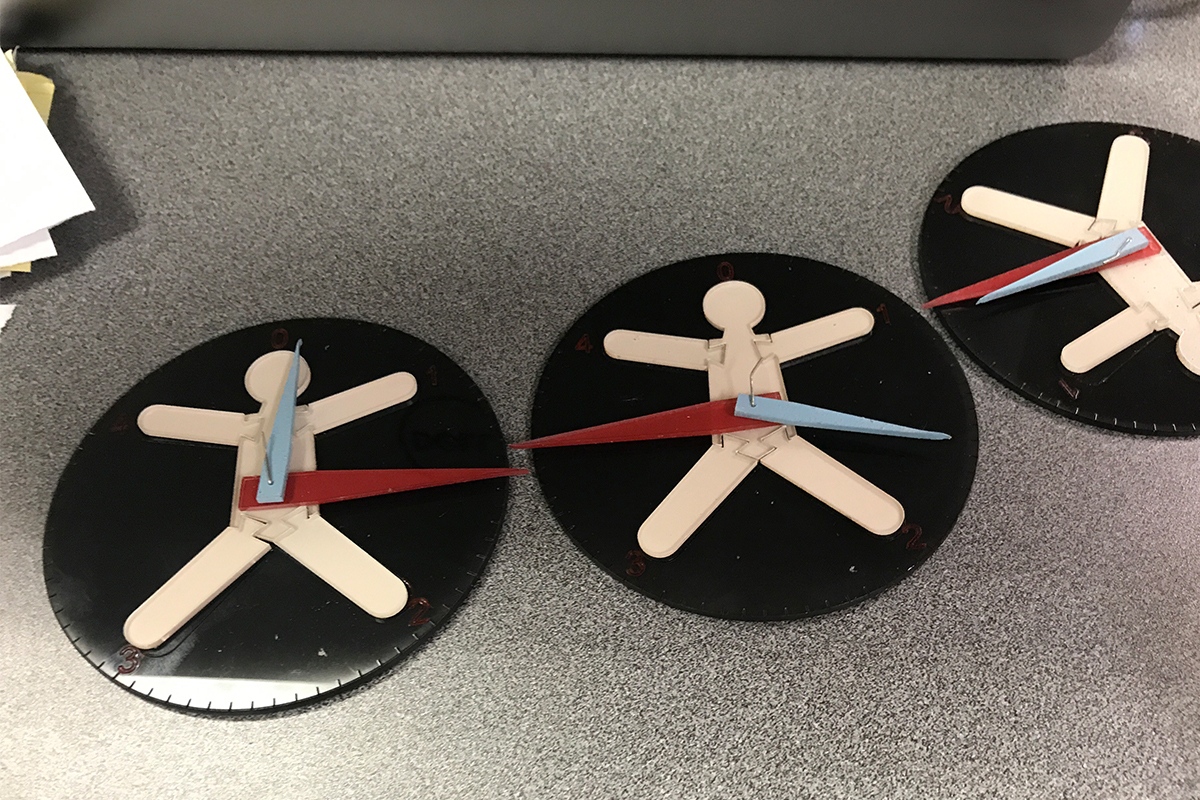 Since the game is designed to be played by 4 to 6 players, it was important to host external playtest sessions throughout product development. In the early design phase, we scrapped together paper prototypes to confirm the big design decisions, such as the core gameplay loops, game mechanics, turn actions, and player dynamics.

As we iterated on the product, we focused more on the finer details of user experience, such as usability, system design, and toy design. There was a lot of balancing work on the character roles and food system to strike the fine balance between fun and tension, between survival and death, between win and lose.

When we had most of the game and product design in place, we conducted entire playthroughs with testers to measure the overall game experience from start to finish. It is here we discovered the potential to offer two different game modes based on the same systems. Also, we conducted recurring sessions with the same groups of people to measure the game’s replayability. 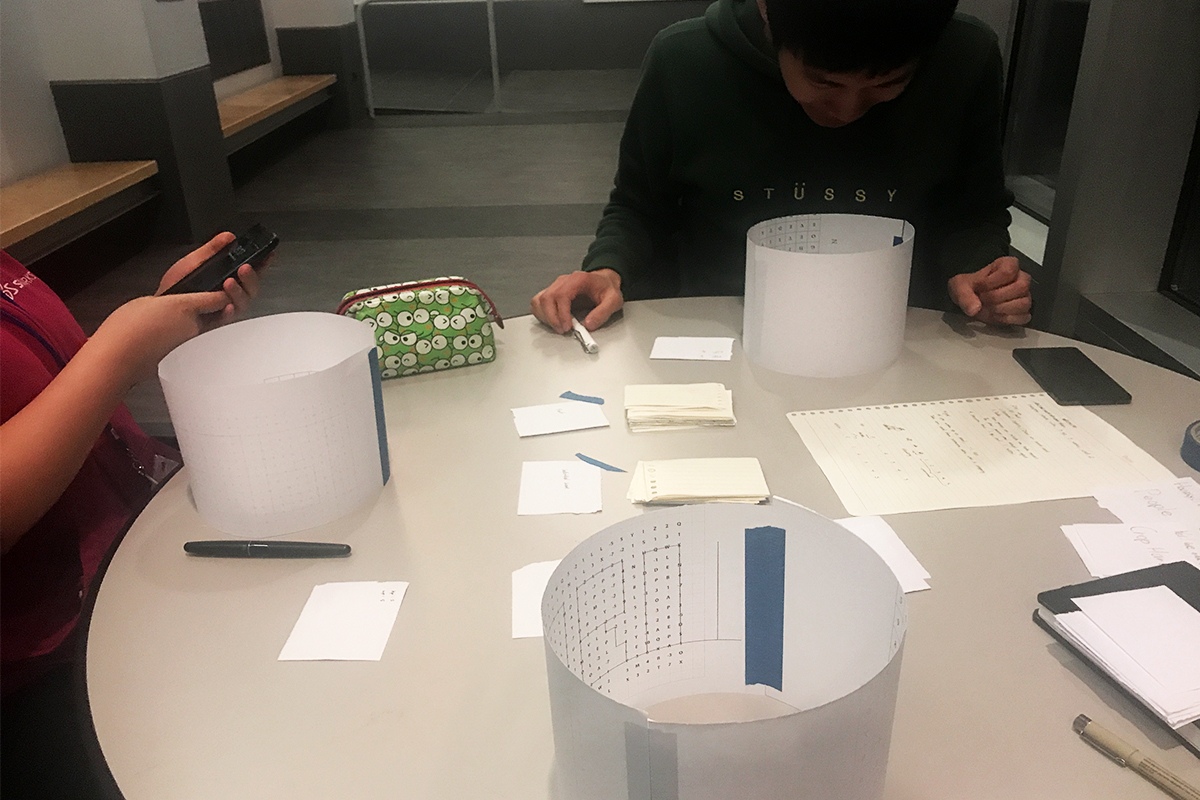 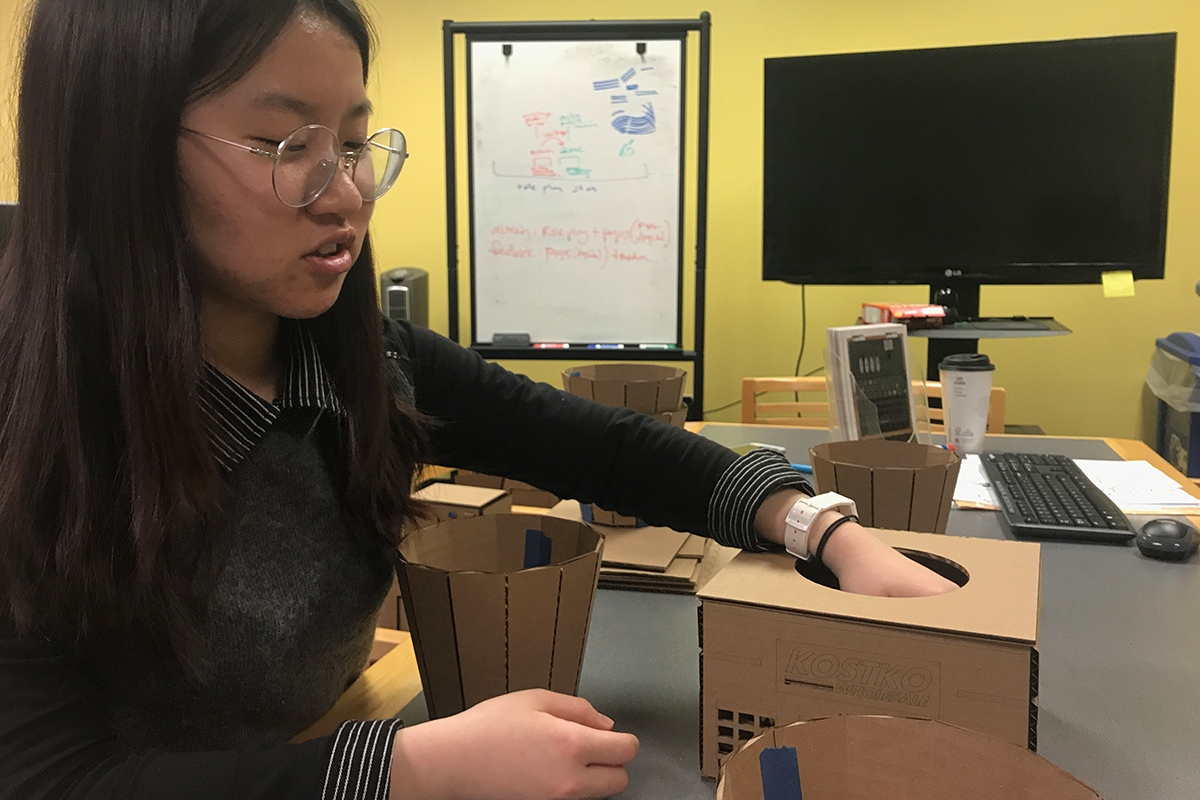 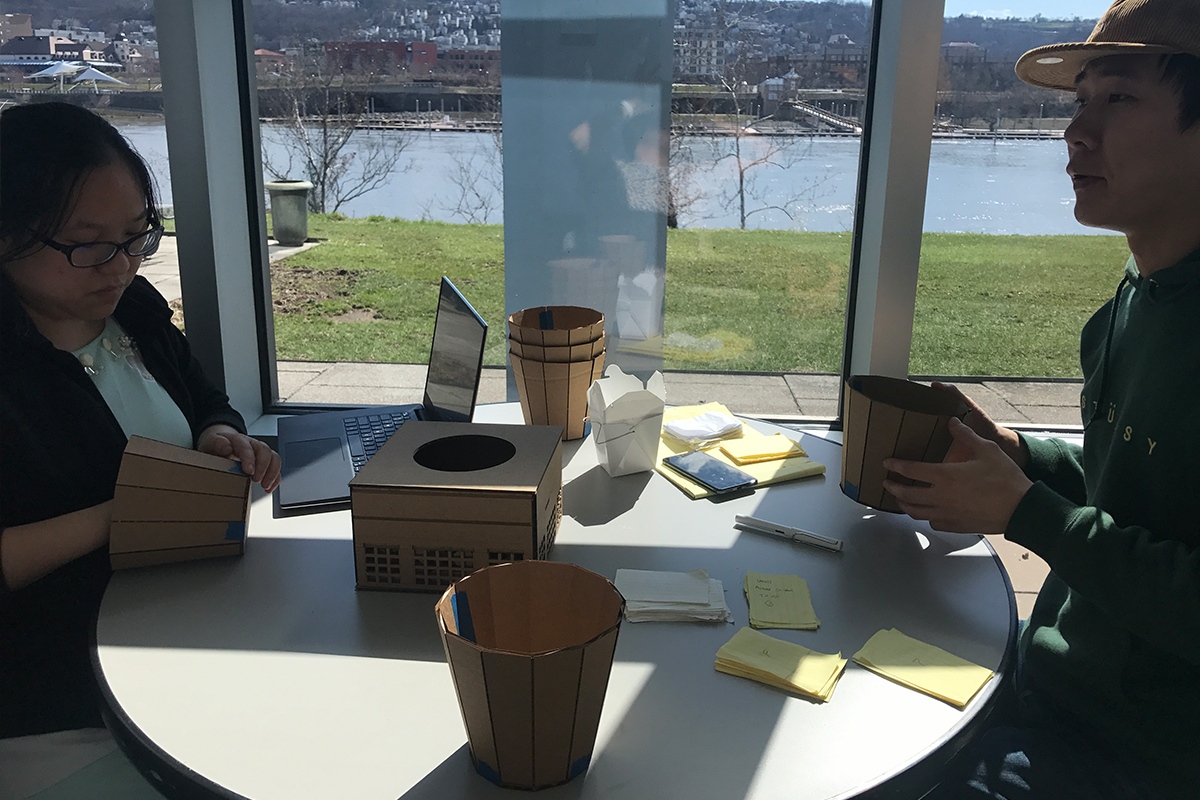 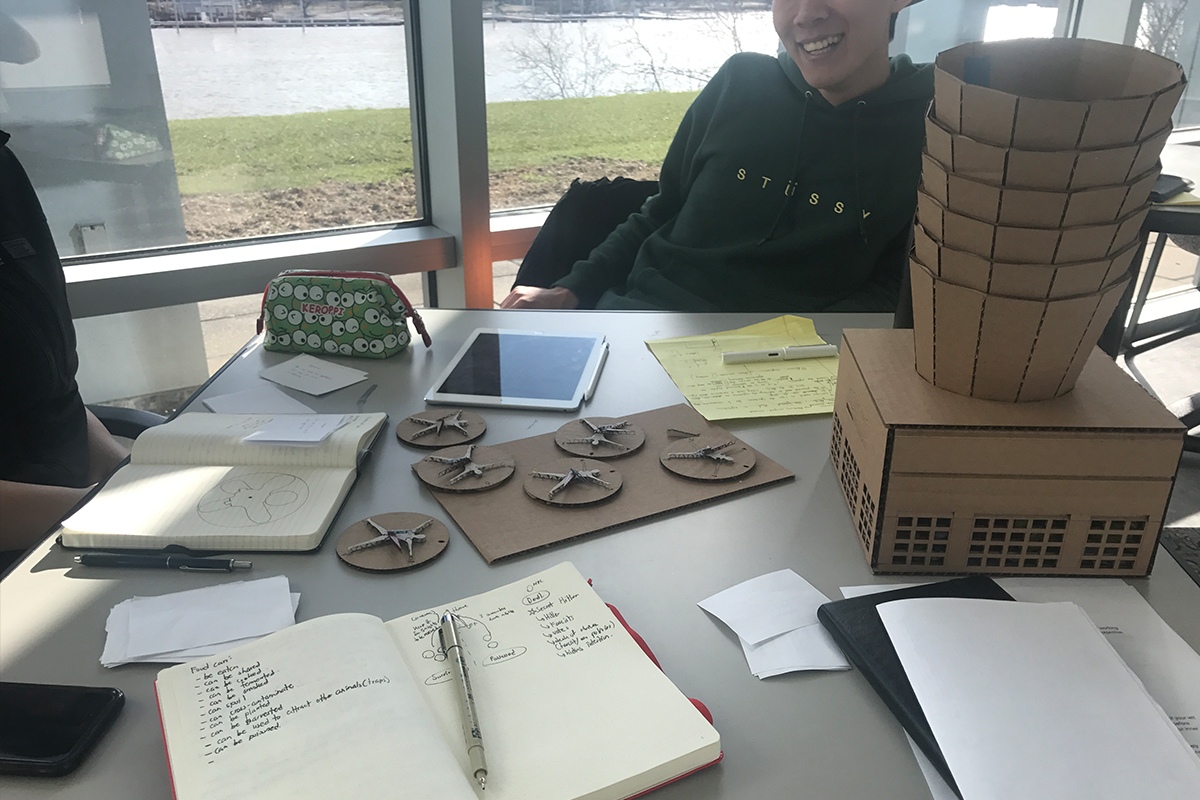 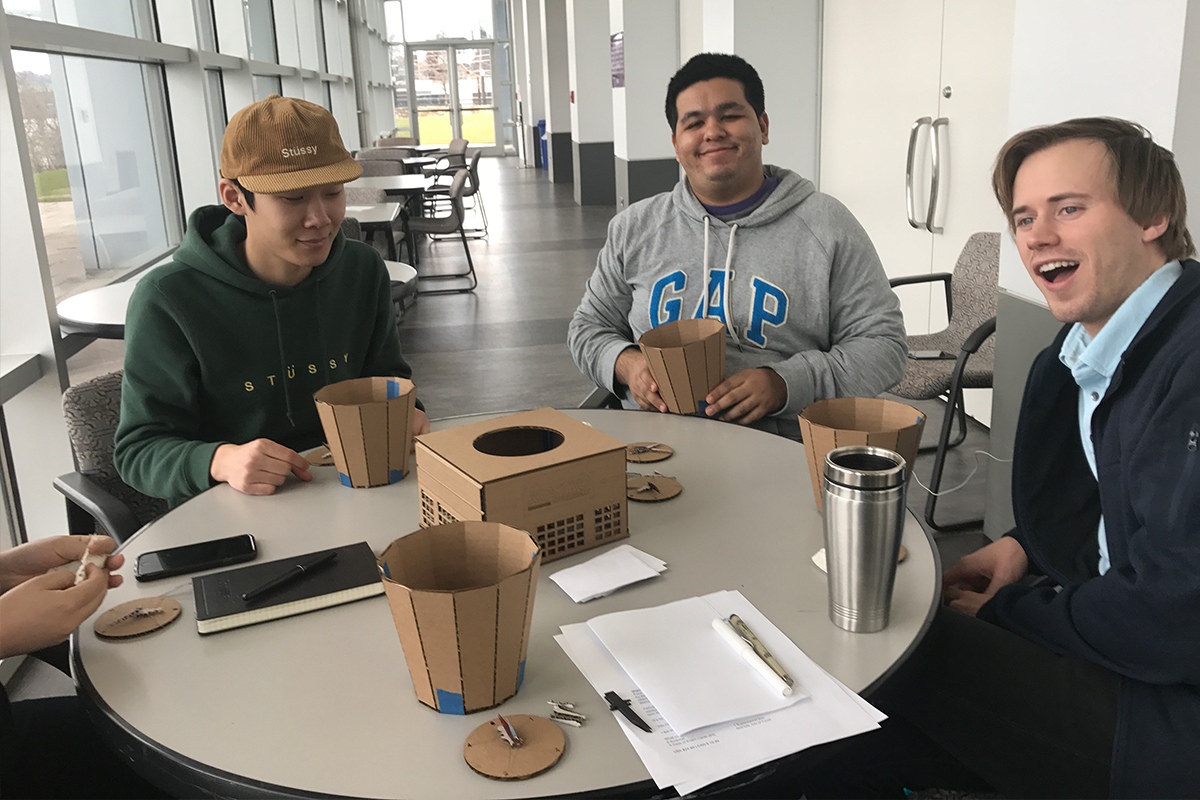 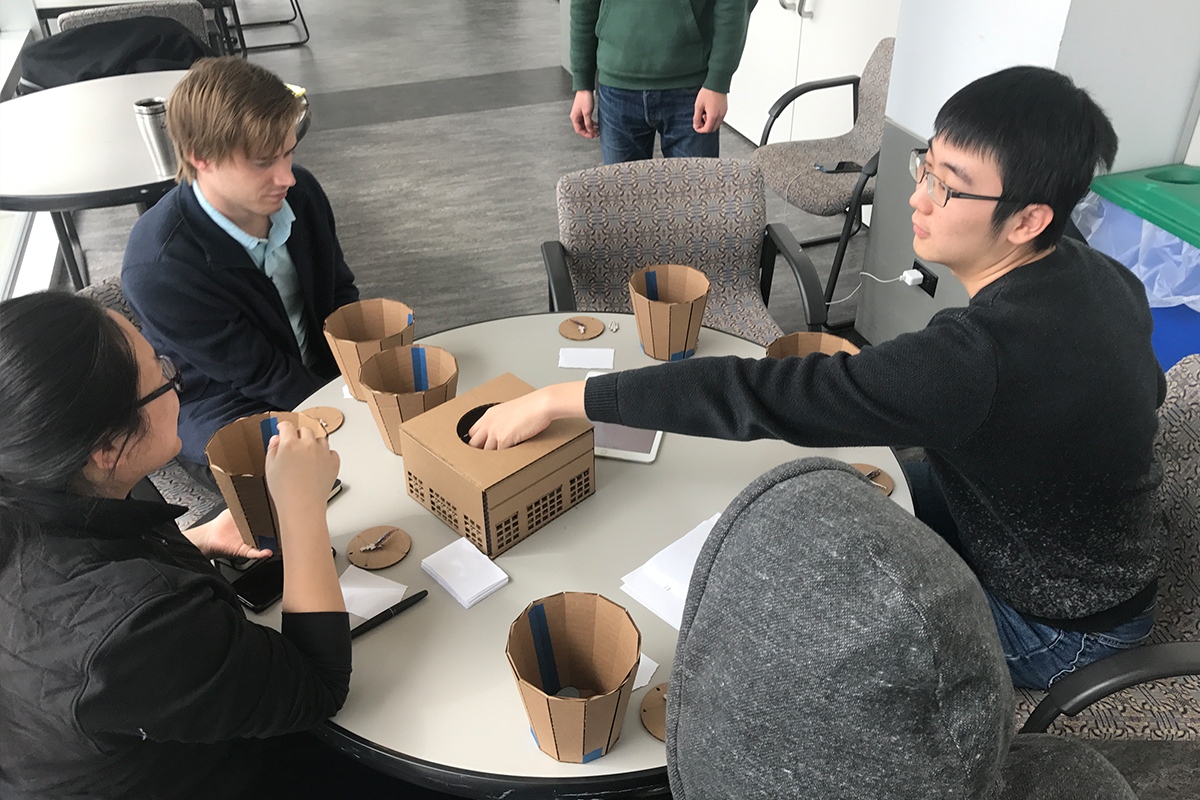 Since the game included a lot of physical elements, the packaging had to maximize the use of space to be as compact as possible. The market box, the biggest element, was designed to be the packaging box itself, and the buckets were flattened out into templates that can be punched out and assembled by the players. Likewise, the food tokens were laid out in flat sheets that the players can punch out, turning unpackaging into an engaging experience. 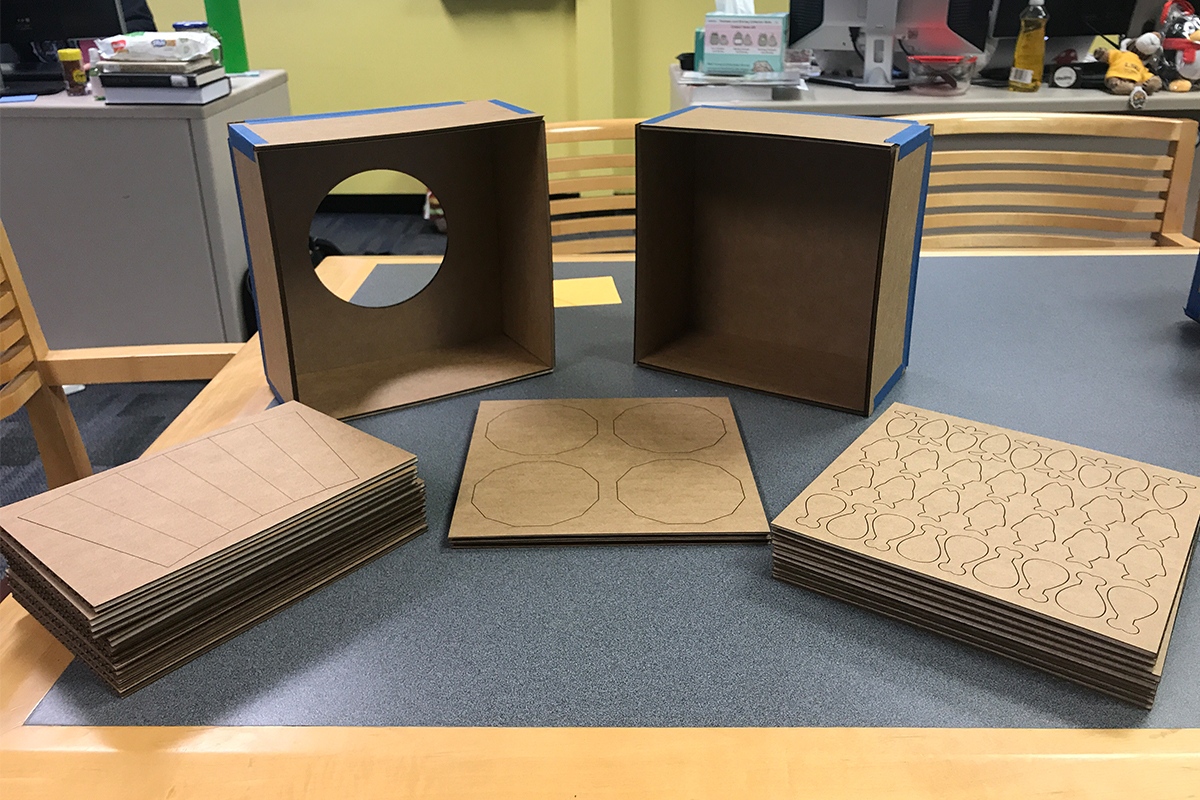 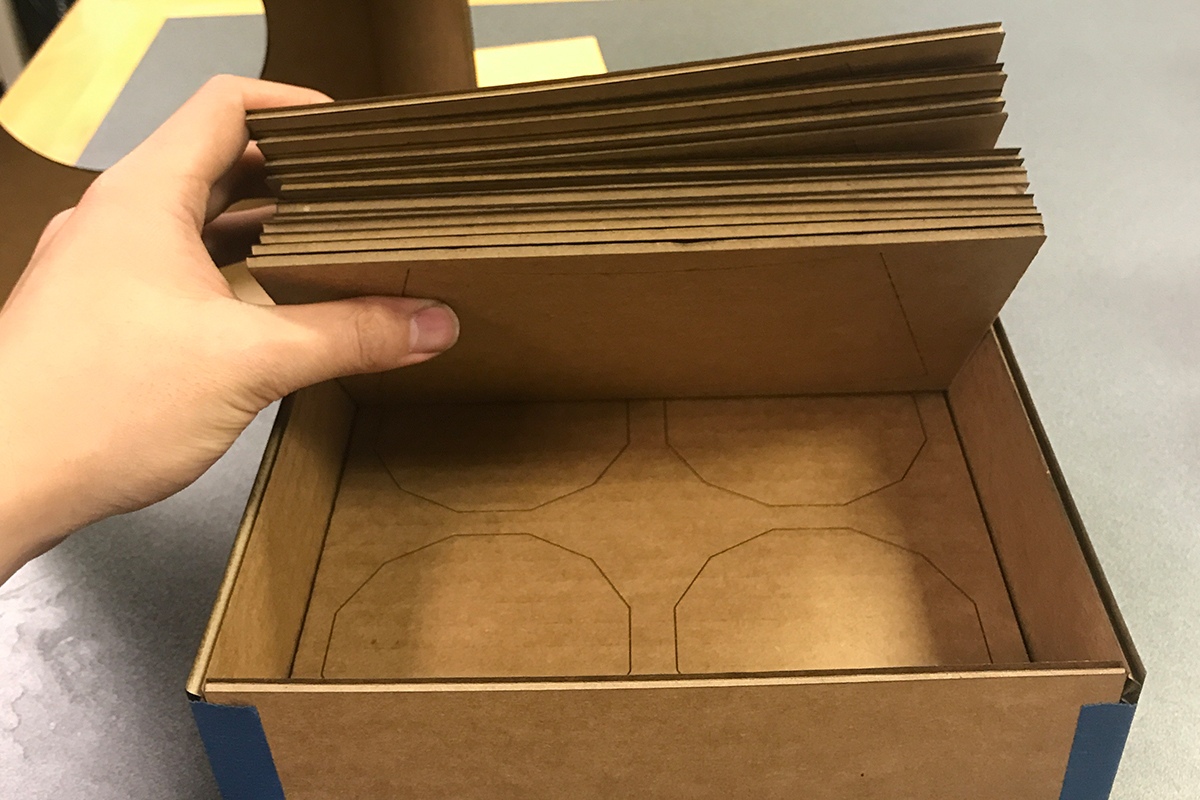 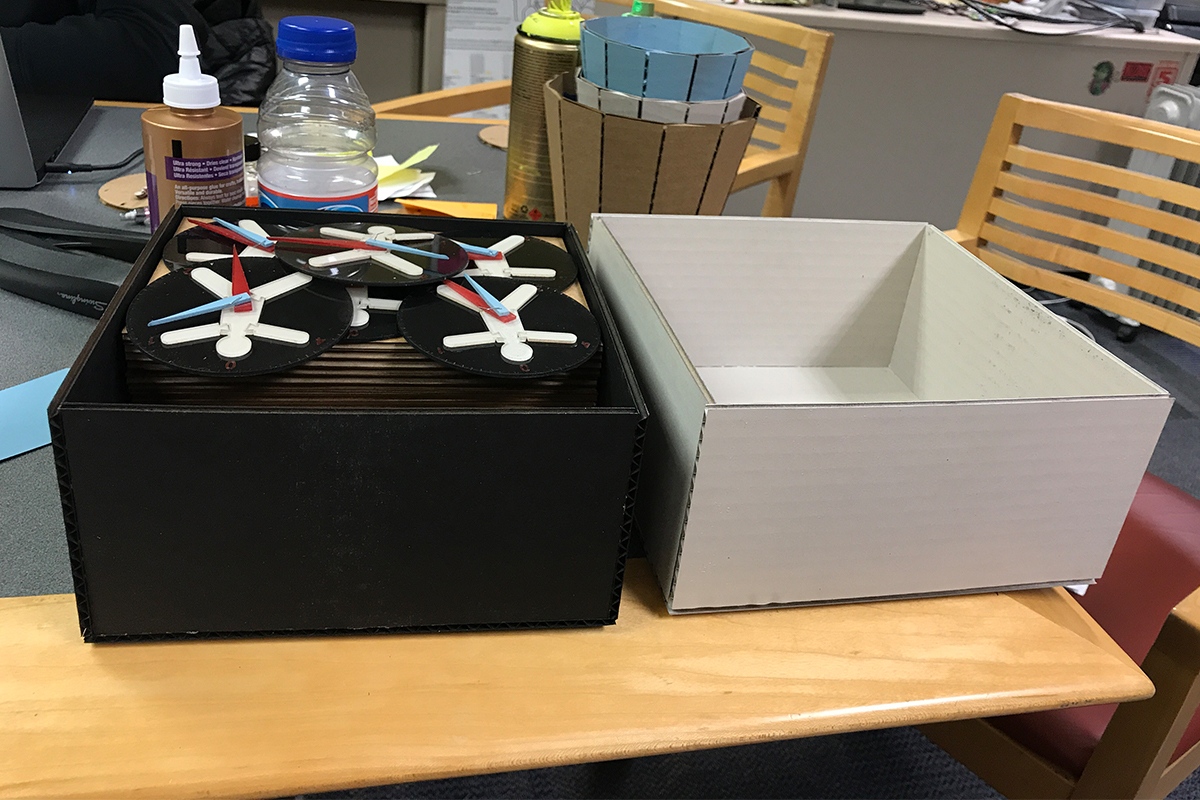 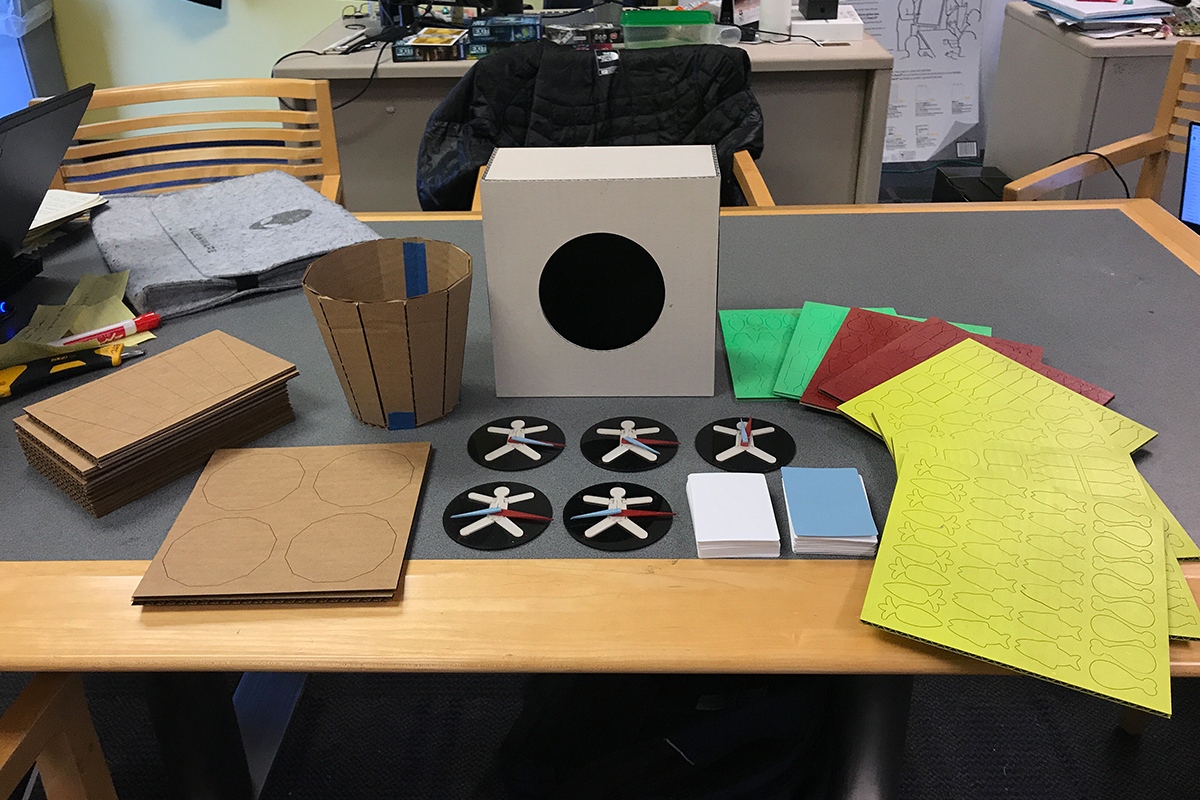