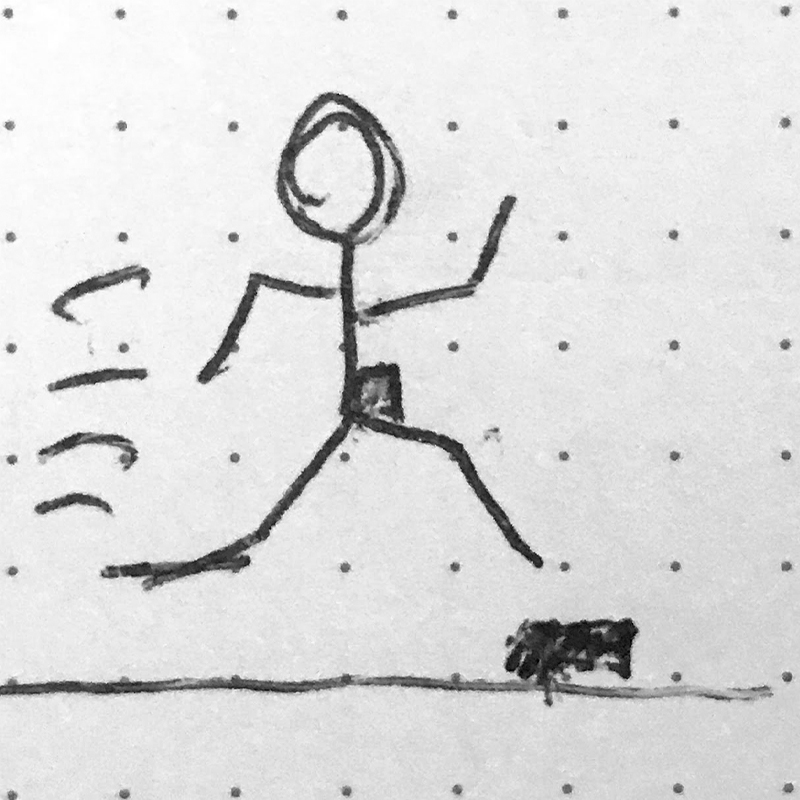 In the first week of Game Design class at CMU, taught by the infamous Jesse Schell, we were asked to design and prototype a game based on the ubiquitous Hopskotch.

We were first asked to observe the game, evaluate its strengths and shortfalls, and pick a specific design problem to address in the assignment.

There are multiple variables that gives the game of hopscotch such universal appeal. The most obvious is its convenience of accessibility, requiring minimal physical hardware: a floor, a random object, and something to mark the lines with. The gameplay mechanics and the rules that govern them are simple enough for even a kindergarten child to intuitively understand. More specifically in terms of mechanics, the physical dynamism in throwing and hopping across the boxes gives the fun factor in the gameplay. One could even presume that the mechanic connects deeply with the players in that it taps on human’s innate attraction to childlike play. On top of that, despite its simplicity, there is a lot of room for improvement and mastery in this core mechanic, partly due to the sense of competition as one of the motivating factors.

B) The Shortfalls and the Problem Statement.

Despite its many appealing attributes, the game of Hopscotch has its own set of shortcomings. First off, in spite of its minimal gameplay rules and simple mechanics that account for its popularity across all age groups, it runs the risk of being too easy for advanced players to master. This may be due to the disparity in cognitive capability between age groups, and it is a hard problem to address. On top of that, given the repetitive nature of the gameplay, the replayability of the game becomes questionable; it may become dull for advanced players after a couple rounds. Furthermore, although hopscotch is a social game, it only permits one player at a time on the play field, hence runs the risk of boring the other players if they were to idle for a prolonged period. Last but not least, the game itself does not have a background narrative behind it, hence rendering the mechanics to have no real meaning beyond a mastery of skills. This is not necessarily wrong, however an engaging story may immerse the players even more.

C) Hmm, in what ways could I address the Problem?

Here are 50 optional ideas I came up with:

We were then asked to choose 3 ideas from the list above that we think are most promising, and further elaborate on them.

Here are the ones I picked:

Out of the 3 above, we were asked to choose the ONE to fully focus on developing the idea, starting with a complete ruleset through rapid iteration process.

A) First, the Ruleset.

A multiplayer competitive hopscotch where each player is provided a fixed ammunition of coloured patches which they throw to create one’s own stepping path from the starting point to the destination. Hence these anchoring points are positioned on the opposite sides of a single rectangular “play arena,” the area in which the players can craft their paths. Players may either stand on one leg or two, and the patches may be picked up and reused. The size of the arena depends on the number of players playing. The players are penalized to freeze in place for 5 seconds if 1) they fail to hop onto their patches 2) they collide with an another player 3) they are hit by an another player with a patch. A player is only completely disqualified from the game if he/she steps outside the boundary of the play arena. Each player is sequentially ranked in the order he/she reaches the destination.

Given the limited indoor space of the RPIS, I was able to outline a zone big enough for maximum three players. Fortunately, three of my willing classmates from the game design course volunteered to playtest the game, each with a distinct physique and play style. Right from the beginning, I noticed a difference in the way they approached the game and devised their own unique strategy. First, I noticed that the Player One (Jacob) immediately deployed the intended mechanic of picking the patches up after himself and reusing them successively. Given the limited number of patches, this strategy allowed him enough patches at every point of the progress to set both of his feet down. As for Player Two (Rajat), I noticed that he was mainly concerned with laying out patches one at a time and hopping on one feet, without bothering to pick up the patches behind him. This initially gave him a fast start, however due to the instability of balancing on one leg eventually led to him mislanding numerous times and hence ultimately delaying his progress. Most surprisingly, Player Three (Ketul) had not even stepped into the play arena by the time Player One reached the destination. What turns out was that he was busy “planning” out his route before hand, and therefore concentrated on throwing the patches into the correct places. And most importantly, despite Player One’s short-lived attempt in the very beginning, I observed that none of the players were very much concerned with throwing the patches at one another. They were more concerned with their own progress.

*Illustrative sketch of the throwing/hopping mechanic.

C) Then analyze the Goods and the Bads

From the First Playtest, I was able to withdraw certain conclusions about the game design choices I’ve made. For one, the idea of having an “open” play area definitely allowed for more variability in terms of player’s movement and pacing, creating a unique experience for each player. Also, the players immediately caught onto the core mechanic of setting down the “stepping stones,” and devised their own strategy in using the limited resources given to them. And most importantly, players found it fun and engaging – competition brings out the best in people.

On the downside, there is a number of shortcomings that need to be addressed. For one, there was a division between the players who thought to reuse their patches versus the ones that did not. Upon further scrutiny, this may be due to the overall size of the play arena being too small, primarily lengthwise. As in the case of Player Two, this allows players to complete their path in a single pass with the given number of patches. Also, the reason why players were not using their patches as weapons may be due to the two possible scenarios: 1) the players could not clearly distinguish between the weapon and stepping patches in the heat of the action, 2) the player had more incentive to use their patches to progress their path rather than to attempt to hamper the progress of others. Also, the lightness of the patches made it difficult for players to aim and throw, and even if they managed to hit their target, the player hit did not receive a clear feedback as to when he/she was hit.

D) Don’t get attached. Revise the game, then Playtest again.

Based on the analysis above, I have made the following adjustments to the game design:

Then, I conducted a second playtest to test the ramifications of the design changes above. This time, for the sake of encountering diverse target audience, I gathered up three different people who are not enrolled in the game design course, as I thought this may lead to more revelations about the game.

Right off the start, I noticed that increasing the length of the play arena allowed for a more adequate duration of gameplay, hence forming a more gradual interest curve as contrary to the short-lived version in the first playtest. Also, the player was able to clearly understand and deploy the core game mechanics of throwing and hopping, as well as the idea of picking up the patches on the ground and reusing them to continue their path. Most importantly, the majority of the players (2 out of 3) was actively deploying the weapon mechanic to hamper one another throughout the entire duration of the game.

Of course, I also observed some flaws with the game. For one, all players respectively held the two different patches in different hands. I would presume that having two very functionally and visually distinct patches have elicited this behaviour. While this may sound good in writing, one of the players kept constantly mistaking the type of patch they are holding and sometimes threw one in place of the other (ex. throwing weapon patches for stepping). Also, all players held the stepping patches in their dominant hands and the weapon patches in their secondary hands, which allowed a better aim for laying out the path but not for hitting their desired target. This issue is also compounded with the fact that the players had a harder time throwing in the direction opposite of the swinging hand.

Another issue was that one player did not realize the shortage of patches until they completely ran out at the end of the path. Hence they had to run back to the beginning of their path to retrieve the patches, which significantly delayed their progress not only because of the time taken to retrace their way back but also because they exposed themselves for more attacks.

F) So… did the game address the problem statement?

In my opinion, based on the observation and analysis from playtesting, I believe the game ultimately satisfied the majority of the problems outlined in the initial statement. This is because 1) the game incorporates multiple players to play simultaneously and interact with one another 2) the complexity and simultaneity of the aiming+hopping mechanics make it difficult for one to easily master them 3) the variability of scenarios resulting from an open play area and multiplayer interaction increases the replayability of the game. The one problem I was not able to address was the lack of engaging narrative behind the gameplay experience, which I intend to further incorporate into the development of this version of Hopscotch.