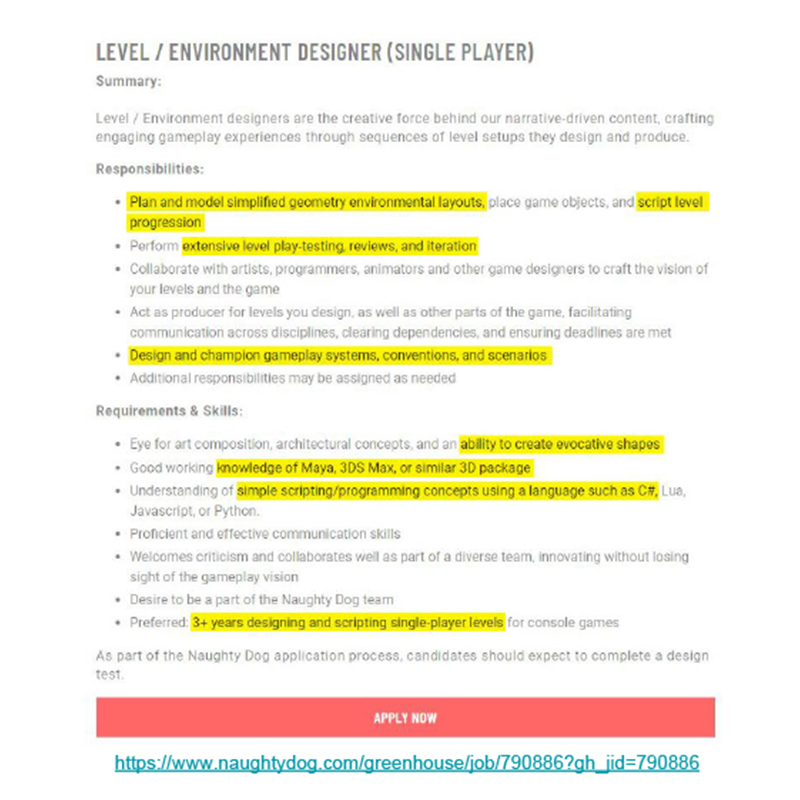 How to become a Level Designer

The following is a presentation I gave for my Independent Study course at the Entertainment Technology Center during the Fall 2018 semester. After being fed up with the lack of formal resources and guides to what it takes to do Level Design in the video game industry, I took up the challenge of designing one myself with a course titled “Level Design for AAA Games.”

You can find the original slides HERE

Hello everyone! My name is Howard and today I am going to talk about doing Level Design for AAA Games, which is what I’ve been up to for my Independent Study this Fall semester. The course advisor is Dave Culyba.

To give you a brief introduction of myself, I was formerly an architect before I came here to the ETC. I loved designing buildings and environments, so that’s why I settled on a career goal to become a level designer at a AAA game company.

Having the design experience in my pocket, I thought it wouldn’t be that difficult to get a job in the video game industry. Boy, was I wrong. I got one rejection letter after another. One at Creative Assembly, Cryptic Studios, Crytek, Hangar 13, Schell Games, Ubisoft, and even Zynga!!! You name it.

I was shocked. So I took some time to reflect on why this was happening. I read blogs, articles, watched GDC talks, and reached out to the industry professionals on LinkedIn. From this, I came to two conclusions. First, I was missing the design and the technical skills that was expected of a level designer. Second, I was lacking a portfolio of level design work directly tangible to the studios I was applying to.

So I realized I needed to set a shorter term goal, which is to learn and practice level design skills by creating game levels based on existing AAA franchises.

As a start, I looked through a typical job description of a level designer role, this one being at Naughty Dog. I then highlighted the major responsibilities and skills required for the role.

From this, I made a short list of everything I needed to work on throughout the Independent Study. First is planning and modelling simplified geometry and environmental layouts, with a focus on evocative shapes, artistic composition, and use of level editors. Second is scripting basic gameplay mechanics and trigger events using scripting languages like C#. Third is iterating the level through play-testing and documenting bug lists.

I then summarized all this into a course syllabus to act as the guideline for the semester. Now, let’s talk more specifically about the levels themselves!

Relating back to the Naughty Dog job posting we saw earlier, I figured I’d base my first level on their much-acclaimed title The Last of Us.

In a typical game studio, a level designer is usually handed a level brief by the lead designer that specifies the context, the requirements, and the goals of the level. So I devised one of my own to define the needs of the level and against which the level’s success can be measured.

Once the brief was fairly well defined, I started by using Google Maps as a surveying tool. Since the original game takes place in Pittsburgh, I figured I would go site hunting through the city. In the end, I chose the Monongahela Incline area near the Station Square district. Using the Map’s top-down view and the street views, I found a set of interesting places. This physical reality acted as the base reference for the level, for both its layout and the art style and theming.

I then translated this physical reality into a sketch of the level. During this process, I kept the core elements of the area that gave the level character while addressing the needs of the game. This included major landmarks, building layouts, architectural scale and style, and the natural topography of Mount Washington.

The next step was to take the 2D sketch into the 3D gamespace through a process called blockmeshing. The goal here was to test out the general scale and layout of the level in relation to the intended gameplay mechanics, metrics, and pacing. Using the Unreal engine and yjr built-in Mesh editing tools, I blocked out the overall terrain, exterior spaces, landmarks, building interiors, roads, and paths. During this phase, the level was constantly compared against the brief and went through several iterations.

Here are some in-editor screenshots of the level. Here, you can see the side-by-side comparisons between the virtual scenes and their real-life counterparts.

Here’s a quick walkthrough video of the level. It’s important as a practice to play through the level as often as one can. During this exercise, I familiarized myself with modelling level geometry in the engine, and also briefly touched on the Unreal’s Blueprint scripting system. However, it was difficult for someone just starting out to implement the basic gameplay mechanics equivalent of a AAA franchise. Hence, I decided that it was better to borrow existing assets from the asset store instead. However, Unreal engine had a fairly limited marketplace. So, I decided to switch over to the Unity engine for the next level.

The second level was focused on incorporating combat mechanics into the level. Now using the Unity engine and combat systems from the asset store, I set out to design a set of cover-based combat levels that are the hallmark of AAA action adventure games like the Last of Us.

I decided to base the level in imaginary settings. It is industry practice to gather reference images as part of the planning process. So I did, using search engines like Google Images and Pinterest. In total, I collected about 40 images of different yacht interiors and exteriors, and ship dockyards.This gave me a good idea of what the level was going to look like.

Using the set of principles in designing combat spaces outlined by Emilia Schatz, the lead designer on the Last of Us Part II, I sketched a top-down layout of the level using Adobe Illustrator. I first designed the rooms – their sizes relative to one another, and the connections between them using porous boundaries like door openings. I then defined the Enemy and Player Territories, the No Man’s Land in-between, and the flanking routes that connected them. I then determined the cover placements, enemy spawn points and patrol paths.

For the level to be built out in 3D, I wanted to design a level with a larger, more complex interior layout and with more enemies. Using a similar design process, I first made a collection of reference images related to hotel atrium interiors.

I then made a 2D sketch of the level layout with the gameplay goals in mind.

Up until now, I have explored and practiced two core aspects of the action adventure games – one focused on environments and traversal, the other focused on how combat and player metrics inform the level design. With the third project, I wanted to incorporate both. I figured that designing an optional tomb for the Rise of the Tomb Raider was a good fit for this purpose.

As the setting was entirely fictional, a lot more research and planning was required. I gathered image references of salt mines: the exterior camps, the mine interiors, and the various cultures within them. I also researched mythology tales and legends to come up with the lore of the level.

For the planning process, now the narrative structure had to be mapped out in parallel with the gameplay beats and pacing.  Borrowing from Pete Ellis, a level designer at Guerilla Games, the Level Timeline outlines all components of the level, including combat, traversal, and cutscenes. It is also organized in the “Three Act” narrative structure, composed of exposition, rising action and climax, and resolution. In this case there are four acts, but the idea remains the same. Overall, it is a good depiction of what a level sequence for a AAA game would looks like.

Each level is fairly self contained and can be designed in isolation. Beginning with the First Act, I sketched out a top-down map of the mountain scene, but now with Keys indicating major gameplay-related elements, such as event triggers, pickups, and enemies. The map is also used to illustrate the player’s critical path versus the optional ones. Starting with the 2D sketch, I blocked out the level in 3D, as you can see in the screenshots to the right.

The Second Act level is more focused on combat and stealth gameplay, so the sketch shows the player’s optional paths, the enemy’s patrol paths, and the pickup placements.

To offset the combat intensity, the goal of the Third Act is to challenge the player with traversal and platforming puzzles and light combat, and to introduce story moments.

As an example, let’s look at how the Third Act level developed. This is the first blockmeshing pass of the level, with the basic level geometry modelled from start to finish to test out the proportion, scale, and shape of the environment.

In the second pass, I further adjusted the level geometry based on player’s line of sight, gameplay metrics, and spatial experience. Here the shapes became more evocative of the cave setting; irregular, organic, and natural forming.

Next was the “gameplay” pass, where I incorporated the player’s climbing mechanics, and scripted trigger events, enemy behaviours, patrol paths, and sounds. To articulate the intended atmosphere of the level, I also threw in lighting.

This is the main chapel during the blockmeshing pass.

…Then the gameplay and lighting pass.

Here is a walkthrough video through the level.

After going through these projects, here are 7 key learnings I’ve took away…

We all like a happy ending to a story. Recently, I received a positive response from an application I have made to a Design Internship position at Treyarch. I believe that the work I’ve done through the course is having some tangible effect. We’ll see what happens next, fingers crossed.

For those who are curious, here is a list of the key resources I have used for the Independent Study.

Thank you for listening to my presentation. As a treat, here is a link to my vault of game and level design resources. I have documented every useful videos, books, blogs, and articles I came across so far. I hope that this may prove useful to those like me who are aspiring to become a level designer at their dream company one day.