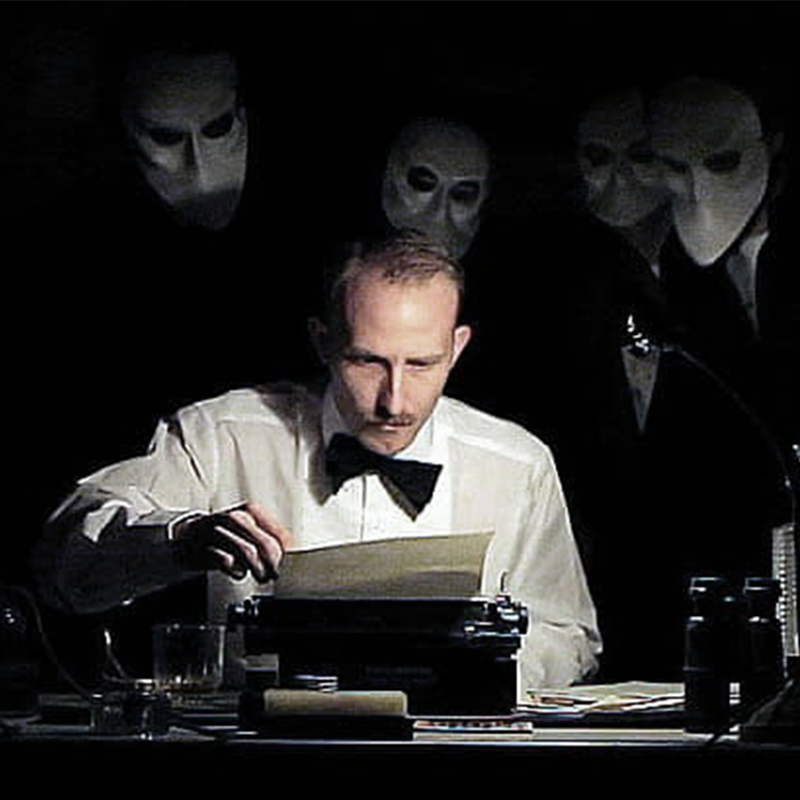 However, i think it is important for one to be aware of the distinct affordances that each medium offers, and consider how each can contribute to the interactive broadcasting model. While some traditional media such as film, movies, or tv shows may be suitable just for sparking discussions between the streamer and the audience, for video games on the other hand, mere commentary may be paying disservice to its single unique affordance: interactivity.

In this case, spectatorship becomes a double-edged sword, where the audience is drawn to the appeal of observing the streamer’s reactions to the game while at the same time standing outside the game’s magic circle. The current model of video game streaming seems to be contradictory in nature.

Fortunately, similar challenges have been tackled in other forms of media that seek to push the boundary of audience engagement, such as improvisational and sketch comedy shows, and immersive theatres, to name a few.

Improvisational acting shows capitalize on using impromptu story progression to maximize audience engagement. In the more traditional forms of storytelling, the narrative plots are often designed, scripted, and rehearsed prior to the final performance. However this runs the risk of dulling the element of surprise that the audience takes profound pleasure in: seeing how the actors react and deal with the unforeseen circumstances. Improv shows, such as the Upright Citizens Brigade, attempt to avoid this potential problem by allowing the stories to naturally emerge on the fly, hence giving rise to interesting roles, settings, and scenarios – an emergent spectatorship.

Going further, these shows also actively elicit participation from the audience. First, they are usually set in informal settings, without a formal stage to blur the boundary between the performers and the audience. People will often either be standing or sitting on the floor.

Throughout the show, the performer will ask for ideas from the audience – a random word or two that can be used as basic ingredients to craft a story. This simple exchange gives the audience a sense of personal entitlement to the idea and investment in the story that arises from it. In other cases, the performer will ask for a volunteer from the audience to take on a primary role in the story. Done quite often in magic shows, this is designed to invite the audience into the “magic circle” of the story, suspending any disbelief and buying into the story’s authenticity. As the volunteer becomes a representative of the audience, he/she becomes the center of attention. He/she is a vessel that immediately establishes a relationship between the actors and the spectators.

Another popular form of participatory storytelling is immersive theatre.

In contrary to the improv shows, immersive theatrical performances throw the conventional story structure out the window. In the case of Sleep No More, the performances are done in loops, with steady background music playing in each room. The “acts” of the story are non sequential; they are running concurrently.

Within its nonlinear structure, the audience is invited to freely wander around from scene to scene, from room to room, to encounter the individual events that unfold within them. This way, each member forms a unique story narrative through their individual imagination in making sense of the experience. To accentuate this feature, often the audience is given no programme at all, and direct verbal interactions with the actors are strictly prohibited.

Hence the audience becomes the main protagonist of the experience, freely following the actors around, engaging in private one-on-one encounters with them, and investigating the scenes by directly interacting with the objects.

Recently, the MIT Media Lab collaborated with Punchdrunk, the production company behind the immersive theatre, to experiment with interactive environments that respond to the audience’s actions. Using a remote control system, an external controller can monitor the audience’s behaviours and accordingly initiate changes in the environment to create momentary surprises. A hybrid of video game and live performance, this interactivity blurs the boundary between the actor and the audience, the player and the world.

Now, what if we reappropriated some of these ideas over to video game streaming? What would that really look like?

I guess the most important question is: how can the experience give players a similar sense of spectatorship in streaming but also give them the agency to actively participate and influence the game?

The current video game streaming model has two distinct layers of interaction: the interaction between the audience and the streamer (the streaming part), and the interaction between the streamer and the game (the gameplay part). In this model, streaming and gameplay are completely detached and exist as two separate experiences. While there have been multiple attempts at giving the audience the agency of choice, the vote-poll system does not feel that substantial as it feels more like a trivia question out of context with the gameplay experience. The audience has no role and presence in the game world. Yes, the audience is making a decision, but they are making a decision FOR the streamer, while they themselves have no presence within the game. Hence, the current model seems either too passive or too intrusive.

Borrowing the principles of audience participation mentioned above, a more effective model would be to explicitly invite the audience into the game world, give them the ability to adopt an identity in the world, take on unique perspectives and goals, and influence the game in meaningful ways. The audience’s set of actions would then ultimately influence the streamer’s experience, either explicitly or implicitly. Instead of breaking down the fourth wall, this model would be carving a door out of it to invite the guests into the game.

This leads to the introduction of APCs – Audience Playable Characters – into the game world. This would compile the two separate interaction layers into one, where the streamer is the main protagonist interacting with the game world that is partially acted out by the audience themselves. This meta gameplay allows the audience to observe the streamer’s behaviours actively influenced by their actions within the game.

So, what would such a game look like? In my opinion, I think the genre most befitting such gameplay would be narrative-based point-and-click, since it has the potential to elicit social interactions, create dramatic moments, and facilitate discussions between the streamer and the audience.

In terms of the story, the most obvious way would be create a plot that directly pits the two groups against each other. However, this clear-cut relationship leaves little room to create dramas and facilitate the variety of issues necessary for people to share opinions. In the worst cases, it could result in direct tensions between the streamer and audience, forming a negative relationship.

To address these narrative dead ends and stalemates, it seems more befitting to allow for various degrees of plot scenarios for the streamer, the main protagonist, to navigate. This story structure would require the APCs to act as the polar forces simultaneously pulling the streamer to their respective sides, almost like tug of war. This would allow the streamer to encounter various audiences and force him/her to make interesting choices.

Along this line of thought, it seems that the way the story is designed and structured is inseparable from the participatory form of gameplay. There is a cyclical relationship between the two. The ideal scenario would be a story that necessitates such third-party participation within the gameplay. For example, a story that is centered around dilemmas between various values, such as wealth, relationships, and morality, would create interesting roles for the audience to take and in turn present a wide range of interesting choices for the streamer.

Currently on the video game market, there are some relevant examples that could be of use as they deal with similar ideas but outside the context of streaming.

The first game is UnderTale. The game restarts itself every time the player dies, after which it readapts its behaviours towards the player based on his/her previous history. This gives the player a feeling that the world is “alive” and “responsive” to his/her actions, which in turn influences the player’s decision making process as he/she plays a mind game with the game itself.

Another game named Stanley Parable, similar to UnderTale, centers its gameplay around rebooting every time the player reaches one of its 20+ different endings. The outcome depends on the chain of actions that the player takes in each playthrough. The variations in the choices are further accentuated by live commentary from the game’s god-like narrator. In its bigger picture, the game measures the player’s progress towards the real “truth,” that is, the ending that is in direct opposition to the narrator’s explicit instructions.

While the above two focus on branching and nonlinear storytelling, the recently released game A Way Out incorporates a co-op gameplay between two prison inmates in their attempt to escape. The game requires cooperation and coordination between the two players to overcome obstacles and achieve their objectives. While this has been done many times, the uniqueness of the game is in that it utilizes a dynamic split screen display (ratios changing depending on the situation) to support the gameplay. This elegant solution reinforces the players’ feelings that they are collaborating within the same space while having distinct character roles.

Lastly, the game Presence is a student pitch project at the Entertainment Technology Center that explores non linear storytelling in VR. The film-noir experience provides the player the ability to alter the environment and hence orchestrate the chain of events the unfold in it. Similar to Sleep No More, this degree of agency reminds the player of their involvement within the story and the satisfaction that comes from such power. With its branching story structure, the game accommodates unique narratives in each playthrough.

This article originally started out as a simple brainstorming exercise to consider what video game streaming would look like in its ideal state. Taking this further, I am currently in the process of designing a prototype with the bare bones using this design approach.

I do acknowledge that there are many flaws in my argument and potential issues that may have gone unaddressed. For one, given that much of the streaming culture necessitates audience sustainability, the replayability of such a game is questionable. If replayability is an appeal (like in the Stanley Parable’s case), how many different ways can the game be played? What are the variations that are possible, and what should be limited to avoid overscoping? If there are multiple playthroughs possible, what would be the game duration each time? Can it be played in one sitting? Or is it done episodically? Also, the genre seems too limited; how can the same aspirations be adopted in competitive genres such as first person shooters and real time strategy games that are popular today?

I hope that this elicits the same tantalizing thoughts that it did for me while I was writing it. As I am tackling these challenges, I will periodically update my progress on the website. Thank you for reading.